Knowing bad news is coming can take the sting out of it, but that doesn’t make it any better when it finally comes.

The sad news, fittingly, was broken on the very show he built, on a platform that only exists because he blazed the path that countless others followed.

BREAKING: Rush Limbaugh's wife Kathryn announces on his radio show that he passed away this morning due to complications from lung cancer

"Rush will forever be the greatest of all time." pic.twitter.com/FSJTfmX8ZO

Rush Limbaugh is one of those people who showed firsthand that the American dream is a blueprint, not a myth.

The man never finished college, but he still went on to stratospheric success the likes of which few could even contemplate.

Here was ‘Bo Snerdly’ reacting to the news, with the response of yours truly attached: 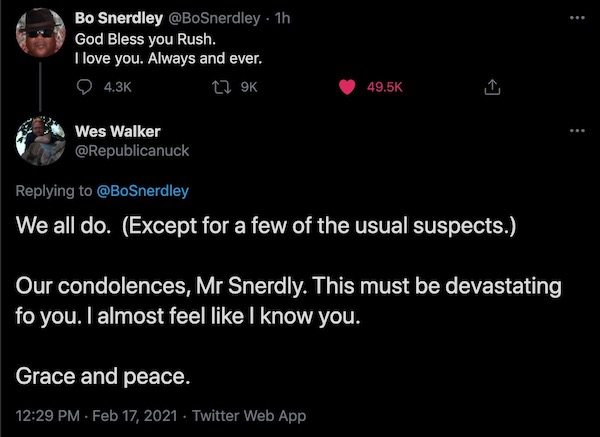 Most people reading a site like ours would echo these sentiments. 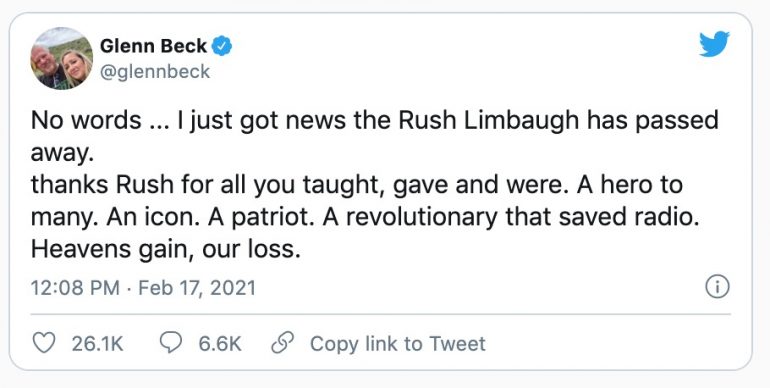 He was rightly called a legend — with his tens of millions of listeners across many hundreds of stations. His talk revolutionized AM band radio when everyone else thought that FM music stations had rendered it obsolete.

His success was not simply handed to him. He had to overcome a helluva lot just to stay in the game, bouncing back from a few hardships that would have caused lesser men to throw in the towel. It really should surprise none of us that he was still sitting behind that famous Excellence In Broadcasting Golden Microphone long after what doctors predicted his expiration date to be. We should have known he was a fighter, as my counterpart put it:

Millions of “Dittoheads” are mourning the loss of an absolute giant of a man who paved the way for all forms of conservative media despite the constant vilification by angry leftists and the “drive-by media” (but I repeat myself), a pain-killer addiction after back surgery, going deaf, and a Stage IV lung cancer diagnosis.

It’s easy to forget all the hardship he went through because he was a champion and not a complainer.

He brought his unique combination of playful wit, deep political insight, and his own kind of natural charm and showmanship together to create something that nobody had tried to pull off before.

It completely redrew the political map. He was the bogeyman Democrats looked for under their bed before going to sleep, frequently mentioned by name. They tried (and failed) to beat him at his own game, even trying to change laws to shut him down (see: fairness doctrine).

The world will likely never know the true extent of his charitable giving, but he and his ‘dittoheads’ had an amazing ability to back a good cause.

Other tributes will center on his accomplishments – which were legion. His friendships. The role he played in mentoring others and changing society.

Many will focus on his passion for all things patriotic, his love of life, and his legacy.

They will recount that glorious moment in which Melania set the Presidential Medal of Freedom across his shoulders in the middle of Trump’s State of the Union speech.

Here are a few examples:

We, like Noem, will focus on a different aspect of his life. One often overlooked.

Here’s how he closed the last show of the year:

I have been blessed. I mentioned to all of you back in the early days, some time… I guess, this might have been in February. It was around, I think, either during or shortly after I had received the Presidential Medal of Freedom at this year’s State of the Union address by President Trump in the House Chamber.

And the poignant October 19th show in which he was candid about the doctors having a tough conversation after a treatment setback:

I know a lot of you out there are going through your own challenges, whether it’s cancer or another medical illness or some other life challenge. Maybe even in the hospital right now. Someone told me — I think this is good advice, may be helpful — the only thing that any of us are certain of is right now, today. That’s why I thank God every morning when I wake up.

I thank God that I did. I try to make it the best day I can no matter what. I don’t look too far ahead. I certainly don’t look too far back. I try to remain committed to the idea what’s supposed to happen, will happen when it’s meant to. I mentioned at the outset of this — the first day I told you — that I have personal relationship with Jesus Christ.

It is of immense value, strength, confidence, and that’s why I’m able to remain fully committed to the idea that what is supposed to happen will happen when it’s meant to. There’s some comfort in knowing that some things are not in our hands. There’s a lot of fear associated with that, too, but there is some comfort. It’s helpful… God, is it helpful. It’s helpful to be able to trust and to believe in a higher plan.