When Donald Trump said that “Fake News is the enemy of the people” it’s precisely this kind of thing that he was referring to.

The Associated Press, which creates the stylebook that is widely used by reporters in the United States for clarity, consistency, and accuracy, has deemed that certain words cannot be used to discuss the situation at the southern border.

Many news organizations have called the situation at the border a “crisis” while others dismiss the term as just another “GOP talking point.”

Julio Ricardo Varela of Futuro Media posted the memo on Twitter when he was sharing his opinion piece in the Washington Post that was urging a change in language surrounding the flood of new arrivals at the southern border. His piece is titled, “Stop using ‘surge’ and ‘wave’ to describe what’s happening at the border.”

In that piece, I found out that the @AP was addressing some of the words used in certain stories. They went on the record with me and also shared an internal memo about their recent decisions regarding immigration stories.

He then posted the images in a thread which are included here: 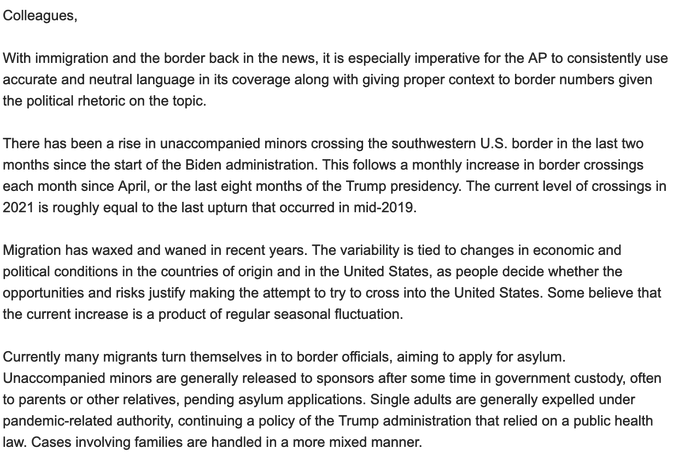 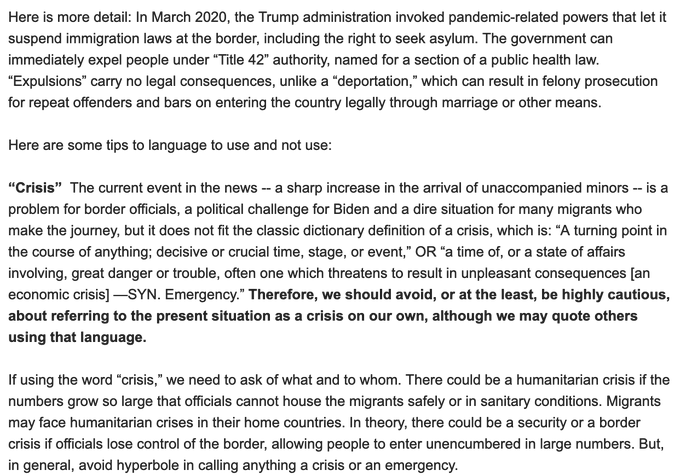 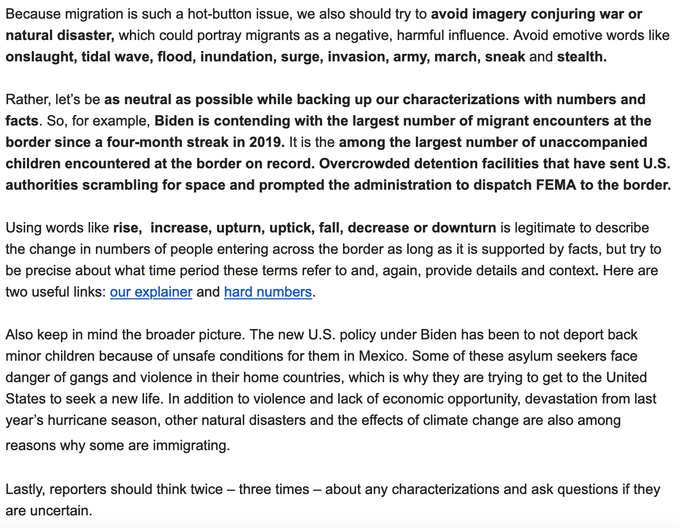 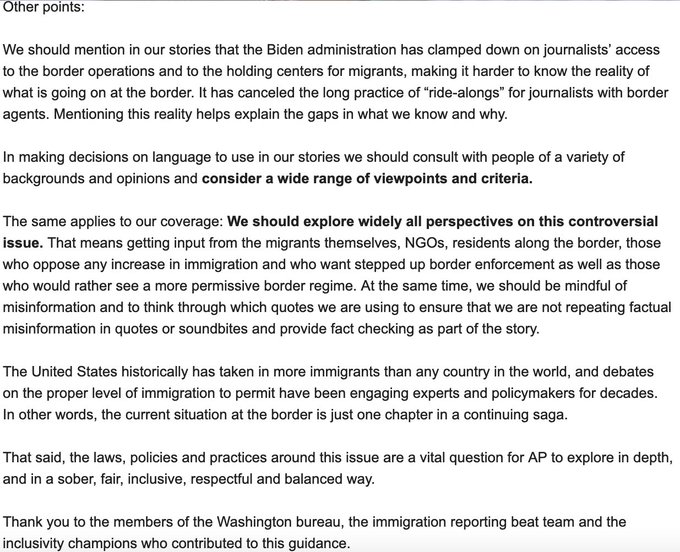 The memo states that although there has been a significant rise in minors entering since the beginning of the Biden-Harris administration, that isn’t a “crisis” or even a “surge.” In fact, it should be expected.

There has been a rise in unaccompanied minors crossing the southwestern U.S. border in the last two months since the start of the Biden administration. This follows a monthly increase in border crossings each month since April, or the last eight months of the Trump presidency. The current level of crossings in 2021 is roughly equal to the last upturn that occurred in mid-2019.

Migration has waxed and waned in recent years. The variability is tied to changes in economic and political conditions in the countries of origin and in the United States, as people decide whether the opportunities and risks justify making the attempt to try to cross into the United States. Some believe that the current increase is a product of regular seasonal fluctuation.

Later in the memo, it says that it isn’t appropriate to use the word crisis.

Here are some tips to language to use and not use:

“Crisis” The current event in the news — a sharp increase in the arrival of unaccompanied minors — is a problem for border officials, a political challenge for Biden and a dire situation for many migrants who make the journey, but it does not fit the classic dictionary definition of a crisis, which is: “A turning point in the course of anything; decisive or crucial time, stage, or event,” OR “a time of, or a state of affairs involving, great danger or trouble, often one which threatens to result in unpleasant consequences [an economic crisis] —SYN. Emergency.” Therefore, we should avoid, or at the least, be highly cautious, about referring to the present situation as a crisis on our own, although we may quote others using that language.

If using the word “crisis,” we need to ask of what and to whom. There could be a humanitarian crisis if the numbers grow so large that officials cannot house the migrants safely or in sanitary conditions. Migrants may face humanitarian crises in their home countries. In theory, there could be a security or a border crisis if officials lose control of the border, allowing people to enter unencumbered in large numbers. But, in general, avoid hyperbole in calling anything a crisis or an emergency.

Wait a second… didn’t they just say that if the numbers grow so large that they can’t be housed safely that could be a humanitarian crisis?

What do you call 400 people in a facility that holds 260 while there is a raging pandemic and everyone else is supposed to maintain “social distancing” guidelines to prevent the spread of COVID?

Apparently to the AP, it’s not a “crisis”.

But maybe it’s not exactly their fault. Perhaps if the Biden-Harris Administration let them visit the facilities they could see that there is a crisis caused by Biden’s broken border.