How do you show appreciation for the man who has done more to contribute to literacy than perhaps any other individual of the 20th Century? You proclaim to the world that he’s a no-good dirty bigot.

That’s how the Left marked Dr. Seuss’s birthday this year… from the Oval Office right on down.

Love that historical revisionism. It was read across America day BECAUSE it was his birthday. Why was HIS birthday chosen for such an honor? Aw, nothing much…

Nearly twenty-five years after his death, Dr. Seuss continues to dominate the world of children’s books to an astonishing degree.

Today, one in four children’s first book is one penned by Theodor Seuss Geisel (Dr. Seuss’s given name). The Cat in the Hat, Green Eggs and Ham, and How the Grinch Stole Christmas!, all published prior to 1970, remain among today’s bestselling children’s books. The Grinch might have stolen Christmas, but Geisel stole all our hearts. –Pricenomics

Six books of his in particular were cited as ‘too offensive’ to be carried any longer.

Six Dr. Seuss books — including “And to Think That I Saw It on Mulberry Street” and “If I Ran the Zoo” — will stop being published because of racist and insensitive imagery, the business that preserves and protects the author’s legacy said Tuesday.

“These books portray people in ways that are hurtful and wrong,” Dr. Seuss Enterprises told The Associated Press in a statement that coincided with the late author and illustrator’s birthday.

“Ceasing sales of these books is only part of our commitment and our broader plan to ensure Dr. Seuss Enterprises’ catalog represents and supports all communities and families,” it said.

The other books affected are “McElligot’s Pool,” “On Beyond Zebra!,” “Scrambled Eggs Super!,” and “The Cat’s Quizzer.”

The decision to cease publication and sales of the books was made last year after months of discussion, the company, which was founded by Seuss’ family, told AP.
—AP

Others were upset by his deliberately provocative political cartoons, which are a different genre and conversation entirely than his childrens’ books.

Here’s the explanation for why they want to pull back from Seuss.

As adored as Dr. Seuss is by millions around the world for the positive values in many of his works, including environmentalism and tolerance, there has been increasing criticism in recent years over the way Blacks, Asians and others are drawn in some of his most beloved children’s books, as well as in his earlier advertising and propaganda illustrations.

The National Education Association, which founded Read Across America Day in 1998 and deliberately aligned it with Geisel’s birthday, has for several years deemphasized Seuss and encouraged a more diverse reading list for children.

School districts across the country have also moved away from Dr. Seuss, prompting Loudoun County, Virginia, schools just outside Washington, D.C., to douse rumors last month that they were banning the books entirely. —AP

We’re running into the very same problem that are raised with so many great artists, authors, poets, musicians, leaders, thinkers, scientists, and businessmen in history. Can you appreciate their contribution without embracing the flaws of the person they are tied to?

Just as a reminder, politicians haven’t always been so woke as to rage against Dr. Seuss: 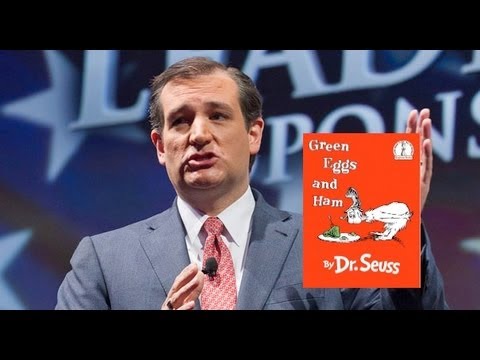 In fact, Seuss may be one of the few things Ted Cruz and this guy could agree on: 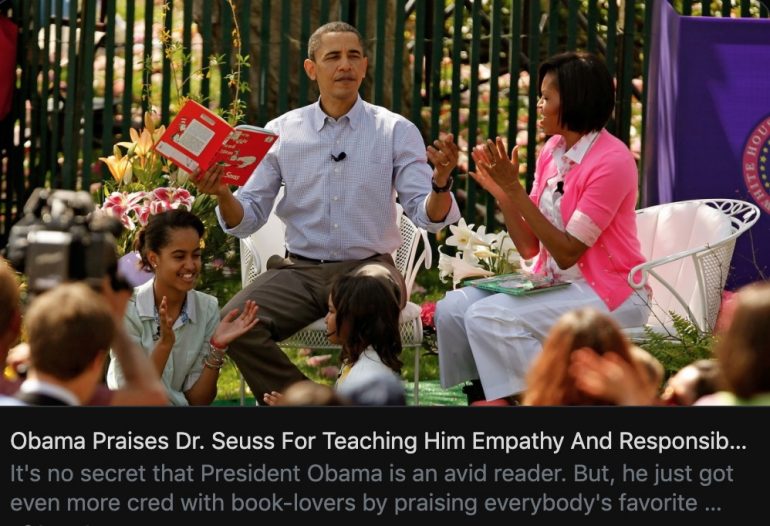 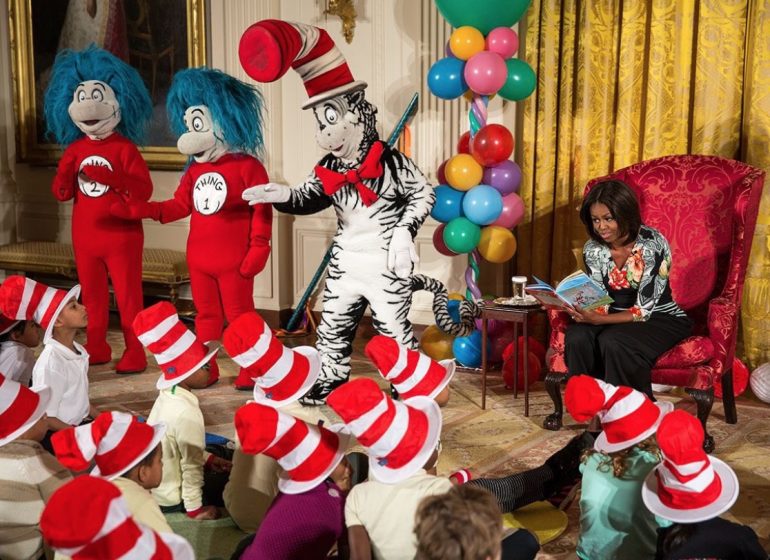 Probably because of lessons like this one, critical of xenophobia: 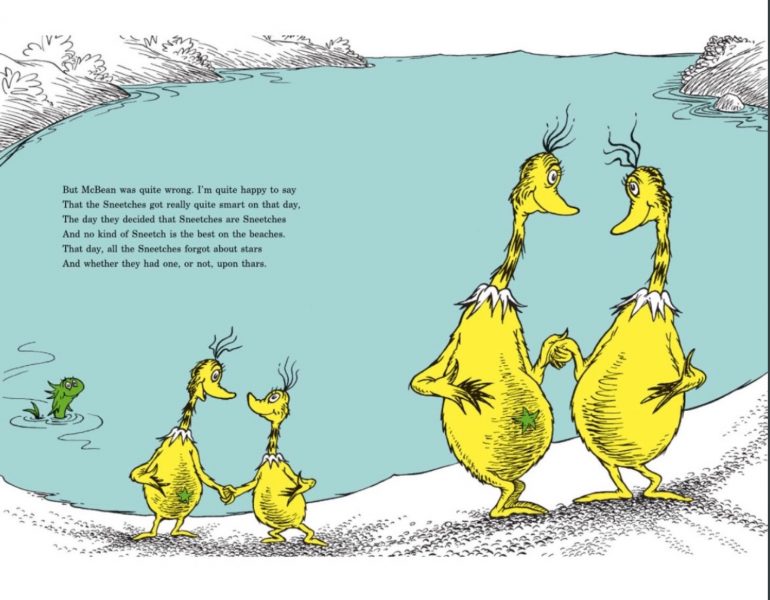 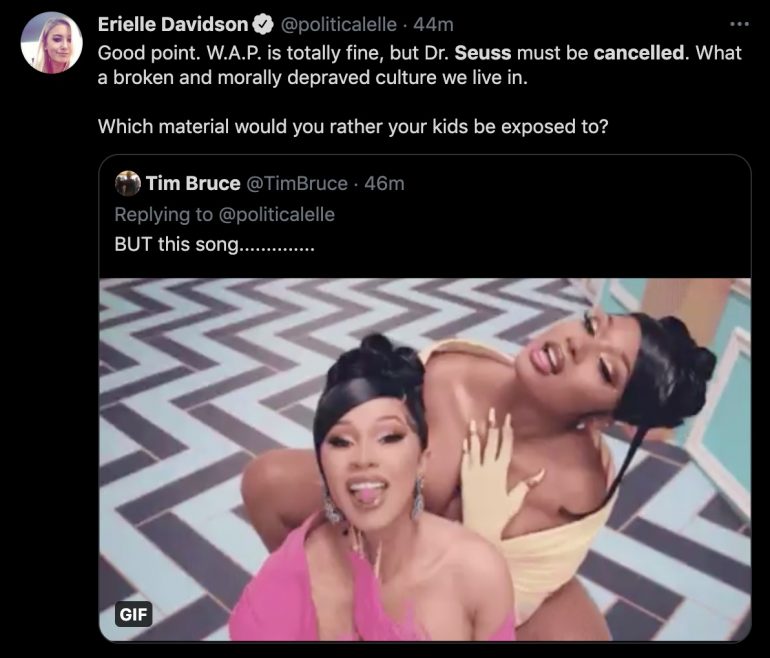 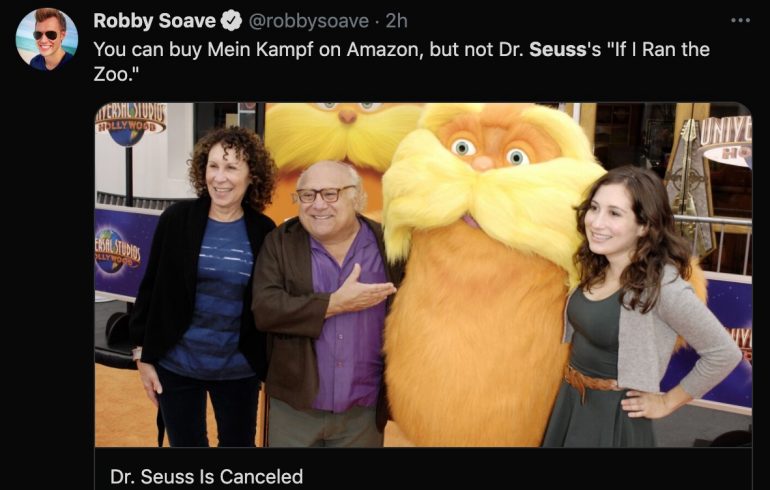 It makes you wonder how we could possibly top this celebration of his birthday NEXT year!

It wasn’t so long ago that ClashDaily referred to the early forms of this leftist authoritarian streak as ‘digital book-burning’.