We already know you are sympathetic to the people trashing the city — they helped elect you and you helped them raise bail. But when will ‘enough’ finally be ‘enough’?

Jim Jordan couldn’t help but notice that the same people so very concerned about threats to the proper running of government that they’ve bubble-wrapped the Capitol in Razor wire and given live ammo to National Guardsmen stationed here have turned a blind eye to actual violence being directed toward a federal building that ISN’T located in the heart of DC.

Rioters have been literally trying to burn down a Federal Courthouse for months — sometimes while people are inside of it. This isn’t a one-off or haphazard event. This is a sustained push toward a stated destructive goal, one of violence directed against a lawful branch of government.

Funny how our legislators don’t care about such things when they happen in faraway cities like Portland so long as they don’t disrupt life in the Beltway.

So Jordan, as part of the House Judiciary committee, wrote a letter to the President.

Here’s what it said:

Anarchaists and violent left-wing extremists continue to vandalize and destroy federal property in Portland, Oregon. Following riots that erupted in May 2020, Portland experienced over 100 consecutive nights of violence as anarchists attacked federal courthouses, small businesses andeven police precincts. In August 2020, amid the chaos and civil unrest, Portland Mayor Ted Wheeler rejected the Trump Administration’s offer to assist in bringing law and order back to the city. Shortly thereafter, the Department of Justice (DOJ) designated Portland as a jurisdiction that has ‘permitted violence and destruction of property to persist’ and one that has ‘refused to undertake reasonable measures to counteract criminal activities.’ We write to request information about the Department of Homeland Security’s (DHS) current efforts to protect federal personnel and federal property in Portland.

The vandalism and destruction of federal and private property that began last summer in Portland has not stopped. On March 10, 2021, DHS removed protective fencing around the Mark O. Hatfield United States Courthouse ‘as part of a broader effort to help the city return to normalcy.’ However, on March 11, 2021, just hours after the fencing was removed, left-wing agitators attempted to force their way into the courthouse and set fire to the building. Some individuals also burned American flags, smashed windows of local businesses, and attempted to storm a local bank. The Federal Protective Service (FPS), a component of DHS, is responsible for protecting federal facilities and the employees and visitors who use them daily.

Since last summer, several federal courthouses and government properties in Portland have been damaged or vandalized. In addition to the Mark O. Hatfield United States Courthouse, left-wing agitators have attacked the Edith Green-Wendell Wyatt Federal Building, the Gus J. Solomon U.S. Courthouse, the Pioneer Courthouse, and the U.S. Immigration and Customs Enforcement building. Although repairs to the federal buildings are ongoing, the current cost of repairs has reached at least $2.3 million. this figure will inevitably rise as repairs continue.

The situation in Portland has been exacerbated by the recent budget cuts to the Portland Police Bureau. On June 17, 2020, amid the chaos and violence, the Portland City Council voted to approve $16 Million in cuts to the Portland Police Bureau, which dissolved its Gun Violence Reduction Team, School Resource Officers, and the Transit Police Division. Between May 29, 2020, and August 27, 2020, federal law enforcement officers arrested over 100 individuals in Portland for crimes including arson, assault, and damaging federal government property.

On February 24, 2021, the Subcommittee on Crime, Terrorism, and Homeland Security held a hearing at which journalist Andy Ngo testified that Antifa and left-wing anarchists in Portland have ‘developed a riot apparatus that included streams of funding for accommodation, travel, riot gear, and weapons which resulted in a murder, hundreds of arson attacks, mass injuries, and mass property destruction. Mr. Ngo stressed to the Congress the importance of not ‘downplaying Antifa’s violent extremism’. Former DHS Deputy Secretary Ken Cuccinelli testified last summer that ‘violent anarchists hell-bent on assaults and destructions’ had caused over 270 injuries to 140 federal law enforcement officers in Portland. He explained that DHS does not need approval form governors of mayors to do its job and that ‘we have the authority and the mission, and we are going to enforce federal law.

The Biden administration has a duty to ensure federal law is enforced and that both federal property and federal personnel are protected and kept safe from violent extremists in Portland. In light of Mr. Ngo’s testimony to the Committee and to better understand the Department of Homeland Security’s efforts to protect federal property, and federal personnel in Portland, we respectfully request the following information:

1) Please explain the actions that DHS of FPS is currently taking to protect federal personnel and federal property in Portland, Oregon.

2) Please explain the current efforts of DHS or FPS to prevent future damage and destruction to federal property in Portland Oregon.

3) Please explain whether DHS still believes that it has the authority, the mission, and the intent to enforce federal law and protect federal property in Portland, Oregon.

Please provide this information as soon as possible, no later than 5pm on April 12, 2021. After you have provided this information in writing, we ask that you provide a staff-level briefing. This briefing may be conducted remotely for convenience and safety issues.

The House Committee on the Judiciary has jurisdiction pursuant to Rule X of the Rules of the House of Representatives to conduct oversight of matters concerning ‘subversive activities affecting the internal security of the United States’ as well as ‘criminal law enforcement and criminalization’. 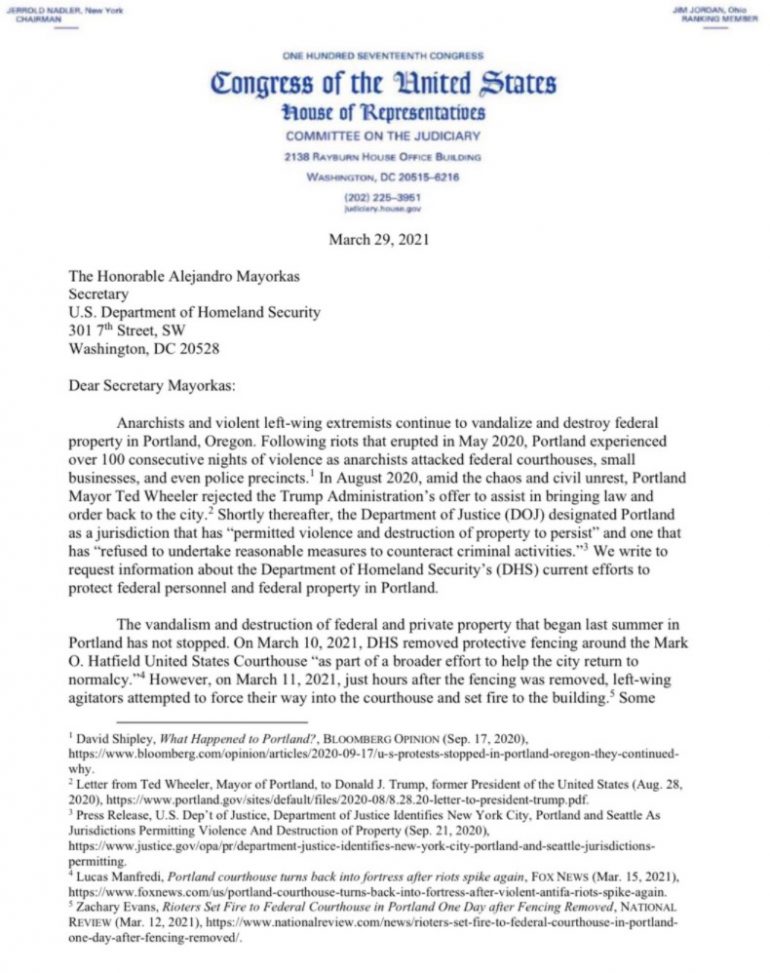 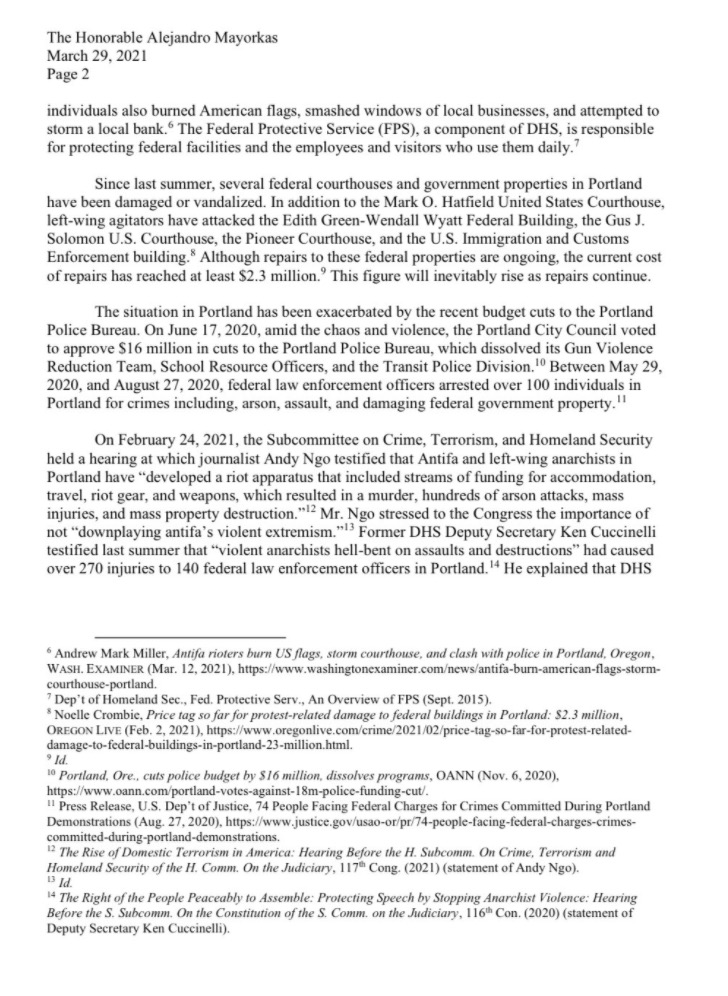 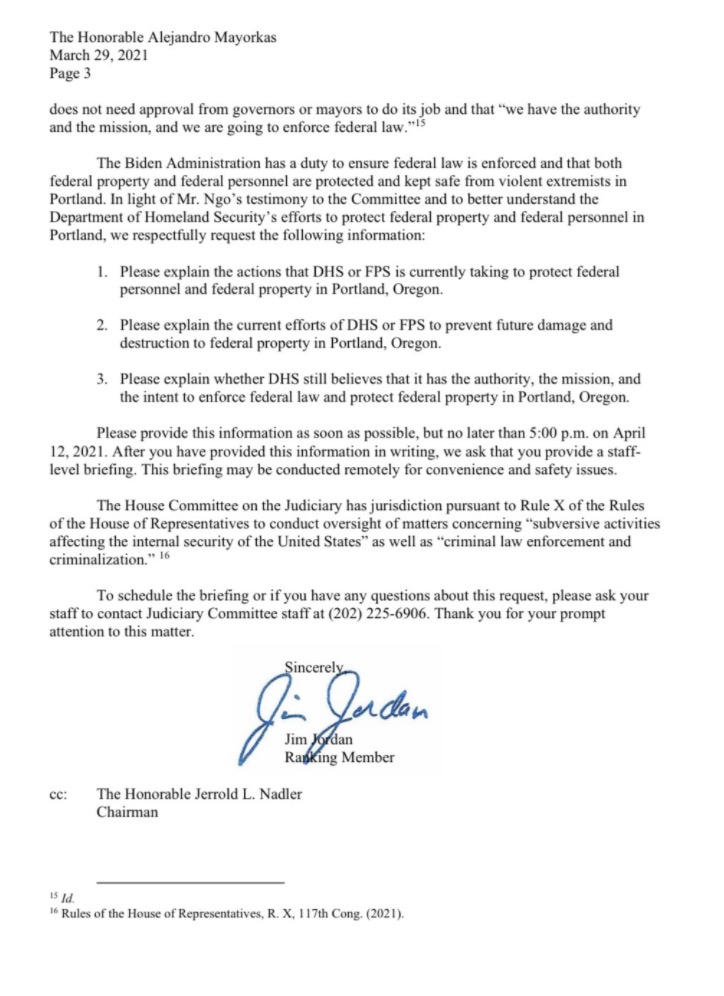