If Trump was the personification of evil over an Obama-era photo of kids in cages, what does that make Joe Biden with this colossal collection of failures?

His party thought it would be a great idea to have a porous border — it would help Democrat chances for elections, forever.

But at what cost?

That ‘compassion’ angle falls apart if they are hurting more people than they are helping. Not just the massive money flowing into the Cartels right now for their human smuggling operations… the other victims too.

Abbott made the declaration at a press conference Wednesday evening, following tips to authorities about the alleged abuse occurring inside the Freeman Expo Center. The facility is currently holding 1,370 migrant children.

‘This facility is a health and safety nightmare,’ Abbot declared.

In addition to the claims of child sex abuse and neglect, Abbott also claimed that there were reports of understaffing, children not eating and the failure to separate children with or without COVID-19.

‘While we wait on the Biden administration to act, I’m directing DPS and Texas Rangers to immediately begin investigation these allegations,’ the Gov. stated.

Abbott did not say how many children had reportedly been abused, but he did say that the claims appeared to be ‘credible’.

In recent days, the number of underage children being held at the Freeman Expo Center has increased from 500 to 1,370, —DailyMail

Sex abuse of children seems like it might be several magnitudes more serious than the ‘children in cages’ that had Democrats so worked up over the last couple of years.

Paging AOC, where are you? 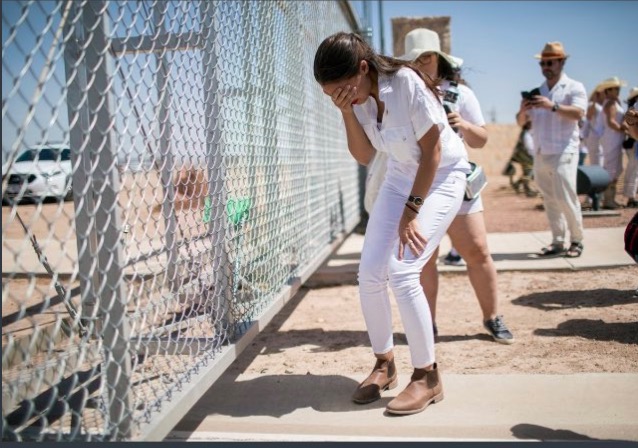 Just days after scrubbing all information about how they are making America LESS safe by creating a crisis on the border that known terrorists have been attempting to exploit, we’re seeing a similar and parallel development.

It’s exactly what we predicted.

An agent from the San Diego sector was searching for “a group of illegal entrants” in a mountainous area around 12:45 a.m. Wednesday when he spotted a half-dozen men “near the border wall,” according to CBP.

Upon questioning, all of the men acknowledged that they had illegally entered the U.S. and were arrested, authorities said.

While being processed at a nearby Border Patrol station, agents discovered one of the men was “a documented MS-13 gang member,” CBP said.

The man, a 28-year-old El Salvadorian national, and the five others — three of whom were also from El Salvador, one from Mexico and one from Honduras — will be sent back to their native countries, the agency said.

Oh, they were sent back?

That’s nothing more than a logistics problem. They know they’ll get in eventually if they keep coming.

Who or what is going to stop them? They already defunded the wall, and the border patrol is so busy rescuing women and children from the hazards of the desert that they hardly have the time to chase bad guys.

Biden has priorities, you see.

And his priorities, in case you haven’t noticed, are obviously: ‘Party before Country’.

What does Joe care? Everyone he cares about lives in a gated community or has security protecting them.