For anyone thinking the Derek Chauvin trial for George Floyd’s death was an open and shut formality on the way to a guaranteed conviction… you’re going to want to sit down for this one.

No, we don’t mean the evidence indicating Chauvin’s weight being between Floyd’s shoulders rather than across his neck, or the phrase ‘if you can talk, you can breathe’ that has come up in testimony.

We mean a change in the official understanding of words exchanged between the police and Floyd during their encounter… an answer that, as the defense would argue, could have completely changed Chauvin’s understanding of the risk factors at play in their interaction.

Senior Special Agent James Reyerson was shown a clip from Minneapolis Police body-camera footage of Floyd saying something while handcuffed and in a prone position on the ground.
“Did it appear that Mr. Floyd said, ‘I ate too many drugs?” defense attorney Eric Nelson asked Reyerson.
“Yes, it did,” Reyerson said.
After a short break, the prosecution played for Reyerson a longer clip of the video that provided the lead up to that comment.
“Having heard it in context, are you able to tell what Mr. Floyd is saying there?” prosecutor Matthew Frank asked.
“Yes, I believe Mr. Floyd was saying, ‘I ain’t do no drugs,” Reyerson replied.
The testimony came on the eighth day of Chauvin’s criminal trial as several investigators and forensic scientists testified about what they found at the crime scene, including Floyd’s blood stains and a few white pills containing fentanyl and methamphetamine. — CNN

Isn’t this exactly the reason we have courts and criminal trials in which the burden of proof is on the state to prove the guilt of the accused, rather than the other way around?

Someone should explain that principle to clowns like these… 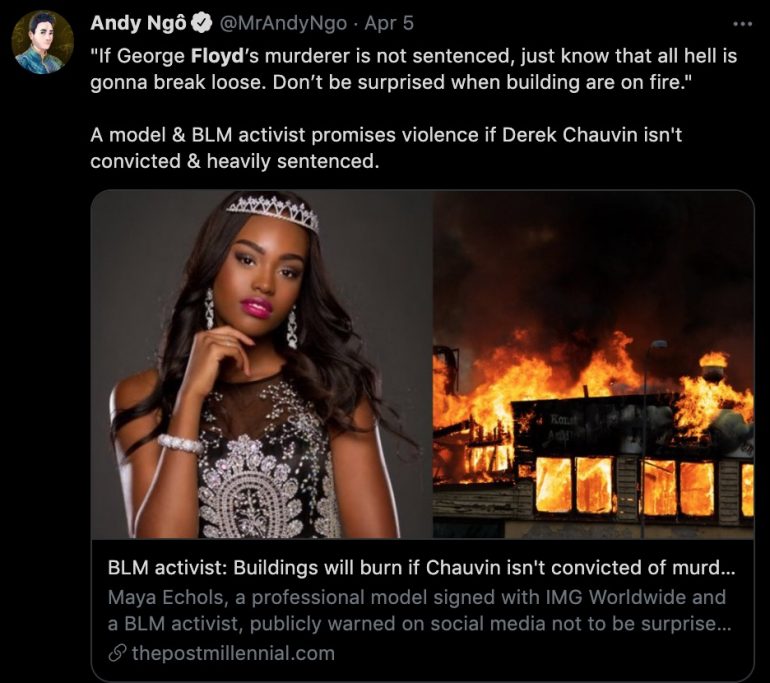 If you live in one of these places, keep your head on a swivel. Things could break bad pretty quickly:

If that scenario does play out, remember who decided that the politics — and not the evidence — should determine the innocence or guilt of an American citizen.

From the beginning, we at ClashDaily have been careful to try and walk that line. Did the video look really damning in the beginning? Oh hell yeah. But there is a difference between dying while in police custody, and dying as the direct result of police action.

That difference is under consideration before a judge and jury who are hearing the details.

Is it a perfect system? Nope.

But it’s the best we’ve got, and a damn sight better than the alternatives.