Remember how hard Democrats worked to tell us that Antifa isn’t even a real entity and that the real domestic terrorists are right-wing militants? How do they plan to explain this?

Officer Swetnick, was an officer on the side of the law in a cause that the Democrats liked. His unfortunate death was elevated to martyr status, where reporters actively fabricated the facts surrounding his death to make it look like he had died of an intentional act of violence — namely, being struck in the head with a fire extinguisher.

We later learned that no such attack happened, but the narrative was already built. If the Democrat-lackey media has anything to day about it, that narrative is now bulletproof and here to stay. (His autopsy report has not been released.)

More recently, another act of violence left an officer dead, and another wounded in a vehicular attack on the Capitol by a devotee to Farrakhan. Strangely the name of that slain officer, who WAS killed through a deliberate act of violence, while mentioned on occasion, is NOT the household name that Swetnick is.

The officer killed in an attack outside the U.S. Capitol Friday died from multiple head injuries, according to the Office of the Chief Medical Examiner.

And little, if anything, is said about the man (or especially the motivations) of the man who murdered Officer Evans. (Even Snopes admits that Farrakhan has called on his followers to murder other Americans for their race. He once said he wanted 10,000 brave men to take up that challenge.)

Constrast that to what’s happening in places like Seattle and Portland, where authorities are letting criminals walk free after rioting and terrorizing people, so that they can do it again.

In some cases high-ranking Democrats (looking at YOU Kamala) have been helping them raise bail money so that they can go out and do it again.

These are the ‘non-existent Antifa groups that people like Nadler laugh off as imaginary.

Well, this ‘imaginary’ group just set a building on fire, with people inside of it, and want to destroy every other law enforcement building in the state.

Their slogan? ‘Every city, every town, burn the precinct to the ground.’

Pretty shocking that people who openly flaunt the laws — and are given free reign to do so — have no respect for laws or property of other people, isn’t it?

Some folks with phones on the scene were able to grab footage of what was going on Saturday night. About 100 ‘Black Bloc’ protesters swarmed the building, with ‘more arriving every minute’ as of reporting just after midnight.

They used a traffic cone to blind the security camera.

Then the ‘activists’ set it alight while drumming and chanting their ‘every city, every town’ mantra.

The Portland ICE facility is currently on fire #PortlandProtests pic.twitter.com/4IrGp4UioR

If Trump were still in office, this poster calling people to join in the mayhem on Saturday might have just as easily been made by one of AOC’s buddies. 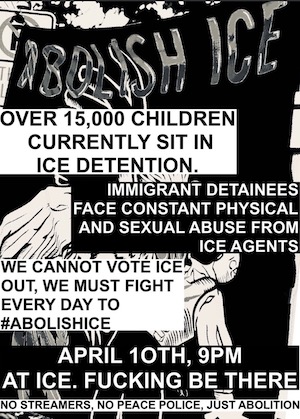 Here’s what happened next…

How long are we supposed to keep doing this dance until we start taking this threat seriously?