It appears that George Orwell was right — some people are more equal than others.

The grift is working just fine for at least one of the co-founders of Black Lives Matter.

Patrisse Khan-Cullors, who has openly admitted that she is a “trained Marxist” is suddenly the beneficiary of a weird combination of both grifting from the racial division pushed by her organization and crony capitalism by “Woke Inc.” that has decided to reward this sort of activism.

Cullors has received undisclosed sums for her best-selling memoir, When They Call You a Terrorist, as well as a “multi-year and wide-ranging” contract with Warner Brothers television to “develop and produce original programming across all platforms, including broadcast, cable and streaming.”

While she rails against inequality in the United States — which she says is due to “systemic racism” — she won’t disclose her net worth or if she’s even paid by Black Lives Matter which is a fundraising juggernaut and an overtly partisan organization.

Whatever she’s making, life has been good for Cullors. Cullors has amassed quite a real estate empire worth approximately 3.2 million. She now owns 4 homes — which is one more than “Democratic Socialist” Senator Bernie Sanders owns. That just goes to show you that pushing full-blown Marxism is much more profitable than the mealy-mouthed “democratic” socialism.

So far, she has two homes in L.A., one in Georgia, and the most recent purchase, a $1.4 million home in Topanga Canyon, California raised eyebrows because 88% of the population there is white while only 1.8% is black.

In addition to those 4 properties, Cullors and her BLM Canada activist wife, Janaya Khan, have been shopping for a cozy, vacay home in an exclusive, “celebrity beachfront enclave” in New Providence, Bahamas. The units there sell between $5 million and $20 million. No purchase has been confirmed, but if the Khan-Cullors did snag a spot there, they would be neighbors would include Justin Timberlake and Tiger Woods. 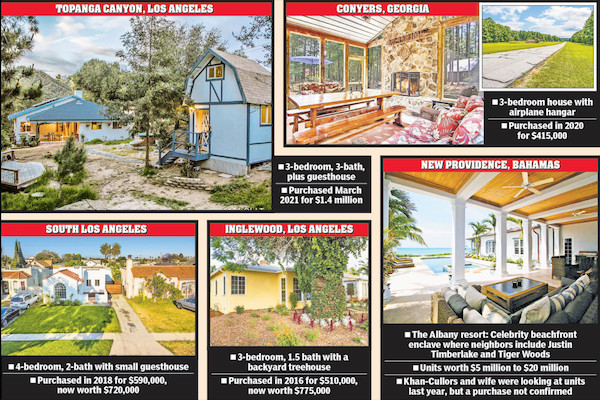 The self-described Marxist last month purchased a $1.4 million home on a secluded road a short drive from Malibu in Los Angeles, according to a report. The 2,370 square-foot property features “soaring ceilings, skylights and plenty of windows” with canyon views. The Topanga Canyon homestead, which includes two houses on a quarter acre, is just one of three homes Khan-Cullors owns in the Los Angeles area, public records show…

…Last year, Khan-Cullors and spouse Janaya Khan ventured to Georgia to acquire a fourth home — a “custom ranch” on 3.2 rural acres in Conyers featuring a private airplane hangar with a studio apartment above it, and the use of a 2,500-foot “paved/grass” community runway that can accommodate small airplanes.

The three-bedroom, two-bath house, about 30 minutes from Atlanta, has an indoor swimming pool and a separate “RV shop” that can accommodate the repair of a mobile home or small aircraft, according to the real estate listing.

The Peach State retreat was purchased in January 2020 for $415,000, two years after the publication of Khan-Cullors’ best-selling memoir, “When They Call You a Terrorist.”..,

Two years later, in 2018, Khan-Cullors purchased a four-bedroom home in South Los Angeles, a multi-ethnic neighborhood. Khan-Cullors paid $590,000 for the 1,725 square-foot home, although the price has since climbed to $720,000, according to public records.

Not too shabby for a 37-year old “trained Marxist” who grew up in a housing project in Van Nuys, eh?

So, she’s a Marxist…who benefits from capitalism and then criticizes it.

Black Lives Matter is an organization that — just like socialism — has made the higher ranks rich while the “proles” suffer and give what little they have to the people at the top hoping that their lives will somehow improve.

And it’s an awful grift at that — it’s picking at the scab of racism because, in America, even racist grifters can make it to Topanga Canyon, California.

Black Lives Matter isn’t embraced by all black Americans, despite what the Corporate Media insists.