Just hours before Capitol Police officer Billy Evans will lie in honor in the Capitol Rotunda because he was killed by a follower of the Nation of Islam while on duty, former Nation of Islam blogger-turned-Congresswoman Rashida Tlaib calls to defund the police. You just can’t make this up.

Before the fact-checkers go mental about calling Tlaib a “Nation of Islam blogger”, it’s clear that she did write some articles for Louis Farrakhan’s blog. It’s unclear exactly how much she wrote, but…writing articles for a blog makes one a blogger, correct?

It’s pretty disgusting when you put it that way, but this is Rashida Tlaib we’re talking about — “disgusting” seems to go with the territory.

In the wake of the death of Duante Wright in Brooklyn Center, Minnesota on Sunday, and the Monday release of the bodycam footage that appears to show that it was a horrible, horrible accident, Congresswoman Rashida Tlaib (D-MI) has called to abolish the police and prisons because the entire system is irreparably racist.

It’s interesting that Tlaib is using this particular case to make this point because there was a warrant out for Duante Wright for possession of an illegal Ruger .45 pistol. He was also resisting arrest at the time of the clearly accidental shooting.

Yet, Tlaib says that the terrible incident “wasn’t an accident” and called it “government funded murder.” 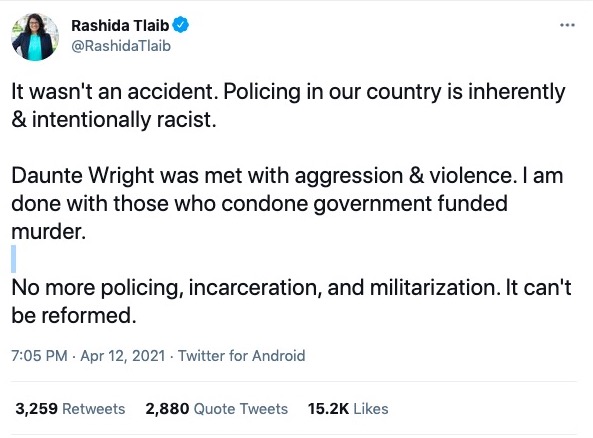 This shouldn’t be a surprise for the “Squad” member, she’s supported defunding the police when she backed the BREATHE Act, and has tweeted support for the BLM grifters’ petition to defund police in the wake of the death of George Floyd.

Perhaps she’s not a fan of law enforcement after she was escorted out of a Trump rally back in 2016 after being a disruption.

Still, it’s a bit weird since Rep. Tlaib has called for the arrest of Trump White House officials…

Who would do the arresting, Rashida? Where are they going to be held?

She’s a typical leftist who wants to remove protections from you while she’s still protected.

She is tweeting this while the Capitol has fencing around it and thousands of National Guard troops stationed there to protect them from the alleged “insurrectionists” that never show up.

National Guard troops have been in D.C. since the riot on January 6 and they may stay there until the fall.

Do you think that Rep. Tlaib wants them sent home? Hell, no!

This was Congresswoman Tlaib’s speech on the floor about the riot in D.C. on January 6 which the Democrats and corporate media have labeled an “insurrection.” The kicker? She wasn’t even in Washington on January 6.

Notice in her speech that she talks about how afraid she was for herself and her family because of a threat made against her before she was even sworn in. She relied on law enforcement to investigate it and keep her safe, but she doesn’t want the same for you.

If the idiot Democrats follow through on this against the will of the vast majority of the American people — including their own base. What we’d get is a deeply tiered society where the “haves” will be able to provide private security for themselves while the “have-nots” will be forced into a state of lawlessness and chaos and it’ll be like The Purge, only it’s every day. It’ll devolve into an artificially structured system where warlords (for lack of a better term) take over just like they did in all of those “autonomous zones” where police aren’t welcome.

America will cease to be a nation of laws because there will no longer be anyone there to enforce them. And if there’s no longer the rule of law, then what purpose is there for Congress?

It’s astounding that a lawmaker has tweeted this.

Perhaps she hasn’t read dystopian fiction or watched The Walking Dead to see what happens when society falls apart. Or maybe it’s just that a blithering idiot was elected in Michigan’s 13th Congressional district.

Dem leaders have distanced themselves and rejected calls to defund the police. Here, in the wake of the fatal police shooting of Daunte Wright, Rashida Tlaib says: “no more policing…It can’t be reformed.” https://t.co/XG2SHteZZB

Totally agree. No more police. Instead, let rich people hire private security for their neighborhoods and poor people can do community watch or whatever. https://t.co/WHrbAE9wXu

Terrorist-sympathizing Democrat member of Congress calls for a ban on police.

Gonna go out on a limb and assume she only thinks police should stop protecting other people and that she’d have a meltdown if they refused to respond to her calls for help. https://t.co/KtVFMWDudF

What a piece of work this woman is https://t.co/lUfTBK3z9H

Rashida Tlaib is a US congresswoman surrounded by razor wire, National Guardsmen and police protecting her from a phantom menace. She just doesn’t want protection for you, your family or your community. https://t.co/j92xPPlmKz

So you’re calling for the dismantling of the Capitol Police, right? They need to go first. They’re literally outside your office every day.
Must be horrible for you.
Just to be clear @CapitolPolice need to go first, right? https://t.co/s0Nm8oJhIJ

You are a lawmaker.
Your job is to very literally uphold the law.

How do you imagine the laws you help create will be enforced? https://t.co/c2l233VBYD

This is about the most low-life statement even a race hustler like Rashida Tlaib could make. The bodycam makes it clear it was an accidental shooting. There is nothing systemic about it. Tragedies happen sometimes when people attempt to flee arrests.https://t.co/hOV3qNgNcQ

#Rep. #Tlaib needs a wake up call. When we as #Muslims are attacked- such as she & I have been, when our masjids, mosques, are attacked- who do we call? Not Ghostbusters! #Defundthepolice scares moderate #Democrats & most Muslims. We will likely lose Dems if we continue w this https://t.co/XwnVeov8mY