There was to be a meeting at the Timberlane Regional School Board. Concerned parents were going to raise the issue of the mask mandate. They never got the chance.

Chairwoman Kimberly Farah shut down the meetingin Atkinson, New Hampshire before it even got off the ground.

New Hampshire was on well on their way down the right track to freedom. Or so you might have thought. After all, the Governor tweeted this: 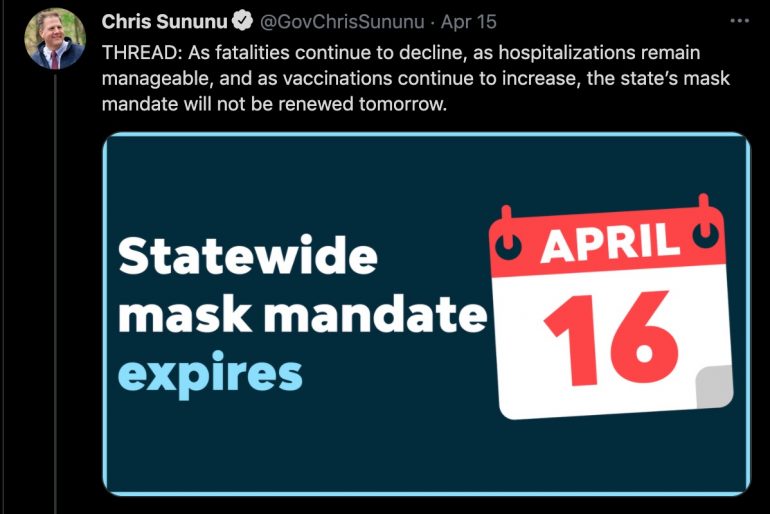 Since the Governor had let the mask mandate lapse more than a month ago, and they have a high rate of vaccination participation in New Hampshire, parents were coming together to insist that the mask mandate for schools be likewise rescinded.

Among the petitioning parents was Kate Bossi, a Sunday School teacher.

She never got her exercise her First Amendment right to address her concerns to elected officials. Instead, she was hauled away by police, and charged with ‘disorderly conduct’ because she was not wearing a mask in the room where the meeting was to be held.

This group was very rational in their disagreement with the police. They were neither insulting or angry in asking evidence that there was actually a written law in force which authorized the police to take the action they were taking. They also made it known that if they unlawfully laid hands on them to prevent them from acting on their First Amendment rights as a citizen, future legal action was not off the table.

They expressed their intention to participate in the meeting, and police forbade them entry. They said, that’s ok. We’ll go around. Police intercepted and grabbed at them. But their line was broken and other parents slipped through the gap.

One of the ladies present — Kate Bossi — was quickest to slip through the gaps in the gauntlet and make her way into the auditorium with her protest sign. Police quickly caught up with her, and brought out the handcuffs, arresting a Sunday School teacher in front of some watching children.

From the video description:

ON 05/20/21 THERE WAS A SCHOOL BOARD MEETING THAT WAS TAKING PLACE AT THE TIMBERLANE REGIONAL HIGH SCHOOL IN PLAISTOW, NH. THE SCHOOL BOARD SHUT DOWN THE PUBLIC MEETING REGARDING THE SCHOOLS MASK GUIDELINES BECAUSE SOME PARENTS WERE NOT FOLLOWING POLICY FOR WEARING MASK IN A PUBLIC BUILDING, WHICH IS ONLY FOR FACULTY AND STUDENTS.

A YOUNG SUNDAY SCHOOL TEACHER WAS ARRESTED UNLAWFULLY FOR DISORDERLY CONDUCT BY SERGEANT PORTER OF THE PLAISTOW, NH POLICE DEPARTMENT. SHE WAS ATTENDING THE BOARD MEETING WITH SEVERAL OTHER PARENTS ON THIS DAY WHILE ALSO EXERCISING THEIR RIGHTS TO ASSEMBLE AT A PUBLIC MEETING.

I SPOKE WITH ANOTHER YOUNG LADY WHO’S MOTHER WAS UNLAWFULLY ARRESTED AND SUPPORTED THEM BOTH BY GOING TO THE POLICE DEPARTMENT AND CONTINUE COVERAGE OF THIS INCIDENT.