The West didn’t wait for the usual cautious slow-walk of the COVID vaccine to run the gauntlet of years of testing. The urgency of the pandemic conditions was justification enough to set aside that caution. So long as they had reason to believe that patients would survive the ‘jab’ without death or significant injury, they ramped up production so they could start putting it into arms as quickly as we could.

This was considered ‘following the science’.

The ‘experts’ in academia, for some reason, did not apply that same standard to the desperate situation in non-Western countries.

COVID was raging through India like wildfire. The nation, already economically disadvantaged, saw critical supply failures in hospitals. They ran out of Oxygen for treating the ill. They could not keep up to the growing case rate. Their situation was desperate, and waiting around for vaccine delivery at some point in the future was NOT an option.

They turned their attention to treatment options… and one particular treatment regimen caught their attention. But when they brought it up, the World Health Organization wagged their finger at them.

Here was the solution Goa, on India’s west coast, was proposing:

All adults in Goa will be given Ivermectin, irrespective of their vaccination status, to prevent complications arising out of Covid-19 infection. Ivermectin is a drug used to treat many types of parasite infestations, and it does not prevent Covid-19, but can help reduce the severity, said state health minister Vishwajit Rane.

“I have given instructions for immediate implementation of prophylaxis (action taken to prevent disease) treatment,” Rane said.

“People will be given Ivermectin 12mg for a period of five days. Expert panels from the UK, Italy, Spain and Japan, found a large, statistically significant reduction in mortality, recovery time, and viral clearance in Covid-19 patients treated with Ivermectin,” Rane said on Monday. — Hindustan Times

Here is the World Health Organization advising against it.

A day after Goa prescribed Ivermectin for all those above the age of 18, Chief Scientist at the World Health Organization (WHO) Dr Soumya Swaminathan Tuesday said the global body recommends against the use of the drug, except within clinical trials.

“Safety and efficacy are important when using any drug for a new indication. WHO recommends against the use of ivermectin for #COVID19 except within clinical trials,” Dr Swaminathan tweeted. — IndianExpress

We note, this is not some junior official somewhere. This is their ‘chief scientist’ making recommendations against it.

The great thing about scientific claims is their testability. If you predict ‘x’ result, and the opposite happens, you have to scrap your theory and go back to the drawing board. But if your prediction holds up, there’s a real possibility you are on the right track.

Let’s check in on the data.

Here’s a chart. The greyed in area on the right-hand side indicates when the Ivermectin protocol was initiated. (Charts below sourced from this website.) 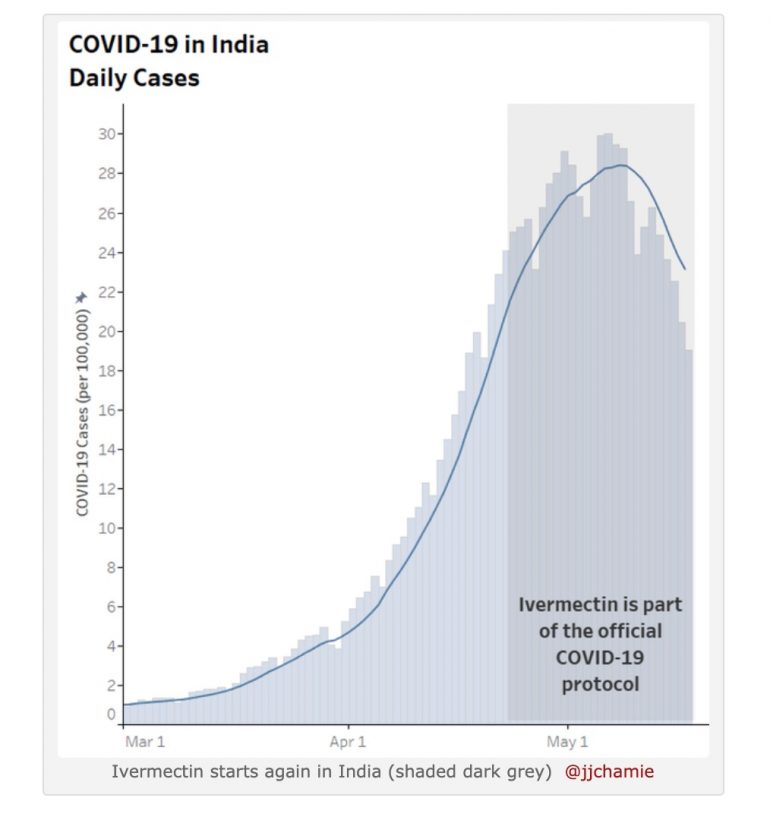 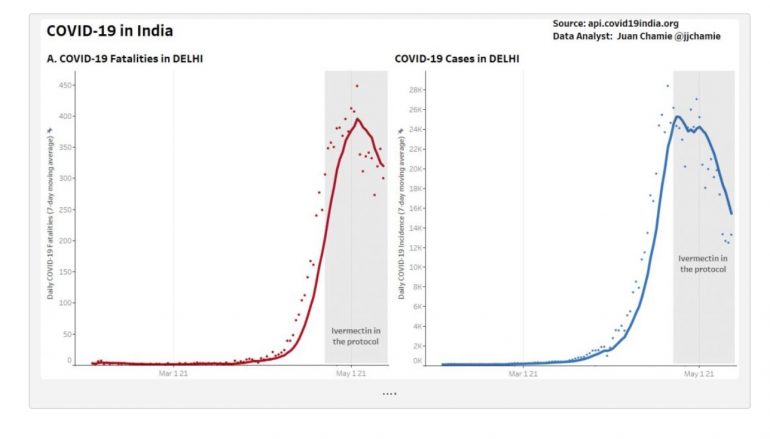 From that same article:

Just three weeks after adding Ivermectin, Delhi now leads India out of the deadly second surge of the COVID pandemic. Cases that had peaked at 28,395 on April 20 plummeted nearly 80% to just 6,430 on May 15. Deaths peaked May 4, and now they are also down 25%.
Meanwhile, three other Indian states have followed Goa’s lead in adding Ivermectin: Uttarkhand, Karnataka, and Uttar Pradesh. And, as expected, they have seen a drop in new daily cases as well, with Uttar Pradesh down nearly 75% from a peak of 37,944 just four days after they began following the April 20 AIIMS guidance to just 10,505 on May 16.

Ivermectin is cheap — 50 cents a dose. It is an old drug. With a long-standing history. Problem is, with a cheap drug, nobody gets to profit off the fear with shiny new patents.

3 weeks ago a doctor in India posted this prediction about the implementation of #ivermectin. I was curious how things have matched up.. #ivermectinworks #COVID19 #coronavirus & @mountainvmd is working on making ivermectin strips (like listerine strips) for preventing #SARSCoV2 pic.twitter.com/KhoAZWeKhT

Scientific theories are tested by contrasts. Another state used Ivermectin, for a few days, but switched to the much more expensive ($3000/patient) drug, Remdesivir. For all the extra money spent, did they have similar bounceback to Goa and Delhi? Sadly, they did not. The curve in Tamil Nadu is still shaped like a hockey stick.

When we shared stories about this same treatment being used with good results, our site was one among many that took a massive hit in advertising dollars for violating COVID dogma.

Related:
Two Scientists Discuss Ivermectin As A Possible COVID Treatment — Watch It While You Still Can!

Even videos featuring a Congressional Hearing on this same treatment back in October or November of 2020 were blasted off the internet. It was touted as a cheap and effective remedy to save lives. But the internet overlords forbade us to speak of it.

How many lives in America (and around the world) were lost because Twitter, Facebook, the News Media and even our vaunted ‘scientific’ agencies threw a cone of silence around any dissenting opinion believing they had an absolute lock on truth and no dissenters should be permitted to speak? It would be a damm shame if the victims’ families were to file a class-action lawsuit over this, wouldn’t it?

After decades of hearing about the corruption and greed of Big Pharma, how is it that the same voices that warned us forever are suddenly shilling for them?

Remember back when journalists were expected to say ‘follow the money’? Whatever happened those days?