This is the awkward moment when Democrats abandon every talking point they have used to justify Big Tech as ‘private companies’ abusing their monopoly to censor the right.

The shameless reversal is equal parts hilarious and damning.

It may come as a surprise to Democrats, but Church membership is not a ‘human right’. Neither is their participation in Communion.

A vote this week set off a firestorm.

The U.S. Conference of Catholic Bishops (USCCB) voted overwhelmingly to draft a formal document on the meaning of the Eucharist after a contentious debate on whether President Biden and other politicians who support abortion policies are worthy of receiving Communion at Mass.

More than 73% of the U.S. bishops casting ballots at a virtual conference this week supported tasking the USCCB’s doctrine committee to draft language on maintaining consistency with the Eucharist. A section of the document is expected to include a specific admonition to Catholic politicians and other public figures who disobey church teaching on abortion and other core doctrinal issues.

This moves the policy forward to the next step, where adoption of the language will be voted on by the next gathering in November.

The Roman Catholic Church has consistently condemned abortion — the direct and purposeful taking of the life of the unborn child. In principle, Catholic Christians believe that all life is sacred from conception until natural death, and the taking of innocent human life, whether born or unborn, is morally wrong. The Church teaches, “Human life is sacred because from its beginning it involves the creative action of God and it remains for ever in a special relationship with the Creator, who is its sole end. God alone is the Lord of life from its beginning until its end: no one can under any circumstance claim for himself the right directly to destroy an innocent human being” (“Donum vitae,” 5). —CatholicNewsAgency

There seems to be some confusion about Communion being a ‘right’ due to anyone who wants it.

Far from it. Jesus talked about having your heart right before bringing your gift to the altar in his Sermon On The Mount (Matthew 5:24). And in the very passage from which churches (Catholic and otherwise) model the practice of celebrating the Lord’s Table, we see a warning mixed in with the instructions, the precise interpretation of which we will leave to those better qualified to explain it.

Whoever, therefore, eats the bread or drinks the cup of the Lord in an unworthy manner will be guilty concerning the body and blood of the Lord. Let a person examine himself, then, and so eat of the bread and drink of the cup. For anyone who eats and drinks without discerning the body eats and drinks judgment on himself. That is why many of you are weak and ill, and some have died. But if we judged ourselves truly, we would not be judged. But when we are judged by the Lord, we are disciplined so that we may not be condemned along with the world. —ICor 11

Why would these bishops single out politicians for pushing abortion? It’s simple, really. Because in this country, elected politicians are the ones who define policy and build the rules of the society in which they live. The dogmas of the secular world pull people in one direction, which is contrary to the established moral framework of the Church and the entirety of Christian history.

Politicians on the left have demonstrated a blind devotion to capital-a Abortion. They insist it must be made available at any time, for any reason. That commitment bears a strong resemblance to a secular version of sacramental belief.

They seem to forget the fact that only 7 countries in the entire world even allow abortion to be practiced beyond 20 weeks, and only 5 countries (including ours) permit it at all beyond 24 weeks. Aside from Canada [which *only* lacks abortion laws because their politicians were too gutless to write revised legislation, even when their Supreme Court ordered old laws they were striking down to be replaced] the other three countries that allow unlimited abortion are: China, North Korea, Vietnam. –(Source)

That is the global context in which the abortion issue and the bishop’s response to it should be viewed. Yet, Democrats are rabidly and blindly in support of abortion, as though it is an objective moral good.

Now we have the perspective to look at the left’s reaction to this news and see it for what it really is — their petty demand that the CHURCH reject their own traditions and beliefs so that they adapt to the secular orthodoxy whose anti-gospel the Democrats are now preaching.

Just a few months ago the Left was trying to frame Biden as a ‘better person’ because he was so amazing in his Catholic faith, just look at how big his bible is, and did you see that Joe was IN a church when Trump was doing a photo op in front of one? Yadda, yadda, yadda.

Cue the outrage, demanding the Church adapt to their demands. And watch for the threats and the ‘separation of church and state’ references. Their lack of self-awareness is breathtaking.

Let’s begin with the rank-and-file reactions of the left, and save the ridiculousness of Democrat leadership for last: 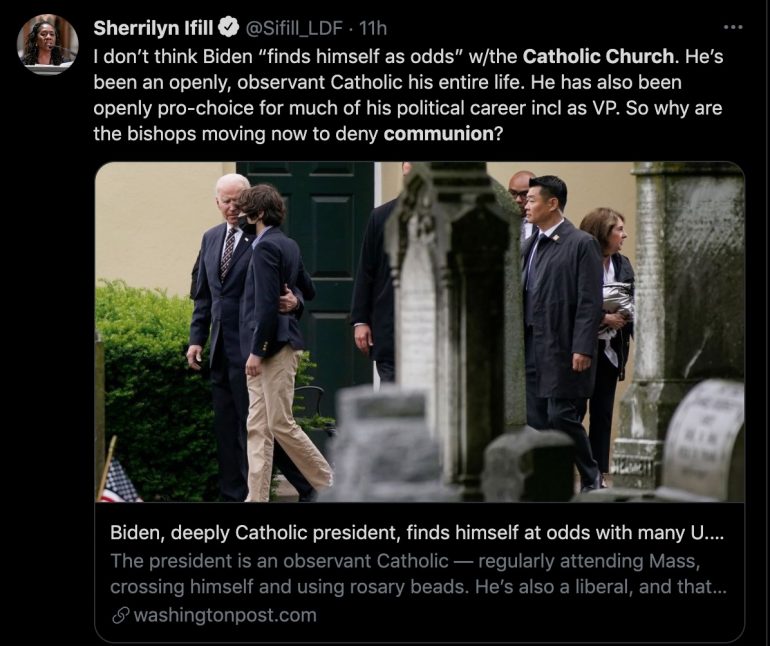 Elected Democrats are taking this personally…

Where are the ‘church and state’ people where elected officials are banding together to tell a religious organization what faith and practice it needs to hold to?

NEW: 60 Catholic Democrats in the U.S. House of Representatives issued a “Statement of Principles” with a message to U.S. bishops that “the weaponization of the Eucharist to Democratic lawmakers for their support of a woman’s safe and legal access to abortion is contradictory”. pic.twitter.com/IeR3gSbzDJ

…whatcha gonna do to them if they deny you communion, form some kind of a political showtrial to punish the Arch-heretics who defy your Secular Orthodoxy?

And what about that super-Catholic the left gushed about with his big Bible?

It is going to happen. The do not want divorced people getting Communion but baby murderers are OK? How many dead babies are “good Catholics” Biden and Nancy Pelosi responsible for? https://t.co/tmkrskv8NT

Never mind. The left has already got the milage they wanted out of that by portraying Joe as the better Christian than Trump.

Now they can all go back to hating Christian churches, threatening them with loss of tax exempt status, and demanding they bow the knee to every passing political whim — or else they’ll be slapped with a lawsuit to cow them into obedience. Just like his good buddy Obama did with those nuns objecting to the birth control mandate and with the Romeike family.