We all remember that early on Fauci was saying that you don’t need a mask, then he flipped to his “wear a mask” zealotry. He says that was because of The Science™ but that’s not what his emails reveal.

It seems Saint Fauci was following actual science when advising Obama’s former Health And Human Services Secretary Sylvia Burwell about masks in his response to her February 4, 2020 email. She wrote, “Tony … I am traveling to [REDACTED]. Folks are suggesting I take a mask for the airport. Is this something I should do.”

The next day, Fauci responded:

Sylvia: Masks are really for infected people to prevent them from spreading infection to people who are not infected rather than protecting uninfected people from acquiring infection. The typical mask you buy in the drug store is not really effective in keeping out virus, which is small enough to pass through the material. It might, however, provide some slight benefit in keep[ing] out gross droplets if someone coughs or sneezes on you. I do not recommend that you wear a mask, particularly since you are going to a very low risk location. Your instincts are correct, money is best spent on medical countermeasures such as diagnostics and vaccines. Safe travels. 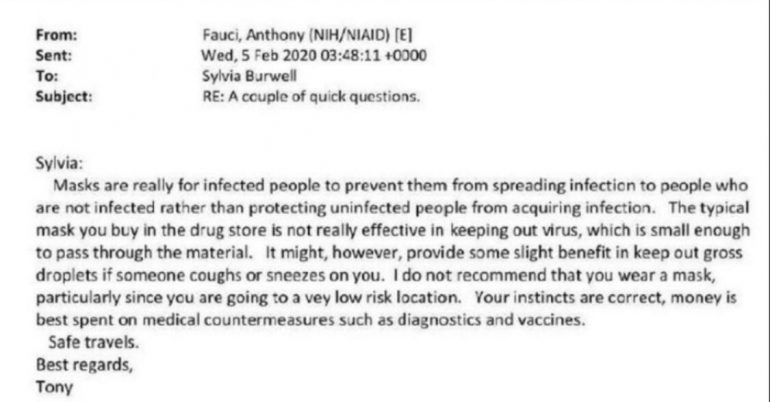 While fact-checkers are desperately trying to spin this as “lacking context” or proof that he “evolved” his position as new information came forward about asymptomatic spread, that doesn’t make sense if you look at his reasoning behind why masks don’t really work. What Fauci said to Burwell is that virus particles are small enough to “pass through the material” but might “provide some slight benefit in keeping out gross droplets.”

It also keeps to accepted science that masks are to prevent people who are infected from spreading the illness. While there was beginning to be some concern about “asymptomatic spread” the focus was also on spread through droplets and fomites–surfaces that can spread the virus due to infectious droplets that land on them. Remember people Lysoling their groceries and the paranoia about doorknobs? That’s because the experts believed that virus on surfaces spread the illness.

So why did Fauci change his position in March so suddenly? Well, after his now-famous appearance on 60 Minutes saying that people don’t need to be walking around wearing masks, he received an email with the subject line, “Great advice from Chinese expert.”

On March 8, “60 Minutes” broadcast a now-infamous interview with Fauci in which he insisted: “There’s no reason to be walking around with a mask,” in part because “it could lead to a shortage of masks for the people who really need it.”

Eight days after the interview aired, Fauci received an email from a man named Michael Liu with the subject line: “Great advice from Chinese expert.” The expert Liu cited was Dr. Wenhong Zhang, the head of the infectious disease unit at Huashan Hospital in Shanghai. The email did not mention that Zhang is a Communist Party official who first gained media fame in China when he announced in January 2020 that he would send doctors and nurses who were Party members to front-line hospitals.

“Thank you for your note,” Fauci responded. “We indeed have learned much from our Chinese colleagues. I appreciate your bringing these issues to our attention.” He signed the message: “Tony.”

After that, Fauci became much more open to the idea of widespread masking. On March 31, 2020, he sent an email to a Dr. David Katz of La Jolla, CA, saying, “There are some data from NIH that indicate that mere speaking without coughing elicits aerosols that travel a foot or two. If that is the case, then perhaps universal wearing of masks in the most practical way to go.”

While the aerosolized particles only travel one or two feet, that’s far shorter than the six feet of “social distancing” and a mask isn’t going to stop an aerosolized particle, so…what’s the point? The interesting thing to note is that Fauci mentioned aerosols, which the CDC didn’t admit was a possibility of spread until October 2020.

But then, like Fauci, the CDC has said some pretty weird things in the past year:

Just this calendar year, Fauci has said that vaccinated people should wear masks, then does an about-face saying they don’t, says that children should wear masks when playing with other children, and suggested that double masks were necessary. He also said that perhaps masks should be worn during flu season every year because the masks seemed to have stopped flu cases this season…but they didn’t seem to stop the coronavirus. Fauci doesn’t mention that last part.

Fauci has flipped and flopped and it wasn’t always because of The Science™–he tossed that aside when it was convenient.