Peter Daszak personally thanked Dr. Fauci in an April 2020 email for publicly dismissing the theory that the novel coronavirus could have been the result of a lab leak.

There are some interesting little tidbits hidden in a newly-released trove of email correspondence of Dr. Anthony Fauci. Over 3200 pages of documents were obtained by BuzzFeed News as a result of a FOIA lawsuit and 866 pages were obtained by the Washington Post through a FOIA request. It will take quite a bit of time to go through it all, but this is pretty damning.

It shows that Dr. Fauci was in email contact with Peter Daszak, the man that funneled money to Shi Zhengli (China’s “batwoman”) at the Wuhan lab for research on coronaviruses, worked hard to dismiss the lab-leak theory, and was hand-picked by the World Health Organization to be part of the investigation into the origin of the coronavirus. The Wall Street Journal reported in August 2020 that Daszak gave $3.4 million in US taxpayer funding to the Wuhan Institute of Virology in order for them to study bat coronaviruses.

Peter Daszak, a zoologist whose non-profit steered U.S. funding to the Wuhan Institute of Virology, thanked Dr. Anthony Fauci for pushing back on the theory that the coronavirus leaked from a lab, in an April 2020 email published as part of a FOIA request by Buzzfeed.

Daszak’s organization, the EcoHealth Alliance, funneled $3.4 million in grants from the National Institutes of Health to the WIV to study bat coronaviruses between 2014 and 2019. While politicians and scientists in the U.S. have suggested that the novel coronavirus initially leaked from the WIV before spreading across the globe, Daszak has vehemently denied the allegation.
Source: National Review

On April 18, 2020, Daszak wrote to Fauci, “I just wanted to say a personal thank you on behalf of our staff and collaborators, for publicly standing up and stating that the scientific evidence supports a natural origin for COVID-19 from a bat-to-human spillover, not a lab release from the Wuhan Institute of Virology,” adding, “From my perspective, your comments are brave, and coming from your trusted voice, will help dispel the myths being spun around the virus’s origins.”

The next day, Dr. Fauci responded, “Many thanks for your kind note.” 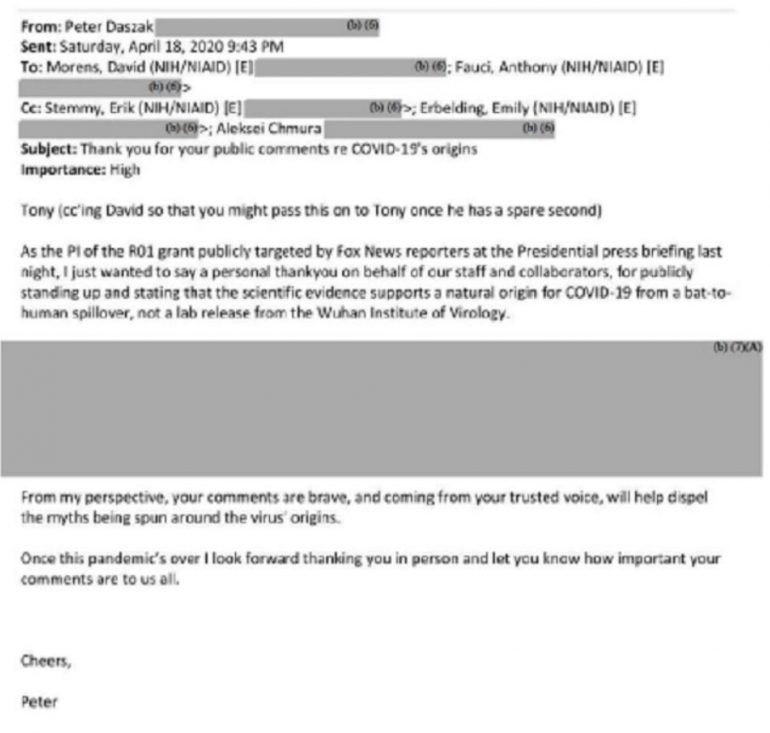 Daszak was referring to Fauci’s response to a question posed by a reporter during the April 17, 2020 White House Coronavirus Briefing.

A reporter posed the question, “Mr. President, I wanted to ask Dr. Fauci: Could you address these suggestions or concerns that this virus was somehow manmade, possibly came out of a laboratory in China?”

Business Insider reported on this exchange on April 18 with the headline, “Dr. Fauci throws cold water on conspiracy theory that coronavirus was created in a Chinese lab.”

“There was a study recently that we can make available to you, where a group of highly qualified evolutionary virologists looked at the sequences there and the sequences in bats as they evolve. And the mutations that it took to get to the point where it is now is totally consistent with a jump of a species from an animal to a human,” Fauci replied.

He underscored in his remarks that studies of the virus’ genome have strongly indicated that it was transmitted from an animal to a human rather than created or enhanced in a laboratory setting, as a review in a scientific journal found.

“We do not believe that any type of laboratory-based scenario is plausible,” an analysis published in Nature Medicine in mid-March said. The study, led by computational biologist Kristian Andersen of the Scripps Research Institute in California, compared COVID-19 to the six other coronaviruses known to infect humans. The analysis explicitly states that the evidence shows SARS-CoV-2 “is not a purposefully manipulated virus.”
Source: Business Insider

The thing is, Fauci didn’t know what the origin of the virus was, and he didn’t seem to be that curious.

In another friendly email exchange with the Director of China’s Center for Disease Control and Prevention, Dr. George Gao, Fauci didn’t bother to ask about the origin of the virus from someone who was in a position to give him some information on that front.

Meanwhile, it looks like the “conspiracy theorists” are getting a bit of vindication.

Can’t wait to see the media try to spin the Fauci FOIA emails.

And the clowns in the Corporate Media continue to beclown themselves.