With every passing day, Pelosi is a little more comfortable in the role of a tyrant. Mask mandates just provide plausible cover for her true intentions.

Pelosi must be pretty happy with herself — she blocked anyone on the Jan 6 hearings that might have asked uncomfortable questions about exactly what decisions she made in her role as final authority in Capitol Security.

With all the security failures and lack of preparation, despite numerous offical FBI and police warnings about the likely security risks, not to mention Trump’s offer of having 10,000 National Guard at the ready that was never taken up, some of the unanswered questions lead right to her.

She dodged that bullet, plus she’s keeping her party’s hard-left financiers happy by pushing the country hard to the left. And she’s got hundreds of ‘mostly peaceful’ protesters who backed the wrong party rotting in solitary, and sometimes getting their heads kicked in by rogue prison guards despite the little detail that most of them have not yet been found guilty of any crime.

She is watching the borders swarm with foreigners and is already working toward plans for amnesty. She must feel like she can get away with pretty much anything.

She’s even slapping arbitrary fines for thousands on her rivals over ‘violations’ of not using the metal detector after visiting the washroom — despite having avoided the metal detector herself. She is accountable to literally nobody… and she knows it.

Does all of that explain the latest Capitol Police mask mandate memo, threatening elected officials with arrest? They do take their direction from Pelosi, after all.

This story has three main parts.
The memo. The reaction. The Capitol Police backpedaling.

In today’s edition of Pelosi’s abuse of power, Capitol Police have been directed to arrest staff and visitors to comply with her mask mandate for vaccinated individuals.

For Members, they advise not arresting but “reporting Members to SAA for their failure to comply.”

(It’s archived here if it gets taken down, since Dem operatives are already flagging it for Twitter management to censor it.)

John Backman interviewed her about it here, where she explained the details of it, while holding up the memo. In this interview, she mentions that the policy was based on the same discredited that we reference in another story where Ted Cruz blasted the CDC for discrediting itself by becoming invested in political narratives instead of repeatable data.

All words to describe Speaker Pelosi's most ridiculous directive to USCP. If you didn't believe her power grab could get worse, you'd be wrong. pic.twitter.com/yrJv3KvcuK

Here is a screenshot of the document itself. 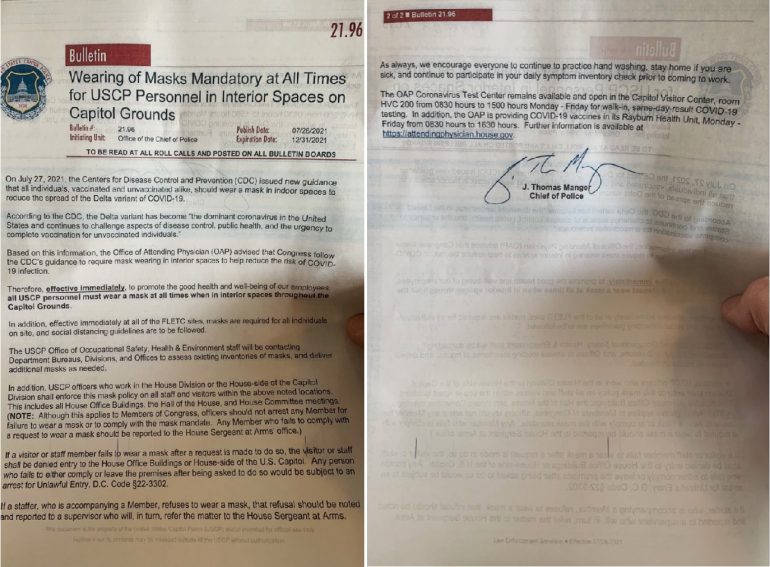 While explicitly stating that noncompliance will be denied entry or met with arrest (for ‘unlawful entry’) and removal for ordinary citizens, violations of noncompliance by elected officials will be handled by reporting offenders directly to the Sergeant-At-Arms.

Here are some typical reactions that she retweeted: 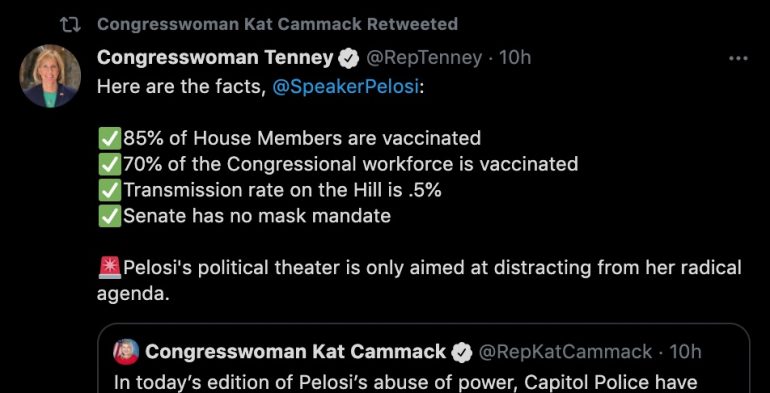 That firestorm prompted an official reply from the Capitol Police in which their tone was very much softened from their first memo.

“Regarding the House mask rule, there is no reason it should ever come to someone being arrested. Anyone who does not follow the rule will be asked to wear a mask or leave the premises. The Department’s requirement for officers to wear masks is for their health and safety. — The United States Capitol Police.

We can’t help but notice how it is silent about what it will do to people who do not comply. One could expect they will not suffer the same fate as Ashli Babbitt, but it’s not as though the person who made that call ever had to answer to the public — or the grieving family — for that decision, did he?

We found an answer to what happens to any noncompliant Republicans — because we’ve already seen how Democrats never have to pay the fine, even when breaking the same rule that costs Republicans thousands of dollars — reported to the Sergeant-At-Arms.

Members of Congress and aides accompanying them who break the new rule won’t be arrested, but will be reported to House leaders, who will dock their pay with $500 fines. The Constitution says members of Congress are “privileged from Arrest” in most cases at the Capitol. — NYPost

We saw this at the Free Beacon… 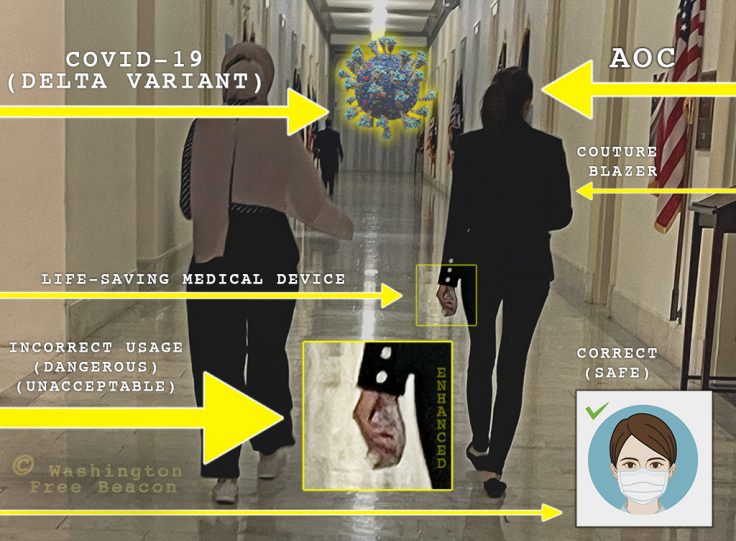 … will AOC be facing a fine?