Evidence is mounting that Raffensberger certified an election result that was — at best — resting on a shaky foundation. So like any other political weasel, he’s calling for someone ELSE to pay the price.

If there were a shred of honor among the political establishment class, there would be mass resignations and public apologies for having been so woefully derelict in their duties.

But it has taken one smoking gun after another to raise even the glimmer of a possibility that any wrongdoing had happened whatsoever.

The latest instance was Tucker Carlson showing several examples of side-by-side images of identical ballots that were counted more than once, together with video of a poll worker appearing to run the same batch of ballots more than once to be counted.

Another instance of what can only be described as obvious criminal fraud that was mentioned in the same program — fraud that somehow escaped detection during the ‘recount’ process — was when batches that had ballots putting support behind three different parties mysteriously showed up in the tally as having unanimously voted for one Joe Biden.

When you couple examples like these to stories like the one Margot Cleveland unearthed about a flood of out-of-state voters who unlawfully participated in the election, the dots in the picture look less and less like individual outliers, and increasingly like a ‘fact pattern’.  HEY GEORGIA: Looks Like You ‘Missed’ Something In Those Election Audits … Care To Explain?

FULTON COUNTY, GA: ??? More evidence from @VoterGa shows audit tally sheets were marked entirely for @JoeBiden despite having votes for Donald Trump and Jo Jorgensen in those batches. Must watch! @RealAmVoice pic.twitter.com/RPOBsCON7Q

Have you asked yourself why President Trump would have been so worked up about these irregularities? Simple. Imagine yourself in his shoes. Imagine seeing all indicators, all bellwethers, where all data points to your victory, only to watch some very suspicious events unfold in the exact places where the win you were anticipating was suddenly reversed against you. Wouldn’t you want answers? Sure you would.

He saw, like the rest of us did, that the exact critical battleground states where his win hung in the balance just happened to be the same places that ran into a series of strange issues of running late into the night, of having Republican leads narrow and then disappear late in the night. Of seeing sudden big swings in numbers — and in some cases even seeing sudden swings where Trump’s numbers dropped by the same number that Joe’s rose.

The courts offered him no recourse. There was always some reason or another that they refused to even consider the evidence. Bill Barr — perhaps cowed by threats of his own possible impeachment — offered no recourse. If one Pennsylvania AG’s letter can be taken at face value, Barr refused to look at known evidence of voter fraud.

Remember, still fresh in our minds at this point is the fact that we never did get any satisfaction (or straight answers) over known incidents of actual abuse of power — caught red-handed — against Trump’s administration by the very people who are supposedly public servants. That rationale was detailed in-depth here: MUST-READ: Epic Twitter Thread Gives Perfect Primer On Why MAGA Doubts 2020 Election Results

“Trump did not tell the investigator to ‘find the fraud’ or say she would be ‘a national hero’ if she did so. Instead, Trump urged the investigator to scrutinize ballots in Fulton County, Ga., asserting she would find ‘dishonesty’ there. He also told her that she had ‘the most important job in the country right now.’”

“The headline and text of this story have been corrected to remove quotes misattributed to Trump,” it added.– NewYorkPost

The WaPo correction came ‘a day late and a dollar short’… long after the damage was done. Then again, that line of argument could just as easily be leveled against the role of Raffensberger himself.

Is it any wonder if Republicans are pissed if we are seeing the same pattern with respect to locating election irregularities LONG after the results had been (perhaps wrongfully) certified?

Does anyone ELSE remember that what Hawley and Cruz were asking for was not an overthrow of the election, so much as a 10-day review of battleground states in which more than one winner had been listed as ‘certified’… or other serious irregularities had been alleged, so that we could know whether the Electoral College or the Constitutionally-provided ‘plan b’ would be used to determine who had prevailed in the 2020 Presidential election?

So now, almost nine months after the fact, we’re supposed to take him seriously when he reacts like THIS to Tucker Carlson’s latest smoking gun evidence of Raffensberger having been a miserable failure at his job?

His solution is to call for the firings of OTHER people.

That kind of scapegoating is entirely predictable, and they probably do deserve to lose their jobs.

But what about HIS job? 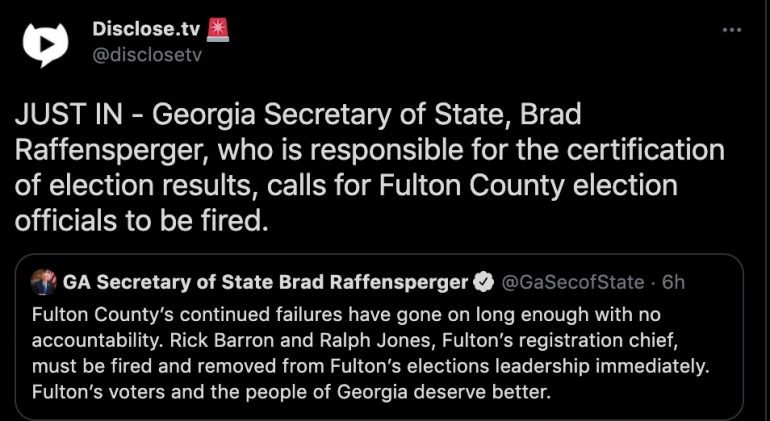