Corporate Media is broken and they don’t even realize it.

Reuters, one of the largest news agencies in the world, is no exception.

In keeping with the long history of Corporate Media siding with dictators against the people — like the New York Times did when their reporter Walter Duranty covered up Holodomor, their “Nazi correspondent” that slanted the news in favor of Hitler, and giving the Taliban inches in their Op-Ed pages after freaking out about a Republican Senator’s piece — Reuters is suggesting that anti-communist protests in Cuba might be “dangerous.”

On Wednesday, the international news organization decided to fearmonger about the “Delta variant” as Cubans take to the street protesting against communism and facing violent suppression by the regime in power.

Protests in Cuba will increase the risk of COVID-19 transmission because of an already high level of cases and the more contagious Delta variant, health officials said on Wednesday.

“The gathering of individuals for protests… increases the risk of transmission, in particular in cases such as Cuba where you have active transmission in many areas over the last week and 34,244 new cases reported,” said Dr. Ciro Ugarte, PAHO’s director of health emergencies.
Source: Reuters

Maybe it’s a stretch, but it seems like getting beaten or shot by a totalitarian communist regime is a bigger concern than a virus that the vast majority of people recover from.

Also, we were told back in 2020 that outdoor transmission of the virus isn’t really a thing during protests — even if you’re crowded together and chanting.

When they posted the article on Twitter, Reuters was lambasted. 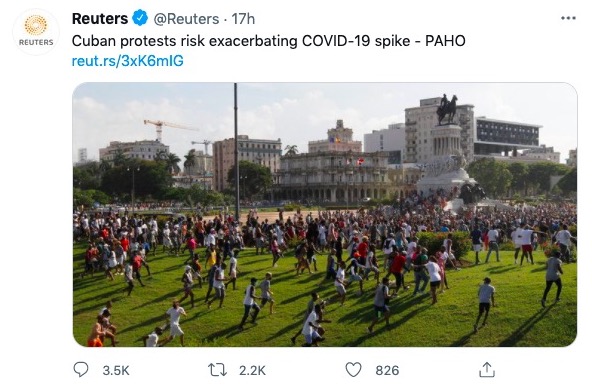 The responses were absolute gold.

The Babylon Bee, man, always so witty with this stuff.

Oh god, this is a serious headline.

“Fighting communism is the bad kind of protest we call a super-spreader, unlike other state-sanctioned protests.”

Communism is more deadly than Covid.

BLM protests were more important than Covid risk and probably couldn’t even spread it because liberation and justice matter, you and yours told us all last summer.

Anti-communist protests are super-spreader events, though?

I think their government shooting them might be a bigger risk

1 you said nothing like this during the massive ongoing riots in the summer of 2020
2 this is an actual communist dictatorship you’re running cover for here and I’m sure you know that but I want to remind your shameless “journalists”.

But this BLM rally of 50K in Hollywood at height of pandemic, with no vaccine, was totally fine. pic.twitter.com/zkjM7JOLjw

I was reasonably assured all last year that peaceful protests against authoritarianism were immune from the COVID.

The virus knew a righteous cause when it saw one and nobody there got sick. https://t.co/xC8jv6ecln

And it seems that Reuters, in particular, had some reportage that was consistent with that theory that the virus can recognize a “righteous cause” protest as pointed out by Leon Wolf, editor of The Blaze.

The thing is, we all know that all media is biased. Some, like Fox News, Newsmax, The Blaze, The Daily Wire, and here at ClashDaily, are just honest about it.

The Associated Press — who knowingly shared office space with Hamas in Gaza and then feigned ignorance about it after an Israeli airstrike hit the building — as well as Reuters, the New York Times, the Washington Post, CNN, and the Big Three legacy media outlets, ABC, CBS, and NBC, all claim to be “neutral” when they are clearly not neutral.

At least Americans are recognizing that now. A new international poll — ironically conducted by the news organization’s namesake Reuters Institute for the Study of Journalism, a research center at the University of Oxford — shows that the U.S. ranked lowest in 46 countries studied for trust in media. Only 29% of Americans polled say that they trust the news.

The latest Reuters Institute’s Digital report said that most people around the world believe that “news outlets should reflect a range of views and try to be neutral” and that those who felt that the media has been unfair were those “with a right-leaning political outlook.”

Despite this, Corporate Media seems to have doubled down on partisanship in their coverage of pretty well everything. This clearly isn’t about making money — they’re alienating half of the country and annoying independents who don’t want to be told what to think.

Corporate Media does this because they believe that they’re right and the rest of us just need to be as enlightened as they are. After all, all of their Corporate Media buddies agree with them. They live in a bubble and don’t know it. It’s moments like the overwhelmingly negative responses to Reuters’ stupid tweet that will pop that bubble.