Politically powerful Dems have a habit of getting a free ride from the press where sexual malfeasance is only mentioned after the fact.

Democrat media love to trot out a scandal — real or imagined — when it can hurt the Republican brand. They salivated over the Kavanaugh hearings, convinced that every allegation must be believed… even though some of them were proven to have been entirely fabricated, and other allegations had more holes than a Wiffle ball.

In Presidential races, they derailed a very promising black candidate for President, dragging his name through the mud with allegations of sexual infidelity, while the entire press corps turned a blind eye to Democrat John Edwards knocking up his mistress during a campaign and use campaign money to buy her silence while his wife was suffering with cancer.

But Bill Clinton? It was not until AFTER Hillary had run out of political capital that reporters started admitting they should have believed Juanita Broaddrick’s rape allegation. What happened to the guy who helped stomp out those ‘bimbo eruptions’ by discrediting the accusers? George Stephanopoulos became the face of ABC. Ed Buck? It took a second black man dead of an overdose to take him down — and the testimony of a third victim who was fortunate enough to not die.

Harvey Weinstein? His behavior was the worst-kept secret in Hollywood for years, stories were suppressed in newsrooms, until they wern’t. He routinely hobnobbed with all the right people, and pushed a lot of money into the Democrat cause. Whoopi Goldberg tried to excuse Roman Polanski for drugging and sodomizing a child by saying ‘it was not rape-rape’.

Governor Cuomo was just the latest in a long line of New York politicians who have disgraced themselves for sexual impropriety — which the Democrats would find an easier pill to swallow than the real reasons he should be impeached, for ordering the nursing home policy that killed people, and ordering his staff to obstruct justice in a cover-up.

This takes us right back to another one of the stories that battleground state Biden voters admitted would have changed their vote had the news bothered to report it. The damning allegations being made by his own former staffer Tara Reade.

This was not coming from someone cheering for a victory by team MAGA. She’s a lifelong Democrat faced with the realization that a man she alleges to have both abused her trust and violated her body could be on the verge of taking the most powerful job in the country. As yourself, how would YOU feel about seeing someone who had molested you on the nightly news, and living at 1600 Pennsylvania? Would that be enough to make YOU break your silence?

“My heart is with the brave Cuomo survivors who endured attempts to discredit them like I did coming forward about Joe Biden with the help of non-profits that were supposed to help women like Time’s Up,” Reade told Fox News. “May there be some measure of justice for the survivors. Now, let’s call for a real investigation into Joe Biden and expose the corruption protecting powerful predators.””

Reade torched Time’s Up, the organization that purportedly was meant to assist women who were subjected to sexual harassment and assault. However, it was swept up in the Cuomo scandal after revelations that co-chair Roberta Kaplan assisted Cuomo in discrediting one of his accusers.

…”Time’s Up committed the most hideous betrayal to protect their most powerful friends and not only not protect survivors but cause harm,” Reade said.

…”The revelations and Cuomo’s resignation is a signal to the powerful men with nasty behavior that survivors’ voices will be heard and their behavior no longer rewarded. Not from a governor and not from the president of the United States,” Reade said.

She added, “I hope for justice. Cuomo resigned today and Biden should also resign.” — FoxNews

Joe can assert that the case was ‘litigated’ all he wants. But his accuser is not going away.

And there are threads of corroborating evidence that need answering — for example, this testimony of her ex-husband from court records published here. 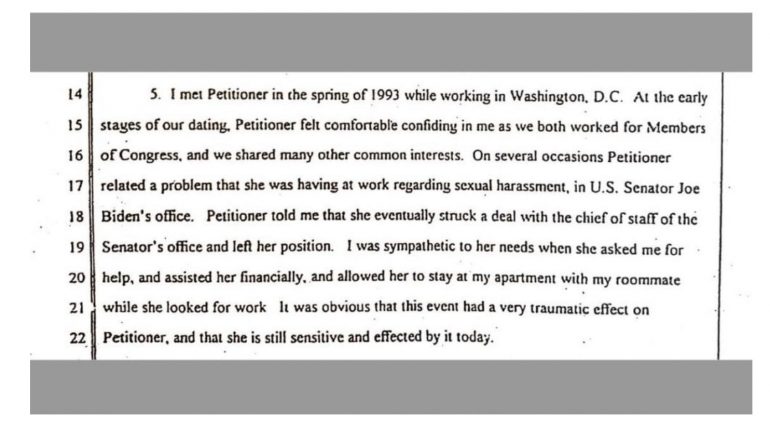 Who ‘deserves justice’ in Joe’s supposedly more righteous administration? Is it just the accusors of ‘disposable’ people like MAGA supporters and Democrats whose disgrace threatens to bring down the whole party with them?

Or do meaningful investigations into criminal allegations, like the one Tara Reade not to mention a certain Apple laptop repairman have been calling for, get ‘justice’ as well?

We suspect we know the answer to that question already, Joe — but feel free to shock us all with a surprising display of transparency and integrity. That would come as a refreshing change from the lies and stonewalling we’ve seen from this administration over these first six months.