Since this headline is NOT the top story in all the big papers, you can probably guess his party affiliation even without our stating it.

Sen. Otoniel “Tony” Navarrete is hardly a household name for anything he has accomplished in public life. But that’s not the only way a politician can become famous, is it?

Navarrete just found himself stumbling into another one.

There is an old line in politics about being caught in bed with a live man or a dead woman. That’s not quite what happened in this case… but it’s in the ballpark.

Have you guessed his party affiliation yet? If not, his photo op might help clarify things for you…

AOC with the AZ State Senator who was just arrested for child molestation: pic.twitter.com/KkGdEmjqaV

Democratic State Sen. Otoniel “Tony” Navarrete was arrested Thursday night on charges of sexual conduct with a minor, a police source with knowledge of the case told 12 News.

Booking information from the Phoenix Police Department released on Friday confirmed Navarrete faces three counts of sexual conduct with a minor and one count of molestation of a minor.

While reports circulated in the political community that Navarrete had been arrested, Phoenix police released this statement late Thursday:

“The Phoenix Police Department received a report of sexual conduct with a minor that occurred in 2019. Detectives interviewed a juvenile victim and witnesses, and on August 5th, developed probable cause to arrest the suspect. The suspect was arrested and is currently in the process of being booked into jail for multiple counts of sexual conduct with a minor, among other charges.” —12News

Here is the mission statement of a group called ‘Stand For Children’, as taken from their website:

Stand is focused on ensuring all students receive a high quality, relevant education, especially those whose boundless potential is overlooked and under-tapped because of their skin color, zip code, first language, or disability.

Having someone you endorsed facing child sex charges would be a pretty bad look for a group claiming to represent the interests of children, right? 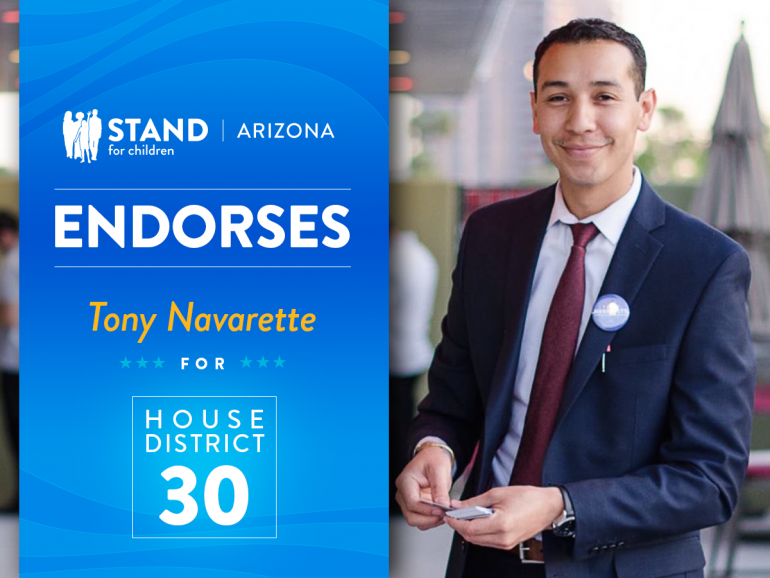 Maybe that group’s endorsements aren’t all they’re cracked up to be.

the official response of the Democrats was an acknowledgment that the arrest had been made, with no further comment at the time.

Adding insult to injury for the Democrats, the 35-year-old who was elected to represent District 30 in West Phoenix in 2016 was reportedly isolating at home while dealing with symptoms of COVID just days ago, despite having been vaccinated.

It’s not as if this is a case of a high school senior with his younger girlfriend. This guy, now 35, would be only a couple of years younger at the time these allegations were said to have happened. The age (and gender) of the alleged victim are not public.

Let’s see if these criminal charges get the same kind of national attention that the story about Roy Moore generated, shall we?