Is THIS what “student leadership” on American college campuses looks like these days?

Early on Saturday morning, Nathaniel Hope, a member of the Washington University College Republicans filmed a student removing miniature flags as part of a campus 9/11 memorial and putting them in garbage bags.

Washington University is a participant in Young America’s Foundation (YAF)’s 9/11: Never Forget Project. As part of the memorial, 2,977 miniature American Flags are planted in the ground to represent each of the innocent victims of 9/11.

But it turns out that it wasn’t just a random student that was removing the flags from a memorial on the 20th anniversary of 9/11 — he was a student senator.

According to the Daily Mail, Fadel Alkilani, who was spotted removing the flags, serves as chairman of the student senate finance committee at the St Louis, Missouri university.

Hope approached Alkilani who had several bags filled with the flags.

Hope described Alkilani as showing ‘no remorse’ before claiming the flags were a ‘violation of school rules.’

‘I did not violate any university or legal policy. Now go away,’ Alkilani told YAF.

Meanwhile, Alkilani allegedly boasted about the act on his Twitter, which has since been set to private.

He claimed the move was done in ‘protest against American imperialism and the 900,000 lives lost as a result of post 9/11 war.’ 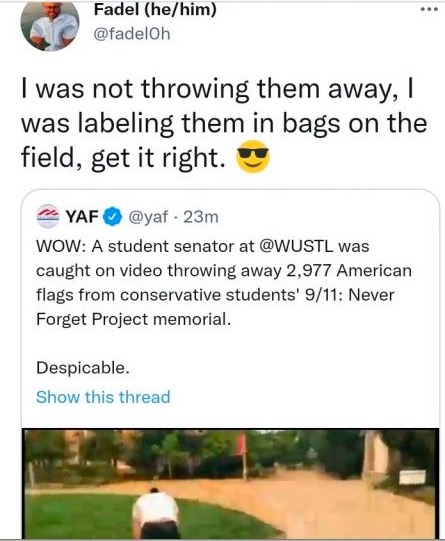 Students say that he tried to destroy the memorial on Friday night but was stopped by campus police.

Alkilani posted a lengthy statement claiming that he was the victim of a “harassment campaign” by the Washington U College Republicans and YAF.

On Instagram, he bemoaned the widespread condemnation he had received online as the story circulated on social media.

In a statement posted on social media, Alkilani said that ‘there is currently a massive harassment campaign propagated primarily by Washington University College Republicans, as well as the national Young American’s Foundation (YAF)’ regarding an incident that occurred around 6am on Saturday, September 11, 2021.’

‘There is a large amount of misinformation circulating,’ he said before denying he was stealing flags from the campus.
Source: Daily Mail 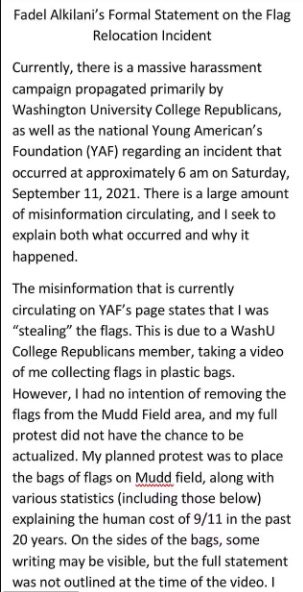 In the statement, he mentioned “Islamophobic hate crimes”, “900,000 people killed because of the wars the United States has propagated”, as well as “37 million people have been displaced.” He goes on to say that any memorial “that does not contend with these facts is…incomplete” and “amplifies pro-imperialist sentiment and actively disrespects those who have died because of American invasion.” He added, “[a] memorial which uses US flags is especially insidious, as it does not recognize those who have fallen, but uses a symbol that ws on the shoulders of those who are responsible for the deats of 900,000 people and uses the innocent lives lost during 9/11 as a political prop upholding American hegemony.”

Alkilani wasn’t old enough to remember 9/11, and he doesn’t understand how the flag was the symbol that united everyone after watching the horror of the planes crashing, the buildings collapsing, the attack on the Pentagon, and knowing the sacrifice of Todd Beamer and the rest of the United 93 heroes in that Shanksville field.

This isn’t the time or the place to address every grievance that this guy has about the United States and “imperialism” or whatever. The 9/11 attack was perpetrated by a particular branch of Islamic jihadists who were upset that the United States continued to be allied with Israel instead of letting the only functioning democracy in the Middle East — and the indigenous homeland of the Jewish people — be taken over by Islamists who claim the land is actually theirs. Maybe bringing up “imperialism” isn’t the best move because that’s precisely what Al Qaeda, the Taliban, ISIS, and other radical Islamists aspire to.

Alkilani then spoke addressed those who were concerned about his “safety” in the aftermath of his actions. See, because the guy who wants us to include the “context” of “American imperialism” instead of just remembering the number of lives lost because of the sick, twisted plan of an Islamofascist who thinks it’s okay to kill innocent civilians because he knew he could never take on the U.S. military back in 2001, might be targeted by the right-wingers. 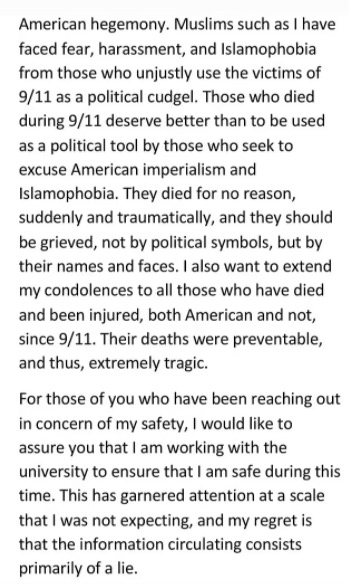 Let me guess, Alkilani is a product of the American public school system, right?

It wouldn’t surprise me. This is what it produces.

The University issued a statement saying they “condemen the interference” with the memorial, and that the school values “freedom of expression” but there was no mention of any consequences that Alkilani might face.

UPDATE: A statement provided to YAF by @WUSTL says the school “condemns” the actions of the student, but makes no mention of any repercussions against the vandal. pic.twitter.com/Zfti0YYXVM

This guy tore down a memorial in order to use the flags as part of his own protest. That’s stealing the flags, whatever he might claim that it was. He was free to create a counter-protest condemning the memorial if he wished, but he didn’t do that. It would have been in poor taste, and he probably knew he would have been lambasted for it.

Let’s be real for a second… we all know what happened here. He didn’t like the memorial. He especially didn’t like that it was using flags, he took them down, and he got caught. He then tried to make it sound like he had a righteous reason for doing it. He didn’t. Now he’s is getting heat online and doesn’t like it, so he’s playing the victim.

My advice to Alkilani — just take the “L”, dude. Apologize. Stop being an a-hole.