Gun guru, Delta Force veteran, and Bronze Star recipient had truckloads of guns taken by the Bureau of Alcohol, Tobacco, Firearms, and Explosives (ATF), including irreplaceable historical weapons he had cataloged in his collector’s guides.

Larry Vickers is a Delta Force Veteran, host of the popular Vickers Tactical YouTube channel and website, and an absolute legend in the gun industry because of his knowledge of firearms. He has created thorough firearms reference books that are known simply as “Vickers Guides.”

Vickers spent 20 years in the US Army’s special operations Delta Force unit, participated in Operation Desert Storm and Operation Acid Gambit, where he received the Bronze Star Medal for valor. After retiring, he trained numerous special ops forces, many of whom have been involved in major military operations in the past 20 years.

Here he is talking about his military career:

Vickers hasn’t issued a statement on why the ATF raided and confiscated a huge number of firearms and there’s still some confusion about what exactly caused the ATF to act.

Initial reports indicate that Vickers had not paid the annual Special Occupational Tax (SOT) required by every firearms importer, manufacturer, and dealer, which opened the door for confiscation through the National Firearms Act.

It’s unclear if the failure to pay the SOT was an oversight or intentional.

Popular Military notes that Vickers, 58, was diagnosed with cancer in 2021 and had been transferring many of his firearms prior to the confiscation by the ATF.

Many of the guns are irreplaceable historical firearms that Vickers personally documented for his collector’s guides. While many of the guns appear to be NFA-regulated, the list includes many that may not be which raises questions about what’s going on.

Multiple sources are saying that this is the result of Vickers letting his Special Occupational Tax payment lapse, which would explain why the ATF confiscated the NFA-regulated guns.

However, among the many, many machineguns, there are a few rifles and receivers, which may or may not be NFA-regulated, which raises additional questions. So far, Vickers has not given a statement about the seizures.

Vickers has been quietly fighting cancer and recently transferred and sold a portion of his gun collection. Many of the guns the ATF confiscated are valued at $1,000, which doesn’t reflect their true value.

Some of the guns on the list are essentially priceless museum pieces, historically relevant and impossible to replace. The raid happened in Huntersville, North Carolina, with the notification posted last week.
Source: Guns America Digest

You can see a sample of the sort of guns that Vickers had in his collection with these that were put up for auction last year:

In documents posted by the ATF, pages and pages of Vickers’ guns were listed as confiscated: 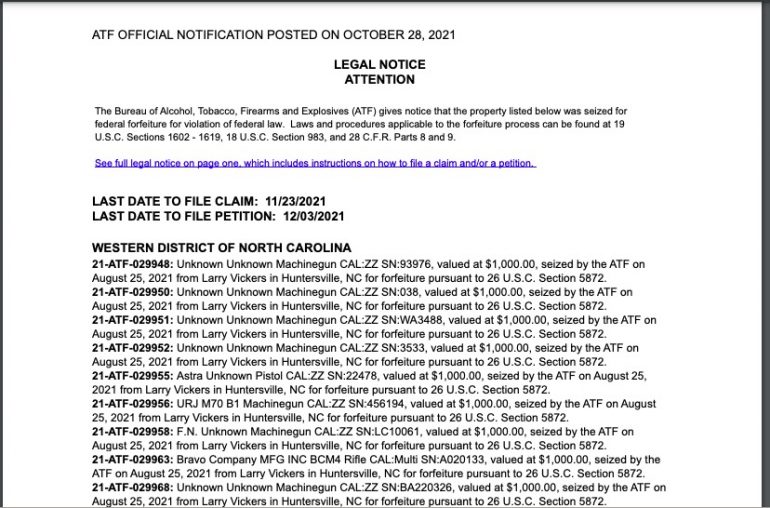 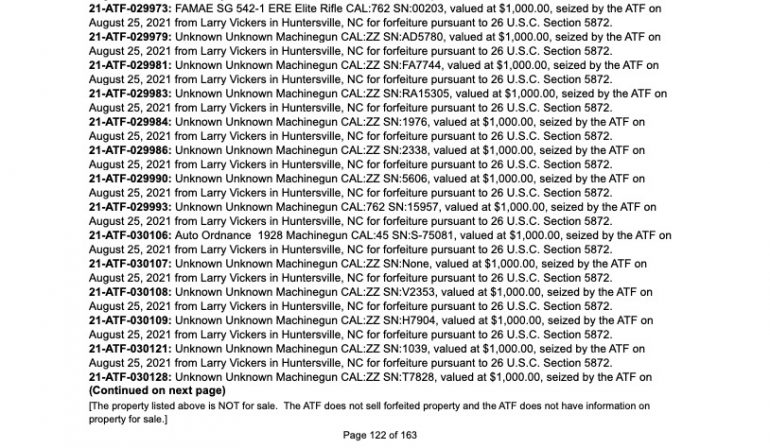 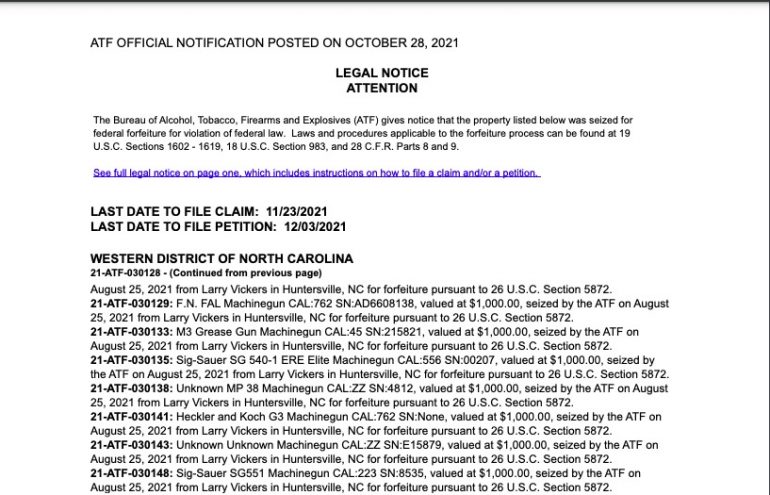 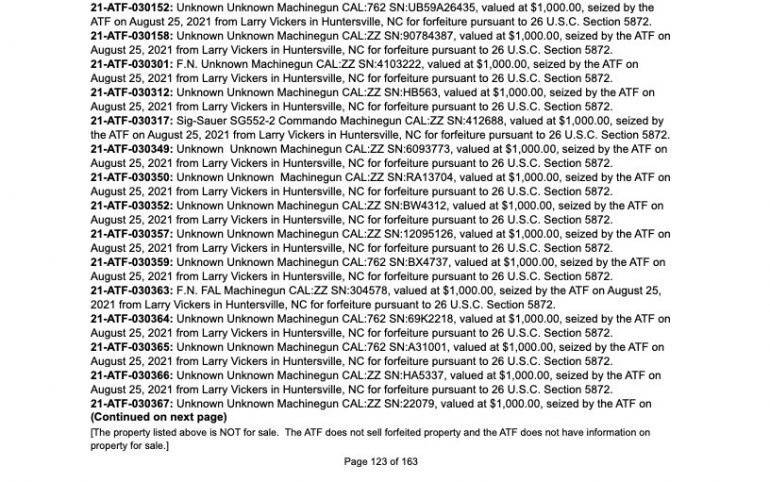 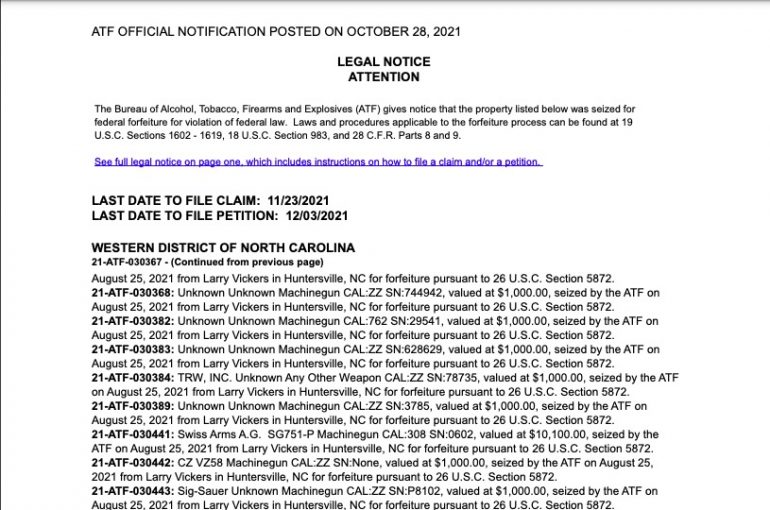 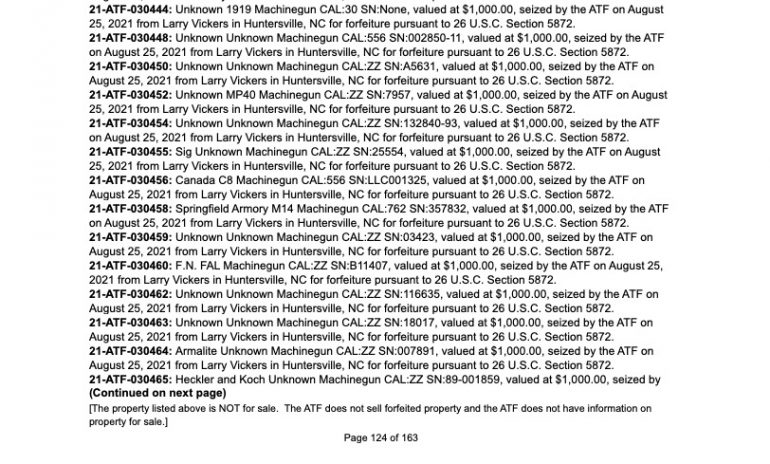 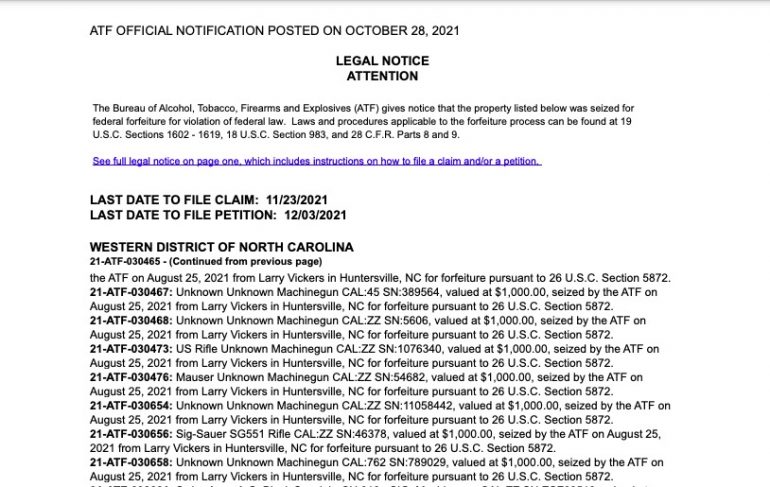 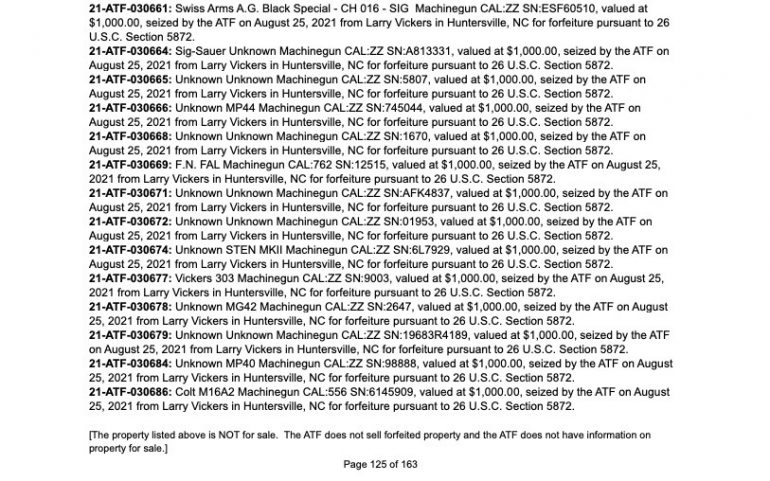 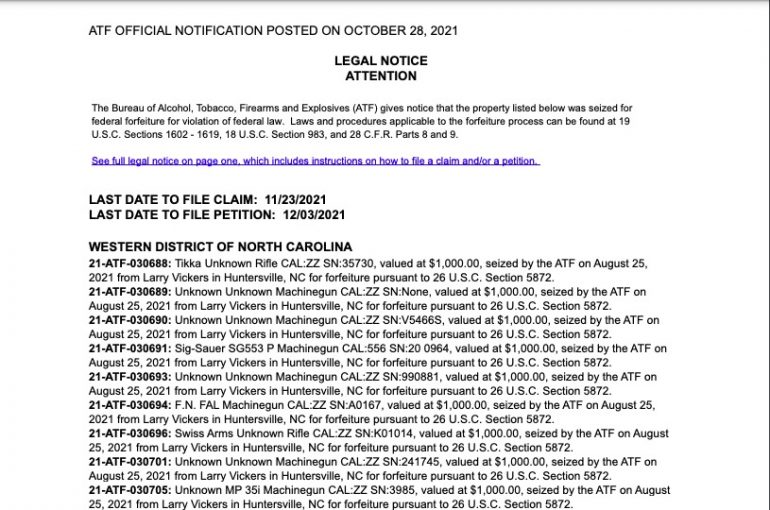 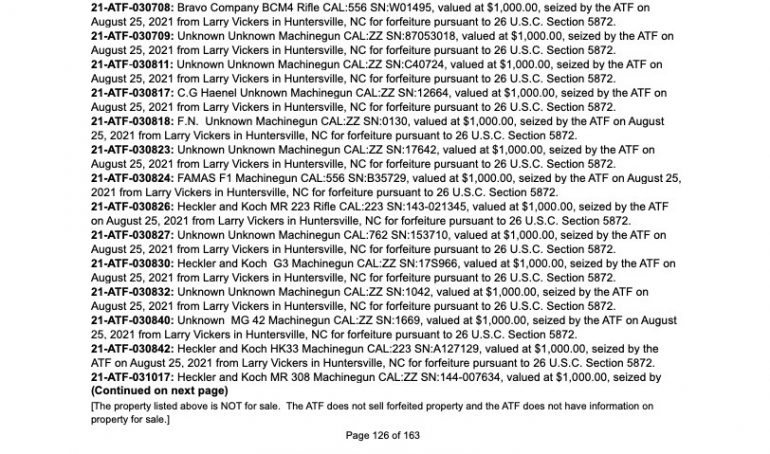 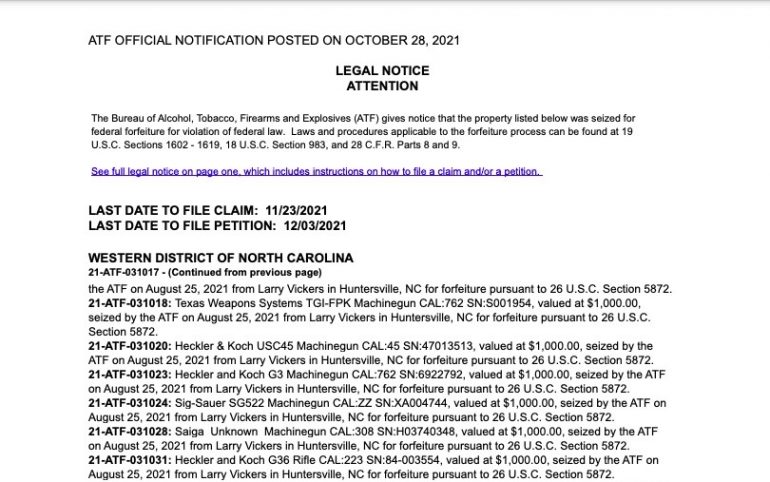 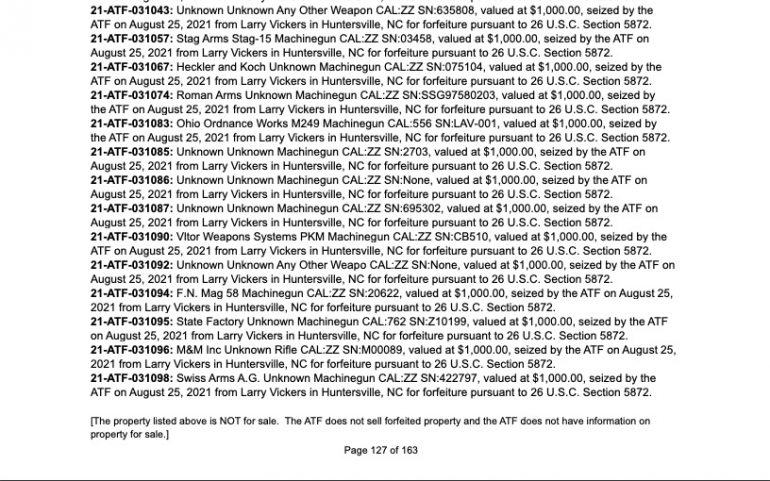 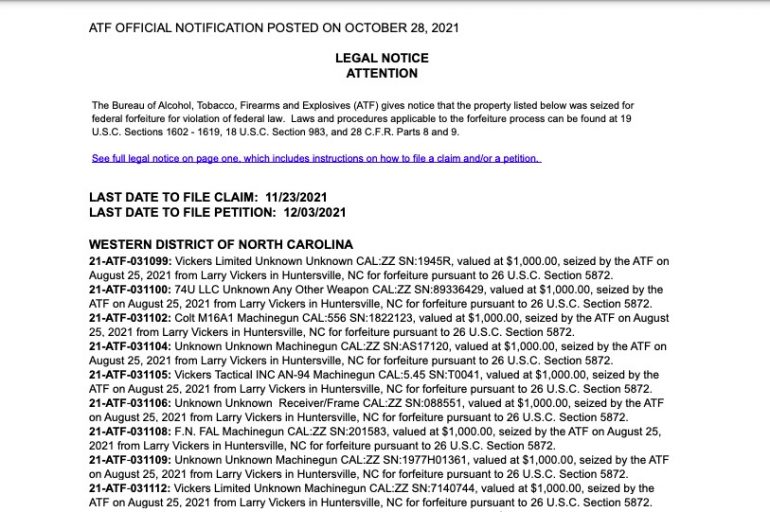 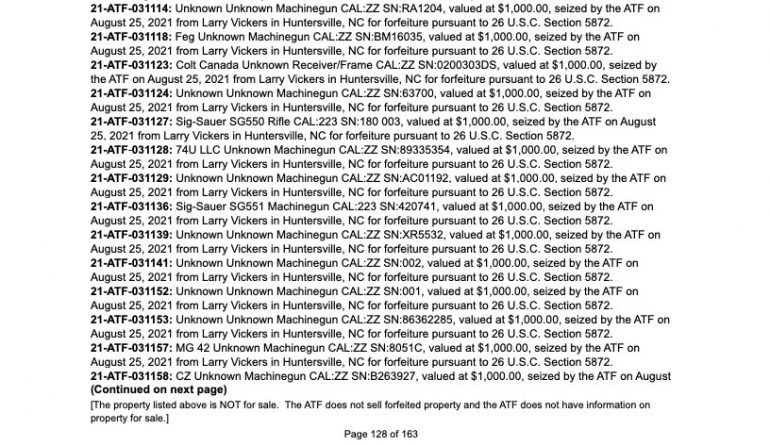 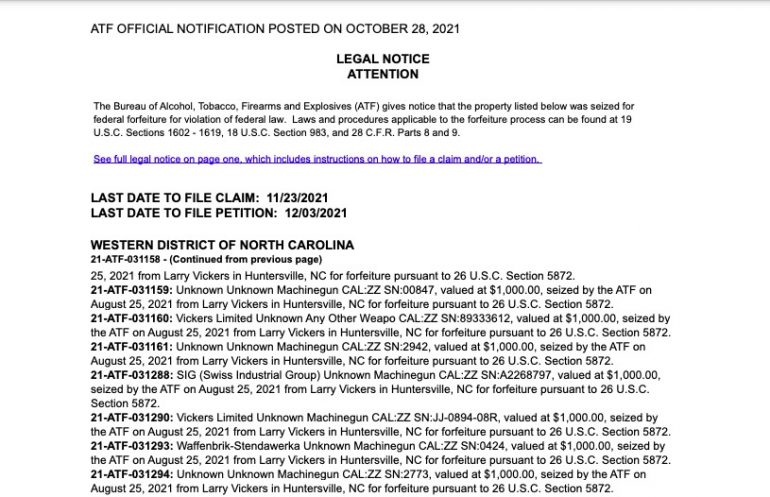 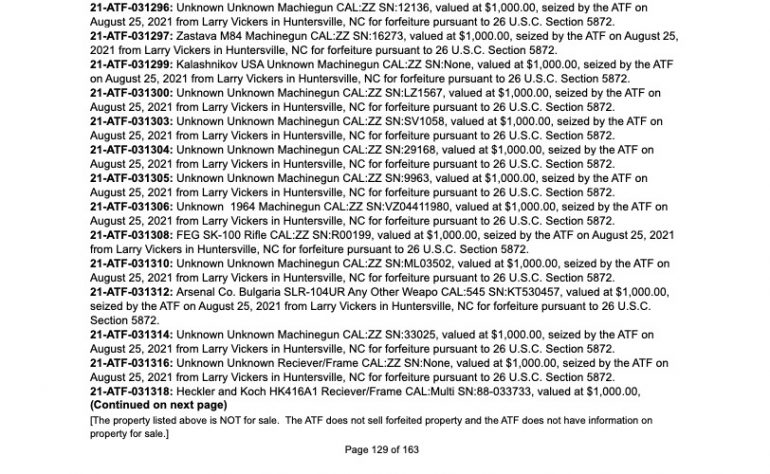 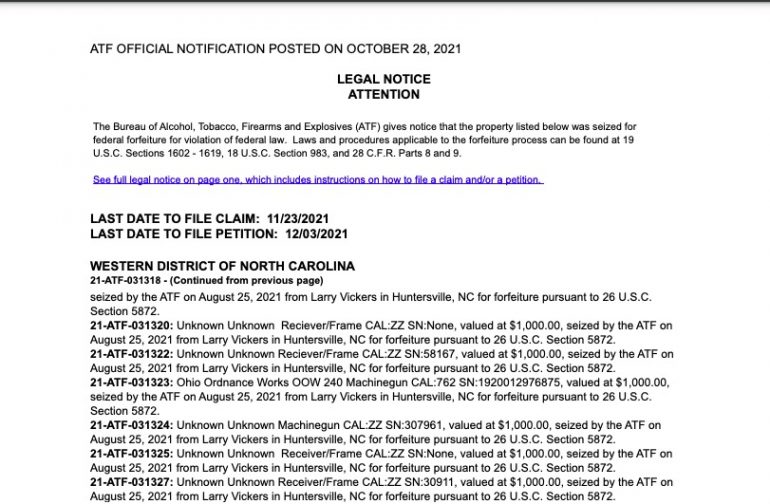 This is your friendly reminder that the gun grabbers hate you and will look for any opportunity to take your guns away.

Look at what they took from a Delta Force vet who is currently undergoing chemo.

There’s only one response to that… “Let’s Go Brandon!”