The left constantly says that there is rampant racism on the right, but so often when they point to an incident, it’s fake.

Clearly, the left has learned absolutely nothing from the Jussie Smollett incident.

The 2017 “unite the right” rally in Charlottesville has been one of the things that Democrat gubernatorial candidate Terry McAuliffe has been bringing up in his campaign almost as often as he says “Trump”. It’s been a divisive, fearmongering campaign, which is standard fare for Democrats.

So it seemed a bit suspicious to Republicans when at a rally stop in Charlottesville, a small band of people with Tiki torches showed up in front of Glenn Youngkin’s bus and shouted how they were “with Glenn.”

Here’s the error-ridden report that was quickly posted by a local NBC affiliate:

Youngkin made a stop at Guadalajara’s East Main Street location early Friday, October 29. While he was inside, several people stood with Tiki torches next to Youngkin’s campaign bus outside the restaurant.

Tiki torches were used by many white supremist who marched on UVA Grounds August 11, 2017, the day before the Untie the Right rally in Charlottesville. Jason Kessler, who is listed as an organizer of the rally in federal lawsuit, carried a Tiki torch while participating in that march.

Richard Spencer, who is also named in the same federal lawsuit, had taken part in a separate Tiki torch-lit rally for the statue of Confederate General Robert E. Lee in Charlottesville earlier that year.

Asked about Friday’s incident, Youngkin said, “I think they work for Terry McAuliffe, and I’m sure he sent them.”
Source: NBC 29

Andrew Whitley, the Executive Director of Virginia Democrats was shocked, — shocked, I say! — that anyone could suggest such a thing. 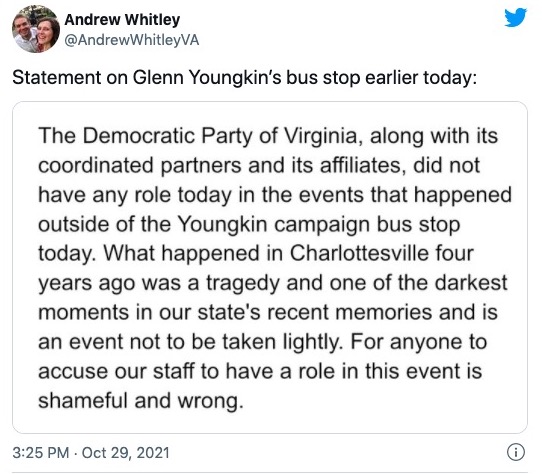 Maybe hold off on the pearl-clutching, Andy.

These men approached @GlennYoungkin’s bus as it pulled up saying what sounded like, “We’re all in for Glenn.” Here they are standing in front of the bus as his campaign event at Guadalajara started.@NBC29 pic.twitter.com/l681ejyBjc

From the very beginning, something looked… off with the painful reminder of the alt-right rally in 2017.

Closer look at these people, who are they?

Right-wingers immediately thought this looked like a false flag/fake hate attempt by the desperate Democrats in VA.

Maybe it was the hats, sunglasses, uniform of a white dress shirt and khakis… or maybe it’s the black guy.

Operatives affiliated with Young VA Democrats and some that appear to be staffers for Terry McAuliffe were quickly outed as the Tiki torch-carrying “white supremacists.”

Maybe they’re getting desperate in the waning days of the campaign now that Youngkin has taken a seismic 8-point lead over McAuliffe in a recent Fox poll.

The way you know this is a Democrat operation is that, for the role of "white supremacist" they still felt compelled to hire a black man and a woman. https://t.co/pQKnWtasy3

Alec Sears who has bylines in the Independent, Daily Caller, and the Washington Examiner figured this out quickly and posted his receipts:

This is so clearly a political operation organized by @AdamParkhomenko it's not even funny.

And I have the receipts.

Let's take a look at this gentleman. He bears a strong resemblance to one Camden Layton, otherwise known as the finance director for @vayd.

Coincidence? I report, you decide. pic.twitter.com/CAlX25hPEX

We have a good idea of who some of the other individuals are, and are working to confirm, but if you have any information do share ?

But he wasn’t the only one recognizing people. This random Twitter user recognized a woman who was spotted driving Terry McAuliffe’s van in the small, pathetic group of alleged neo-Nazis.

Right-wing Twitter is having an absolute field day with this.

Senator Tom Cotton (R-AK) Tweet-smacked around Terry McAuliffe and it was fantastic.

Terry McAuliffe is so desperate that his staffers are dressing up like Ralph Northam.

no no this wasn’t planned or anything ? pic.twitter.com/7xCNOpTg51

BREAKING: Financial director for Young VA Dems has gone private after being exposed for posing as a white supremacist pic.twitter.com/fbCbafIiZf

BREAKING: Colleen Wachenfeld’s Twitter account no longer exists after being exposed for posing as a neo-Nazi pic.twitter.com/8waTG5JYr8

Wait — Twitter hasn't banned the McAuliffe campaign for pretending these people are Glenn supporters? Imagine if Glenn had sent fake Antifa to a Terry rally.

The McAuliffe campaign has spent the entire election cycle talking about the seriousness of what happened in Charlottesville in 2017.

Now they're sending staff to recreate to at campaign events.

That's quite the mixed message. https://t.co/9pzunJGs9h

This is how you know David Shor is right about Dem operatives and activists being insanely out of touch. They can't even do despicable stunts like normal people. https://t.co/GybVyhEBBk

The meeting of Virginia Democrats who dress up as racists in their off-hours is getting crowded.

Democrats just can’t help it. They must vilify all Republicans as racist — even if they’re the most anodyne moderates who think kids should be educated instead of indoctrinated.