AG Garland kicked a hornets’ nest when he issued the now-infamous memo suggesting that concerned parents would be treated as domestic terrorists.

The memo was issued primarily in response to a letter that was sent, and later retracted, by the National School Board Association.

MIKE LEE: I urge and implore Attorney General Garland to rescind the October 4th memo. This memo by the National School Board Association was issued on a Wednesday. The Attorney General Garland memo was issued the following Monday, just four or five days after the original memo, which has now been rescinded. It’s not backed up by a scintilla of evidence of a single threat of violence. It needs to be rescinded, and I call upon the attorney general to do precisely that. —FoxNews

Muddying the waters of his objectivity even further is evidence that White House operatives were involved in penning the letter sent by the NSBA.

Emails obtained through public records requests by Parents Defending Education and provided to The Washington Free Beacon have led to questions about the Biden administration’s involvement with the contents of the letter, and its motives for actions taken afterward.

While the original letter did acknowledge “recent discussions with White House and U.S. Department of Education staff on many critical issues facing public schools, including threats school officials are receiving,” the released emails revealed details showing the NSBA was in talks with the White House before the letter was released. — DailyWire

And then, it came out that Garland’s own son-in-law is involved in providing Critical Race Theory educational materials, and stands to be financially impacted by decisions made about whether or not those services are used.

Ted Cruz raised this issue, and the potential ethics violations involved, at a hearing this week.

Ted Cruz: “If Critical Race Theory is taught in more schools does your son-in-law make more money, yes or no?”

AG Garland: “This memorandum has nothing to do with Critical Race Theory or…”

Ted Cruz: “Will you answer if you sought an ethics opinion?” pic.twitter.com/gPvv7qprvq

As you can see, Garland took great pains to NOT answer that question with the ‘no’ he so obviously meant.

For context, our readers are all old enough to remember a certain AG Jeff Sessions, aren’t you? Sessions was denied the authority he needed to give oversight over an explicitly partisan witch hunt which became the Mueller Investigation into President Trump’s supposed Russian Collusion. How did they deny him that oversight authority? Sessions was bullied into recusing himself from the investigation because of an overhyped innocuous meeting with some guy from Russia. That forced recusal wasn’t done for reasons of objectivity, it was done so that partisans could do maximum damage to Trump with rogue FBI agents who knew the allegations were bogus.

But now, after all that, we are to simply take it on faith that AG Garland has no personal conflicts?

How can we expect AG Garland to be above-board in the DOJ’s investigations into Hunter Biden’s various criminal and ethics violations, many of which could implicate the sitting President, and expose both father and son to illicit foreign influence, when Garland wasn’t even willing to put his own potential conflicts of interest under the scrutiny of an arm’s length authority?

We’ve seen this movie before… 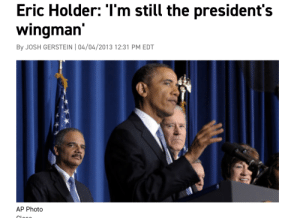 Why does this matter?

It matters because of CRT, and the DOJ being used to bully parents to accept the imposition of a leftist agenda.

It matters because China and other countries would love to have a way to manipulate, bribe, blackmail, or otherwise coerce a sitting President to cooperate with foreign priorities and interests that may be in conflict with American national interests. And the Hunter Biden stories could do exactly that.

It matters because the DOJ has been spending a massive percentage of its resources on questions pertaining to an alleged ‘insurrection’ on January 6th, when it is becoming increasingly clear that most of the people who have been arrested were charged with ‘trespassing’, while individuals who have been caught on camera urging not one but several audiences to break into the capital are nowhere to be found.

Reporters And Congress Asking: What Role Did The FEDS Play In Making Jan 6 Possible?

Naturally, when you pour all of your resources into ONE thing, they must be diverted from other priorities… HEY FEDS: Endless ‘Jan 6’ Investigations Leave A Blindspot … Bombs In Airplanes

Should the recent polling with their numbers in the toilet really surprise anyone now the American public has seen firsthand just how inept Team Biden/Harris really is?