Who could possibly think that this was a good idea? How is this not abuse?

A Colorado school is facing growing public outrage after the mom of an 11-year old posted to social media a photo of her daughter in school with blue painter’s tape holding her mask on her face. The concerned mom said that posted the photo because she wanted to know if other students at Chinook Trail Middle School in Colorado Springs “being taped” to keep their masks on their faces.

Stephanie told FOX21 News that on Friday she sent her daughter a picture from Timehop, an app that shares photos from years past, and said her daughter sent a selfie in return. In that picture, her daughter was wearing a mask with tape on it. Stephanie said that’s when she started asking questions.

“With the mask mandates and everything… she likes them because they hide her face ’cause of acne or whatnot. What really made me sad was that she didn’t see what was wrong,” Stephanie added.

Stephanie explained that her daughter was only given one warning to keep her mask over her nose, or she would need to tape it to her face. The sixth-grader told her mom teachers have been enforcing this new policy for weeks.

Stephanie shared the text messages she exchanged with her daughter asking about the tape to see if it was just kids doing it or if it was something that teachers were forcing kids to do. In the texts, her daughter wrote, “It’s a new thing, if we can’t keep our mask on our nose, we get taped!”

The district imposed a harsh mask mandate on students that took effect on September 27. 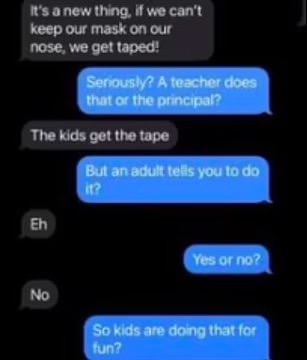 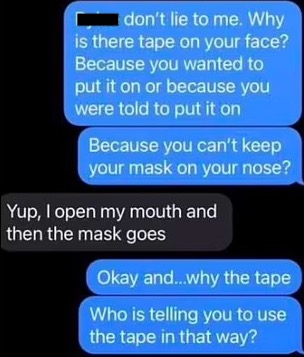 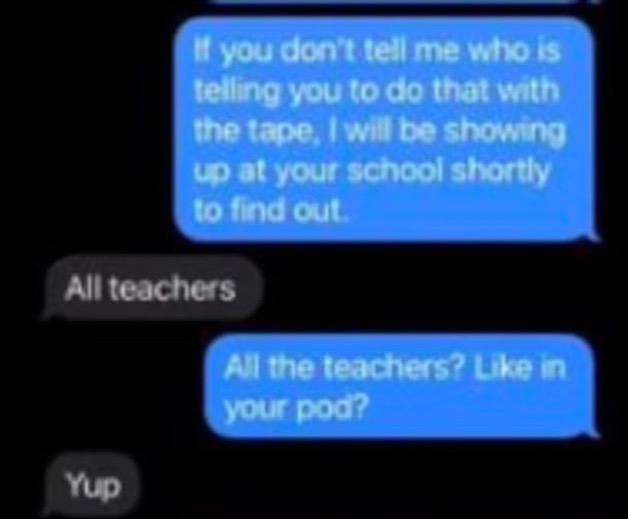 Another parent said that her daughter told her that the teachers were wearing the tape around their wrists and using it to tape down the masks on students if it slips.

“She said the teachers were wearing the masking tape around their wrists like bracelets and whenever someone’s mask would fall down, they would tape them,” Parent Tori Skeldum said. “It’s sad that our world is coming to this and teachers would think it is OK.”
Source: Fox 21 News

As disturbing as it is that teachers are forcing middle school students to wear tape on their masks because they’re so terrified of the China Virus, Stephanie Butler hits on a bigger issue — her daughter didn’t seem to realize that this was wrong.

What kind of lesson are these “educators” teaching children about bodily autonomy? The message that they’re inadvertently giving is that a person in authority has control over a minor’s body regardless of how that minor thinks or feels about it. That’s incredibly dangerous.

And what’s so disturbing is that kids are so desensitized, they don’t even know it’s wrong. In our hypersexualized, drug-fuelled culture you can just see how this could go sideways fast.

Following the media firestorm over the incident, an announcement was sent to parents, students, and teachers addressing the issue signed by Tom Gregory, Superintendent of District 20.

It said, “Since Monday, our district has been featured on the local, regional and national news related to allegations teachers were taping face masks to students’ faces.”

“These are serious allegations that have charged a great deal of emotion and judgement. We cannot and should not jump to conclusions. We take these allegations seriously and are following policy and procedures to conduct an internal investigation that includes well over 100 initial and follow-up interviews. We must trust the process and respect all parties involved,” it continued.

“We ask for your patience and grace so we may fully understand what happened. Once the district is confident that all facts surrounding the allegation are known, we are committed to implementing measures to fully address any areas of need discovered through this process,” concluded the letter.

Sure, there are a lot of rumors swirling regarding this situation, but teachers weren’t stopping this phenomenon, and that’s suspicious. Either they were the ones doing it or didn’t see it as a problem. Both are awful.

If there is one silver lining of this horrendous pandemic and the government-imposed lockdowns it’s that more parents are realizing what public schools are doing to children. More kids are being pulled out of these leftist indoctrination centers that we call public schools and are being enrolled in private schools or are being homeschooled and that’s going to be much better for those kids and the country as a whole down the line.