The August report revealed that over 100 incidents of educators and staff at schools run by the United Nations Relief and Works Agency (UNRWA) in Gaza, the West Bank, Lebanon, Syria, and Jordan posted antisemitic, and in some cases, pro-Hitler posts on their personal social media accounts.

The report, entitled “Beyond the Textbooks,” uncovers 22 recent cases of UNRWA staff incitement which clearly violate the agency’s own rules as well as its proclaimed values of zero tolerance for racism, discrimination or antisemitism. UN Watch is calling on the agency’s major funders — including the U.S., Germany, the UK and the European Union — to hold UNRWA accountable to its own standards and commitments.

As revealed in the report, UNRWA staff stationed in Gaza, the West Bank, Lebanon, Syria and Jordan have publicly incited antisemitism and terrorism. Among the educators who have used their personal social media channels for such propaganda are UNRWA Gaza math teacher Nahed Sharawi, who shared a video of Adolf Hitler with inspirational quotes to “enrich and enlighten your thoughts and minds.” Husni Masri, an UNRWA teacher in the West Bank, posted antisemitic conspiracy theories according to which Jews control the world, created the coronavirus and seek to destroy Islam.
Source: U.N. Watch (Emphasis Added)

The United Nations has continually turned a blind eye to antisemitism in the Middle East while constantly labeling Israel as a human rights abuser — passing multiple resolutions every year against the lone functional democracy in the region.

PLO rep: “Some misguidedly say Israel is singled out in the UN…”https://t.co/AYnQzqTPiD

The Taliban could be given a seat on the Commission on the Status of Women since Afghanistan’s term on the council expires in 2025.

So, Israel is a human rights abuser for defending themselves against hostile neighbors and the Taliban has thoughts on how to make sure that women aren’t mistreated.

This kind of convoluted reasoning is par for the course at the United Nations.

Our colleague Jeff Dunetz over at The Lid posted a comprehensive history of the antisemitism in the UNRWA that is an absolute must-read: 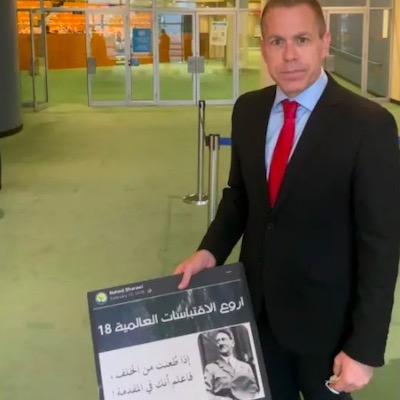 UN security personnel stopped Israeli Ambassador to the UN Gilad Erdan from bringing a display poster into the General Assembly on Monday showing a social-media post by a UNRWA teacher that glorified Hitler.

He had meant to display the post during a discussion on the United Nations Relief and Works Agency for Palestine Refugees so that he could illustrate his concern about the problem of incitement in UNRWA schools.

Ambassador Erdan called out the U.N. on the censorship.

Also on Monday, UNRWA Commissioner-General Philippe Lazzarini gave a report on schools in the Middle East teaching “refugee” students saying that he was “deeply proud of our education system and its resources” and insisted that the organization uses “best practices” to ensure that students are taught about “human rights, conflict resolution, tolerance, gender equality, and democracy.”

“Let’s be clear, UNRWA has a zero-tolerance policy for hate speech, incitement, discrimination, hostility, or violence,” said Lazzarini. “I am, however, acutely aware that we are operating in a highly divided and emotionally charged environment where zero risk does not exist.”

Lazzarini said that the increasing criticism of UNRWA is politically motivated and that those behind the attacks are eroding the rights of Palestinians and “do not have the well-being of Palestinian refugee children at heart.”

Erdan, in addressing the UNGA, said his attack on UNRWA was factual and not political.

“UNRWA is part of the problem, not the solution, and the time has come for the international community to hold it accountable,” Erdan said.

The refusal to allow Ambassador Erdan to show a poster of the offensive social media post follows the U.N. Human Rights Council in Geneva cutting off the video feed of U.N. watchdog, Hillel Neuer on Friday who was addressing the council on the same issue.

No joke: The U.N. Human Rights Council just cut me off for testifying about UNRWA teachers who glorify Hitler. Chair says I made “derogatory, insulting & inflammatory remarks”—by quoting their own Facebook posts. “This amounts to personal attacks. This statement is out of order.” pic.twitter.com/qPXohSdOfW

So according to @UN_HRC, it’s *derogatory, insulting and inflammatory* to call out the #Antisemitism expressed by teachers funded by @UNRWA, but it’s not a problem for these same teachers to praise Hitler on Facebook.

It’s just the warped logic of the United Nations.

Why are we still a member of this sham “international” organization that is a platform for dictators and human rights abusers while pushing globalism?

Trump really should’ve booted the United Nations out of NYC and turned the U.N. building into condos when he had the chance.

DEAR PATRIOTS: Should Trump SHUTDOWN The U.N. And Turn It Into CONDOS?