Who “fact checks” the “fact-checkers”? We all should, but this guy is actually doing it.

Jimmy Dore is a left-wing comedian and political commentator that has a very popular YouTube channel. He’s got over 909,000 subscribers to date.

Like his fellow comedian, political commentator, and YouTuber, Dave Rubin, Dore used to be part of the massive progressive YouTube channel, The Young Turks founded by Cenk Uygur. Dore left in 2019 and there has since been a very public and very ugly feud between TYT and Dore — specifically with current TYT co-host Ana Kasparian.

There’s a whole lot that you’ll disagree with Dore about, but he’s saying things that the left doesn’t want to be said and they’re going after him with a vengeance.

Here’s the goal of Dore’s channel summed up in two minutes (LANGUAGE WARNING):

For the past several months, Dore has been slamming the coverage of the pandemic and vaccines and he’s been hitting it pretty hard.

Dore has been “fact-checked” by Facebook a couple of times in the past — once for reporting on how the Democrat votes in Iowa were flipped from Bernie to Buttigieg, and again more recently for saying that some SARS-CoV-2 vaccines are being administered incorrectly. (Check here to get sucked into that wormhole of interesting information!)

In a recent show, Dore cited a study by Harvard that was published on the website of the National Institute of Health (NIH) that was titled, “Increases in COVID-19 are unrelated to levels of vaccination across 68 countries and 2947 counties in the United States.”

In an October 17 video, Dore goes through the data that shows that vaccination alone isn’t stopping the spread of the China Virus. You can agree or disagree with his assessment, but you can’t claim that when he was quoting the study that he wasn’t quoting the study.

Still, Politifact, one of Facebook’s “independent fact-checkers” took umbrage with the title of his video, flagged it, and rated it “half true.” But what’s fascinating is that they don’t actually dispute what Dore says in the video.

Here is Jimmy Dore blasting PolitiFact for their “Pants On Fire” fact-check. He calls out the author by name saying that it’s not a “fact check” it’s an “intention check” and it’s just *chef’s kiss* perfect.

You’re going to love how Dore blasts Facebook by citing the origin of the website, by the way. It’s a timely reminder now that Herr Zuckerberg is trying to rebrand the company as “Meta.” What, was “Stealing your MetaData And Selling It To China” too long?

One thing that Dore doesn’t mention is the sourcing that PolitiFact used… they cited far-left “progressive” magazine and website, Mother Jones. 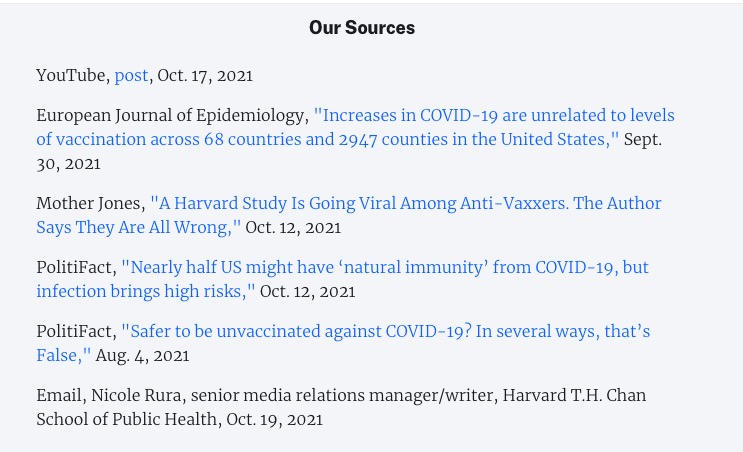 Dore then suggested that there is a more nefarious reason for their bogus fact-check — it’s to delegitimize people that go against the left-wing established narrative. In the video, Dore calls PolitiFact a “disaster” that asserts that is a “propaganda organization.”

He’s not wrong on this.

The “fact-checkers” are overt activists acting out the 2017 Media Matters War Plan to push a left-wing agenda. It’s all there in black and white… and blue. Because it’s always about pushing the Democrat agenda.