Didn’t Democrats call it “racist” and “xenophobic” back in early 2020 when President Trump banned travel from China at the beginning of the pandemic?

Yes, indeed they did.

And yet… the Biden-Harris administration has announced that travel will be restricted from 8 African nations in order to prevent the spread of a new “variant of concern” that has been dubbed the “Omicron” variant.

Earlier this morning, Dr. Anthony Fauci was on CNN saying that there were many mutations on the spike protein with this variant that is causing concern among scientists, but said that it was “too soon” to enact a travel ban.

Dr. Anthony Fauci joins @NewDay and says “they are in very active communication” with their South African colleagues….It is a fluid motion. It is something in real time we are learning more and more about.” pic.twitter.com/ihioRwTYgZ

The countries travel will be banned from are South Africa, Botswana, Zimbabwe, Namibia, Lesotho, Eswatini, Mozambique, and Malawi.

US citizens and green card holders will still be able to travel into the US from the banned countries, but no one else will be allowed.

Biden announced the ban on Friday hours after his top COVID expert, Dr. Anthony Fauci, said in an interview that it was too soon to enact such measures.

The World Health Organization named the new variant on Friday and also officially categorized it as a strain of concern.

Speaking outside the Nantucket Tap Room where he had lunch on Friday afternoon, he told reporters that he’d spoken with his team for half an hour on Friday, and that the ban was the result of that meeting.

‘We don’t know a lot about the variant except that it is a great concern and seems to spread rapidly. I spent about a half hour this morning with my covert team led by Dr. Fauci and so that was the decision we made,’ he said.
Source: Daily Mail

It’s unclear if the variant is more deadly or will affect younger cohorts, just that it has a lot of mutations and seems to spread rapidly.

But it’s a month out from Christmas, so it’s time for everyone to panic.

So… banning travel to 8 African countries to potentially stop a virus strain that might already be in the United States is fine, but securing the border is “inhumane.”

Here is triple-vaxxed President Biden shuffling out of a restaurant in Nantucket wearing a mask outside which he then removes to talk to the press about his administration’s handling of the Omicron variant.

Back in early 2020, Biden called the travel ban “xenophobic.”

We are in the midst of a crisis with the coronavirus. We need to lead the way with science — not Donald Trump’s record of hysteria, xenophobia, and fear-mongering. He is the worst possible person to lead our country through a global health emergency.

Just a few weeks later, he said that it was pretty clear that banning travel wasn’t going to stop the virus.

A wall will not stop the coronavirus.

Banning all travel from Europe — or any other part of the world — will not stop it.

This disease could impact every nation and any person on the planet — and we need a plan to combat it.

He did it in one of his few in-person events, too. He said, “banning travel from any part of the world may slow it, but it will not stop it.” Biden committed to “lead with science.”

Even more hilarious is how Biden bashed Trump for banning travel from some African countries that hadn’t met security standards set by the United States.

Trump further diminished the U.S. in the eyes of the world by expanding his travel ban. This new “African Ban,” is designed to make it harder for black and brown people to immigrate to the United States. It’s a disgrace, and we cannot let him succeed. https://t.co/oePD5eSAWY

Libs just have to inject race into everything, don’t they?

It’ll be nice when they realize that this is a bad idea.

A statement about the decision to institute a travel ban was posted to Biden’s @POTUS Twitter account.

The @WHO has identified a new COVID variant which is spreading through Southern Africa. As a precautionary measure until we have more information, I am ordering air travel restrictions from South Africa and seven other countries.

For the world community: this news is a reminder that this pandemic will not end until we have global vaccinations. The U.S. has already donated more vaccines to other countries than every other country combined. It is time for other countries to match our speed and generosity.

Of course, President One Trick Pony is pushing vaccination as the only recourse.

Just turn everyone into walking pincushions and that’ll fix it despite the waning efficacy of the jabs, right?

Can’t you just hear the cries from the blue states saying, “iT’s ThE pAnDeMiC oF tHe UnVaCcInAtEd”?

Yes, Africa does have a low vaccination rate, but it appears that the Omicron variant was first detected in 4 vaccinated individuals.

The Botswana Government says that the new COVID variant (named Omicron) was first detected in four patients who were FULLY VACCINATED for COVID. https://t.co/twfaWmK2Gu 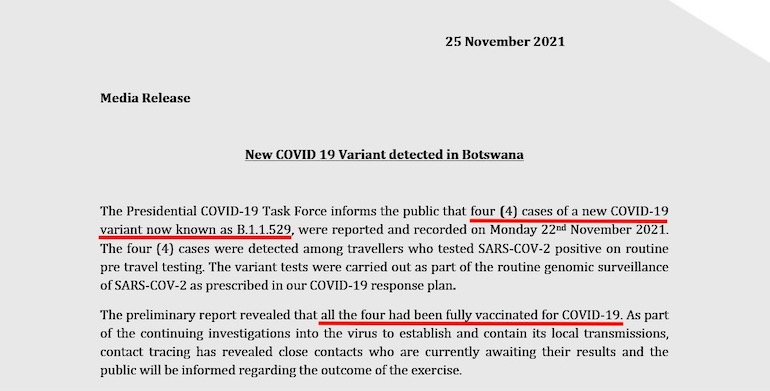 By the way, if you know the Greek alphabet, it appears as though they skipped a couple of letters. The World Health Organization has made a decision to skip over Nu because it’s too easily confused with the English word “new” and the next letter Xi… for obvious reasons.

News of new Nu variant, but WHO is jumping the alphabet to call it Omicron, so they can avoid Xi. pic.twitter.com/UJ4xMwg52i

As Louisana Senator John Kennedy said, “If you turn Xi Jinping upside down, the WHO would fall out of his pockets.”

But you know that Xi Jinping is applauding this decision to not tie the virus to China in any way. 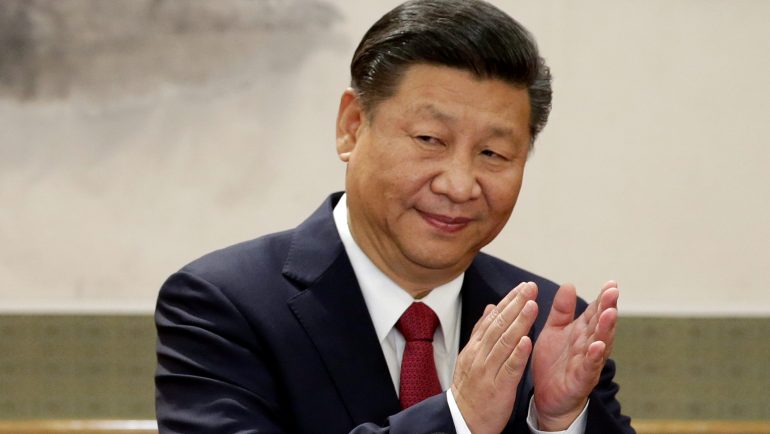 The truth is… these are all “Xi variants” of the China Virus.