For anyone not yet convinced that the activist left is motivated by a pseudo-religious impulse, this story is for you.

Such impulses are nothing new to the activist left, just look at the religious zeal in their Gaia-worship. But in the last couple of years, especially with the rise of ‘cancel culture’, they have turned it up to eleven.

The framing of the George Floyd incident raised his status to that of a Secular Saint. With his criminal history, the heavy emphasis here is on the ‘secular’. That hasn’t stopped religious expression from growing out of his mythology. The site of his death has become a focal point for baptisms. Explicitly religious-themed art has been cropping up. 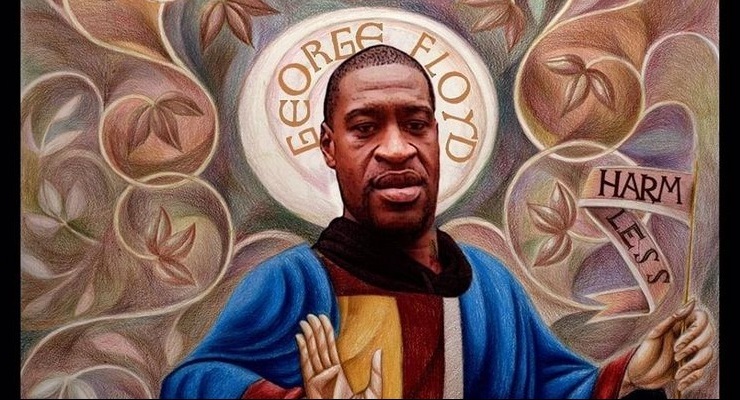 Now he’s being cast in the role of Jesus himself with artwork hanging in no less prominent place than The Catholic University of America. 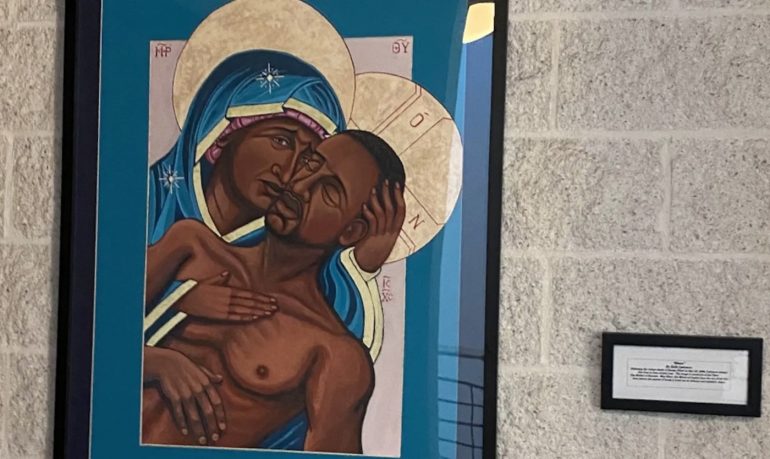 Blayne Clegg, a junior at the Catholic University of America, was shocked when he saw the painting hanging outside the law school’s chapel a few weeks ago.

“There’s a fine line between recognizing the innate dignity and righteousness of human beings that are made in the image of God and embracing brazen, progressive politics,” Clegg told Fox News.

…Students’ reactions to the painting have been “universally negative,” Clegg told Fox News. “I haven’t found anybody who’s been able to give a serious theological justification for this kind of heretical, blasphemous idolatry.”

“Jesus has been depicted as many different races, but Jesus is always depicted as nothing but Jesus, the sinless son of Almighty God,” Clegg continued. “There has never, to my knowledge, been any serious, respected Catholic theologian or icon maker who has depicted Jesus Christ as another human being.” —FoxNews

Students are petitioning to have it remove, but the faculty are, thus far, unresponsive.

'It shows you how some of the extreme left have lost their marbles'@Nigel_Farage gives his reaction to a university in the United States displaying a painting depicting George Floyd as Jesus. pic.twitter.com/mJPD7VZIVv

The artist who painted ‘Mama’ was clear that this was, in fact, supposed to represent George Floyd, who called out for his own mother as he lay dying. It was a conscious artistic decision to evoke the imagery of, ‘Pietà – the Mother of Sorrows’.

Michelangelo’s famous sculpture depicted the moment Christ’s mother embraced his body after it came down from the cross. 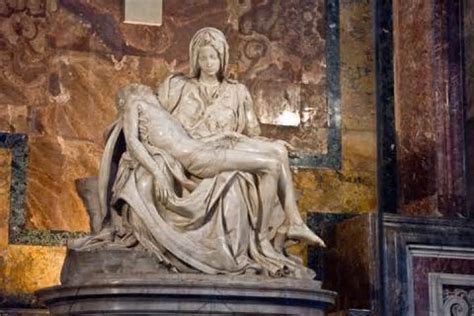 Other artists have depicted the same scene, in different ways…

But in every case of historical art, there was absolute clarity as to who the people represented were. Only Jesus ever gets the halo with those inscriptions.

On the other hand, the description accompanying the Floyd-themed artwork states:

“Following the violent death of George Floyd on May 25, 2020, Latimore created this icon in June of that year,” says a description posted with the painting, according to photographs obtained by The Daily Signal.

“The image is evocative of the Pietà—the Mother of Sorrows,” the description continues. “May Mary, the Mirror of Justice hear the cry of all who have known the sorrow of losing a loved one to violence and injustice. Amen.” — DailySignal

‘Losing a loved one to violence and injustice, eh?’ Apparently the Catholic university has forgotten what Jesus had to say about it.

The halo and the markings in the image, according to the established rules of Catholic iconography are reserved — exclusively — for depictions of the sinless son of God.

The Catholic university, despite the artist having stated this image was of George Floyd, have faced blowback from outraged students, but maintain it’s not idolatry, but a stylized depiction of Jesus.

Here’s the artist’s own words on the issue.

“The common question that people asked was, ‘Is it George Floyd or Jesus?’ The fact they’re asking that question is part of the problem,” he told the publication. “My answer was yes.”

Latimore called this a “nonanswer” and said it “frustrated the hell out of a lot of people.”

Artists have a right to paint whatever they choose. That doesn’t mean the rest of us need to dignify it by giving it a place of honor.

If that artist likes Catholic ideas so much, how about reading more Augustine? Especially the part about ‘disordered loves’ where someone’s upside-down priorities are the cause of sin.

Sin, Augustine said, is ultimately a lack of love, either for God or for your neighbor. He famously stated that “The essence of sin is disordered love.”

Disordered loves means that we often love less-important things more, and more-important things less than we ought to, and this wrong prioritization leads to unhappiness and disorder in our lives. — NickCady

For that matter, maybe the deans of the university could read it too.

After that, who knows? Maybe they could even start with the Bible.

If you want to see artwork that belongs on the walls of a self-proclaimed Christian university, this book is crammed full of it. You can peruse the ‘Biblical Badasses‘ series within the author’s gallery site, too.