Dividing people as “us” versus “them” and then treating the groups differently used to be called discrimination. Now it’s called “public health.”

Politicians in Austria will decide on Sunday if they will impose harsh restrictions on the unvaccinated nationwide as the country faces a surge in coronavirus cases as winter begins to set in.

Austria has recorded thousands of new coronavirus cases daily and is approaching 10,000 new cases per day.

A chart from Our World In Data shows how significant the spike is in cases per million: 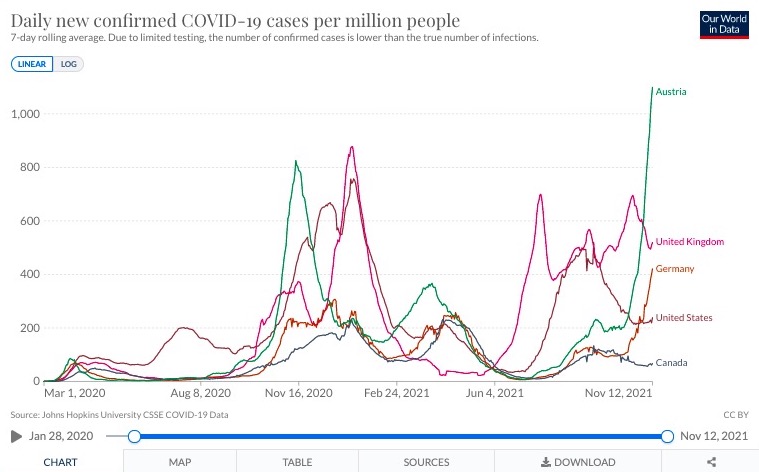 The wave hitting Austria is putting a strain on their healthcare system and lockdown measures kick in when 30% of ICU patients are there for treatment of the Wuhan Virus. The ICU rate is currently at 20%.

Lockdowns for the unvaccinated will go into effect on Monday in the hard-hit regions of Upper Austria and Salzburg. Those who haven’t received the jab will only be permitted to leave their homes for “essential” reasons.

It should be noted that in many places in Europe, including Austria, the “Green Pass” vaccine passport allows for documented proof of recovery from the China Virus in the past 6 months or a negative PCR test as well as vaccination to allow access to public spaces. However, Austria has removed the testing option and is only allowing vaccination or proof of recovery for exemptions from new restrictions.

The new measures are meant to coerce the vaccine-hesitant to get the jab or risk being ostracized from polite society.

Approximately 64.7% of Austria’s entire population — which includes children ineligible for the vaccine — has been vaccinated with two shots, while neighboring Germany, which is also seeing a spike in the virus, has a vaccination rate that is only slightly higher with 67.7% “fully” vaccinated.

The fully-vaxxed rate in Austria is slightly below neighboring countries besides Germany — Italy 72.4% and Switzerland 65.6% — but higher than others in the region such as Hungary 59%, Czech Republic 58.2%, Slovenia 54.7%, and Slovakia 42.6%.

Still, Chancellor Alexander Schallenberg has bemoaned Austria’s vaccination rate as “shamefully low” and is pushing to make the lives of the unvaccinated uncomfortable in order to force them to give in.

“A lockdown for the unvaccinated means one cannot leave one’s home unless one is going to work, shopping (for essentials), stretching one’s legs – namely exactly what we all had to suffer through in 2020,” Mr Schallenberg said, referring to three national lockdowns last year.

Austria has taken a series of measures to curb the spread of COVID-19 and encourage more people to get vaccinated in recent weeks.

The decision to impose a nationwide lockdown for the unvaxxed is expected to be made on Sunday.

Austria’s government is likely to decide on Sunday to impose a lockdown on people who are not fully vaccinated against the coronavirus as daily infections have surged to record levels, Chancellor Alexander Schallenberg said on Friday.

Schallenberg did not say when the lockdown would take effect, but the two provinces hardest-hit by this wave of infections, Upper Austria and Salzburg, will introduce the measure for themselves on Monday.

Roughly 65% of Austria’s population is fully vaccinated against COVID-19, one of the lowest rates in Western Europe. Many Austrians are sceptical about vaccines, a view encouraged by the far-right Freedom Party, the third-biggest in parliament.
Source: Reuters

The move is expected to pass despite the vaccinated also being able to spread the virus as we have seen with “breakthrough” cases that continue to rise in highly-vaccinated regions like the United Kingdom.

On Thursday, Schallenberg said, “The aim is very clear: that we give the green light this Sunday for a nationwide lockdown for the unvaccinated.”

He added that the spike in the virus is straining on the hospital system including intensive care, so they need to move quickly.

“The development is such that I do not think it is sensible to wait … We will take this step now and my wish is that we take this step on Sunday and nationally for all nine provinces.”

The world is watching with shock as Austria moves to ostracize a large chunk of its population due to refusal to take a vaccine that has shown that has waning efficacy and doesn’t stop someone from contracting and spreading the virus.

Here is an English version of a French news program discussing the new measures.

But some are exposing just how awful they are.

Juliane Bogner-Strauss, a health miniser in Styria, a province in Austria’s southeast, faced backlash and is trying to smooth things over after comparing the unvaccinated health care workers to “angels of death” a reference to Joseph Mengele, the Nazi doctor in Auschwitz that sent people directly from the trains to the gas chamber and performed horrific medical experiments on many of the inmates who didn’t face immediate death.

It shouldn’t be much of a surprise. Hermann Schützenhöfer, the governor of Styria wants to remove choice in the matter altogether. Schützenhöfer has consistently been pushing for stricter measures and even suggested compulsory vaccination a year ago when the vaccines weren’t yet widely available.

In December 2020, Schützenhöfer publicly spoke out in favor of compulsory vaccination in order to get the corona pandemic under control. At that time no vaccine was available in Austria, and shortly after Christmas the first doses were vaccinated. Much opposition and little support for the proposal followed. The Styrian governor touched on the topic again and again, but never put it so clearly.

In view of the dramatic development, especially in the hospitals, it is becoming more offensive again. Compared to the “standard”, he says that a referendum must be considered if the new restrictions, including the 2G rules, no longer apply. Schützenhöfer states, however: “A referendum on compulsory vaccination would only be the last resort.”
Source: Kronen Zeitung

The move is being cheered on by at least one academic who thinks that the move to force experimental vaccines that don’t have long-term data and appear to require multiple jabs a year would pass in… *checks notes* …Austria.

The Graz Med-Uni-Rector Hellmut Samonigg is clearly in favor of a vote. “This would finally take the air out of the discussion about compulsory vaccination,” he says now.

“I don’t understand why politicians are afraid to question the people on this important issue. I can’t understand why we don’t do that? ”Says the university rector, who is certain that – if the question is sensitive – the majority would vote for a yes. Samonigg is known for perseverance and clear positions. As one of the main initiators of the “Don’t smoke” popular demand, he made a significant contribution to the ban on cigarettes in the catering trade.
Source: Kronen Zeitung

Austrian regional governor Hermann Schützenhöfer also wants to hold a referendum on forcing everyone to take the vaccine.
Are they going to hold people down against their will? https://t.co/e11nEqNVql

Look at that. Austrian politicians want to tell people what to do with their bodies and punish them as “other” if they don’t. Who could’ve seen that coming?

But, people in Austria aren’t taking it lying down.

Huge protest against the #MedicalApartheid, where the unvaxxed are NO longer allowed to leave their homes?!!!

People in Linz, Austria are demonstrating against the announcement that the government will be imposing a lockdown for unvaccinated people in Austria. pic.twitter.com/VGdAKillve

What happens when the “fully vaccinated” are the ones who continue to spread the virus in Austria while the unvaccinated are locked down?

We’ll just have to wait and see…