Beantown has elected a visible minority woman as the new Mayor, but she’s apparently not the “right” race according to a publicly-funded “news” organization.

Michelle Wu, a lefty that was endorsed by Massachusetts Democrats in Congress — Senators Elizabeth Warren and Ed Markey, as well as Congresswoman Ayanna Pressley — won the Mayoral race on Tuesday, November 2, and according to the race-obsessed on the left, this was “historic” since it was the first time in Boston’s history that a white man was not elected.

But for the wokescolds in deep-blue Boston (and at National Public Radio,) electing a woke Asian woman just wasn’t good enough.

NPR posted an article about the reaction to Wu’s election titled, “Why Boston will need to wait longer for its 1st elected Black mayor.” 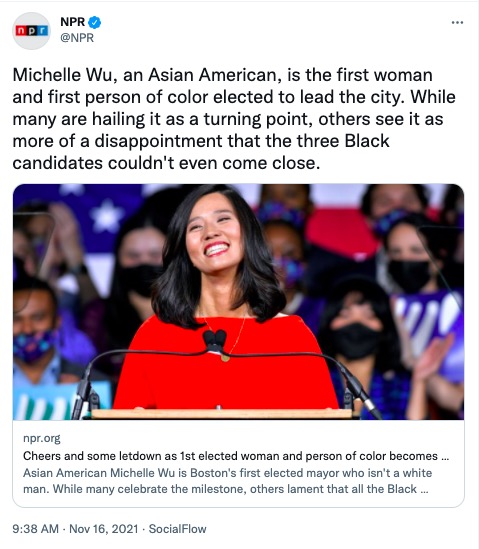 They posted a new link to the article with a different photo and an explanation.

We realize we don’t always get things right the first time, and our previous tweet/headline misrepresented the story.

We deleted the previous tweet, which was causing harm, and have updated the story

It certainly did harm to the tatters of what remains of NPR’s reputation as a news organization.

It’s an absolutely shameful article that included the line, “Cheers and some letdown as 1st elected woman and person of color becomes Boston Mayor.”

There isn’t anything in the article about the platform of the candidates, or how they were perceived by voters — it was all about race alone as though that’s the only thing that matters.

The article was despondent that the black candidates didn’t fare better in the race, including Boston’s Acting Mayor Kim Janey.

For the first time in its history, Boston is inaugurating a newly-elected mayor on Tuesday who is not a white man. Michelle Wu – who’s Asian American, is the first woman and first person of color elected to lead the city. While many are hailing it as a major turning point, others see it as more of a disappointment that the three Black candidates in the race couldn’t even come close.

Many in Boston were hopeful that this would be the year, in this time of racial reckoning, that Boston might elect its first Black mayor, as most of the nation’s 30 largest cities have already done.

Three Black candidates were in the race, and one even had the advantage of running as an incumbent, after automatically inheriting the job – as an interim- when former Mayor Marty Walsh left to become Secretary of Labor in the Biden administration. And yet, neither Acting Mayor Kim Janey, nor the others, even made it to the final run-off election this month.

For what it’s worth, according to Michelle Wu’s website, Acting Mayor Kim Janey endorsed Wu… so, perhaps that was a strategic error on Janey’s part if she was the one that wanted to be elected.

Indeed, in the preliminary election, the three Black candidates combined got about three quarters of the vote in areas of the city with the highest concentrations of people of color. But in the whitest areas, they won only about one quarter of the votes, according to an analysis of election results and Census data conducted by The MassINC Polling Group.

“I mean the data speaks for itself, and it’s troubling,” says former Massachusetts State Rep. Marie St. Fleur. Especially, she says, for a city still straining under a longtime reputation as racist.

“For those of us born or raised in Boston, and who lived through some of the darker days, the fact that we blinked at this moment is sadness,” she says. “At what point in the city of Boston will we be able to vote — and I’m going to be very clear here — for a Black person in that corner office?”

The theory put forward in the article is that the three black candidates split the vote and the black community should have coalesced around one candidate.

They write this unironically because they don’t see people as individuals but rather as members of an identity group that are interchangeable.

This is how the identitarian left that is totally obsessed with race think — that the skin color on the outside indicates the ideology, values, experience, and even morals of the person. That sort of thing used to be considered “racist” but in our modern “enlightened” era, this racialized view of the world is now accepted on the left and is so pervasive that it’s even being pushed by a public broadcasting company.

The article does note that some leaders in the black community, although disappointed, have said that perhaps the black candidates just weren’t as electable.

“We can only play race card for so many occasions,” asserts Rev. Eugene Rivers, a longtime Black community leader. “I mean Black leadership failed to produce success even with an incumbent. We failed. Now that’s not on white people.”…

Paris Jeffries says he also feels “grief” that a Black candidate didn’t make the cut this year. But while important symbolically and psychically, he says, a candidate’s race should not be the determinant in any race.

“In this anti-racist discourse, I don’t think we’re going to find identical twins of our experience in order for [candidates] to empathize,” he says. “I think we have to start creating a larger tent and find common ground together.”

It looks like there’s still a little sanity out there with the suggestion that people can come together and agree on things even if they don’t share skin color.

Unfortunately, it appears that Paris Jeffries didn’t get the memo that “anti-racism” is actually just racism in disguise. Just ask Ibram “Hank” Rogers, the guru of “anti-racism” who has created a successful grift by changing his moniker to Ibram X. Kendi, trashing Christianity, and talking in circles without actually defining his terms.

But as we can see with Kendi’s success, there are still some people out there that are absolutely obsessed with identity. One of whom is the outgoing Acting Mayor.

For her part, outgoing Acting Mayor Janey struck a similar message, insisting her time in the corner office did push Boston forward, and left the city better off than it had been, largely because she approached every issue —from housing to schools and health care — “through a lens of racial equity.”

Still, she adds, “There’s a lot more work to do, when it comes to all our ‘-isms,” in Boston and around the country.
Source: NPR

What a horrible world where “every issue” has to be viewed “through a lens of racial equity.”

This is what viewing healthcare through the lens of “equity” does:

That NPR article — that originally appeared with her photo — was published on the same day as Wu was sworn in.

NPR was bashed by both the left and the right for the tweet and the article.

NPR appears to be having a struggle session because the wrong type of female minority won the Boston mayoral election. pic.twitter.com/FPwKHbEB0a

NPR had applauded the diversity of the contenders. What changed? Why downplay an Asian American woman’s win? pic.twitter.com/FizBISLYxN

The tweet by @NPR was deleted but here is a screenshot.

NPR demonstrates once again it is undeserving of taxpayer funded grants. pic.twitter.com/qPEmI6rNAd

We shouldn’t evaluate people based on skin color period

Ponder this deleted tweet by @NPR. Imagine the kind of worldview one has to think this way—hyper race consciousness, obsession with racial hierarchies, and merit & fairness inversion. Now imagine an entire channel devoted to promulgating this ideology. That is what NPR has become pic.twitter.com/Y9MEXTIXvs

Meanwhile, on NPR on Monday…

She is Korean American and has two passions: rocking out on her electric guitar and skateboarding. She’ll be formally introduced in a special that drops on Thanksgiving. pic.twitter.com/Enjfn7lYu6

It looks like the problem that NPR has with Michelle Wu is that she’s not a muppet.