With the language folks have been using to defame him, you’d think he was a Trump, not a Kennedy.

Tucker Carlson played a clip of the interview he had with RFK Jr. on his streaming show, and reactions to it have lit up the internet. What did he say that was so explosive? Ah, nothing much. He just cited the CDC’s own VAERS numbers.

So what set everyone off? It wasn’t the quotation of scientific data. It was how he presented that data. He put it in a context that ‘triggered’ people.

Unlike many of our readers that would be opposed to mandates but may have a more nuanced or pragmatic position on the use of vaccine itself with different people and different circumstances, Kennedy has a history of opposing vaccinations more generally. Knowing his biases helps us take what he says with the appropriate grain of salt.

Still, that history tells us more about his personal biases than it ever could about the validity of the official government information he is citing. What he said that lit up the internet can be summed up in a few short sentences.

‘There have been 17,000 deaths reported to VAERS from the Covid vaccines,’ Kennedy, a professor at Pace University, said Monday.

‘And that’s more, in the last eight months, than all vaccines – the billions and billions of vaccines – combined over the past 30 years.

‘This vaccine appears to be killing more people than all vaccines combined.’ — DailyMail

The Daily Mail, who has a strongly pro-vaccine bias, went straight to work attempting to discredit and dampen his claims, citing a doctor who clearly holds the same bias. Where did they get this doctor? From the left-wing activist site, Mediaite. So take what he says with a grain of salt, too.

‘VAERS was intended to cast a wide net to capture any possible or potential complication that even has the remotest possibility of being related to the vaccine,’ Dr. Shanker said.

‘Any adverse event is considered reportable. This ranges from direct symptoms, such as fevers or hematomas, to events such as death from blunt trauma in a car accident (which, of course, is highly unlikely to be related to the vaccine). — DailyMail

He wants you to think this reporting is slapdash and irresponsible. Earlier this year, ClashDaily wrote up an article showing exactly what level of information was included in this reporting. (Note how the paperwork was obviously completed by someone with an understanding of medicine.) The COVID Vaccine Statistic The Media Has Been Under-reporting

But it wasn’t so long ago when sites like ours were censored for applying that very same logic to questioning the official death count from COVID itself, objecting to instances where someone who had the Wuhan China virus had a potentially unrelated cause of death.

Yet somehow, it wasn’t ‘disinformation’ to blur the cause of death distinction when deaths could be linked to the virus and not to the vaccine.

How about the effort that was made to blame the death of Colin Powell on ‘the unvaxxed’, with zero evidence that the unknown person who passed it to him had not been vaccinated?

Are we applying fair standards to our data and our news sources? Let’s look at what we know.

The CDC was slow to update it, but they are obligated to provide data about any side effect that falls within a certain time frame after a vaccine. They eventually did a data dump revising the numbers dramatically higher all at once. The revised numbers

From the CDC’s own site:

VAERS is an early warning system used to monitor adverse events that happen after vaccination. VAERS is the frontline system of a comprehensive vaccine safety monitoring program in the United States. It is one of several systemspdf icon CDC and the U.S. Food and Drug Administration (FDA) use to help ensure vaccines used in the United States, including COVID-19 vaccines, are closely monitored for safety.
VAERS gives vaccine safety experts valuable information so they can assess possible vaccine safety concerns, including the new COVID-19 vaccines. It is especially useful for detecting unusual or unexpected patterns of health problems (also called “adverse events”) that might indicate a possible safety problem with a vaccine.
If a health problem is reported to VAERS, that doesn’t mean that the vaccine caused the problem. It warns vaccine safety experts of potential problems that they may need to assess, and it alerts them to take further action, as needed. — CDC

Here’s the warning they give for the correct application of the data:

VAERS reports alone generally cannot be used to determine if a vaccine caused or contributed to an adverse event or illness. Some reports may contain information that is incomplete, inaccurate, coincidental, or unverifiable. VAERS reports often lack contextual information, such as total vaccinations given or information on unvaccinated groups for comparison. Most reports to VAERS are voluntary, which means they may be subject to biases. Data from VAERS reports should always be interpreted with these limitations in mind. — CDC

Just like the death clock splashed all over TV didn’t give us context of what percentage of people with the Wuhan China virus got well again. Not to mention how officials in the media and elsewhere downplayed the comorbidities and median ages of those who died. But none of those ‘context’ issues seem to matter to the internet censors.

One social media quip framed it this way:

Is it a joke? Sure. But it reminds us that the fear-mongers are only giving us part of the story… and they are doing it because they WANT the fear to continue.

Why is the VAERS data important? Because it provides the raw data that can let experienced eyes see patterns. Patterns like, say, myocarditis, which was denied — at least until there were enough ‘anecdotes’ to become a data point.

We also know that the reporting process is arduous and time-consuming. For that reason, among others, this undercover video shows that in at least some instances, these adverse effects are often UNDER-reported. WHISTLEBLOWER: Project Veritas Hidden Video Exposes Adverse Effects Of ‘THE JAB’

Meanwhile, we know that tragic cases like the story of Ernest Ramirez’s son have been blacked out by Tech Tyrants enforcing Covid Orthodoxy: GoFundMe Spikes Grieving Dad’s Fundraiser Because Of COVIDictator Conformity

Lest you think his story is a one-off: 39-Yr Old Mother With No Known Health Problems Dies 4 Days After Second Dose Of COVID Vaccine

With all that context established, remembering that every single vaccine now in use plays by exactly the same reporting rules, let’s come back to Kennedy’s central claim.

VAERS data has been recorded since 1990. Here is a table drawn from their existing data. (Source) We have highlighted the line comparing the statististics on fatalities. 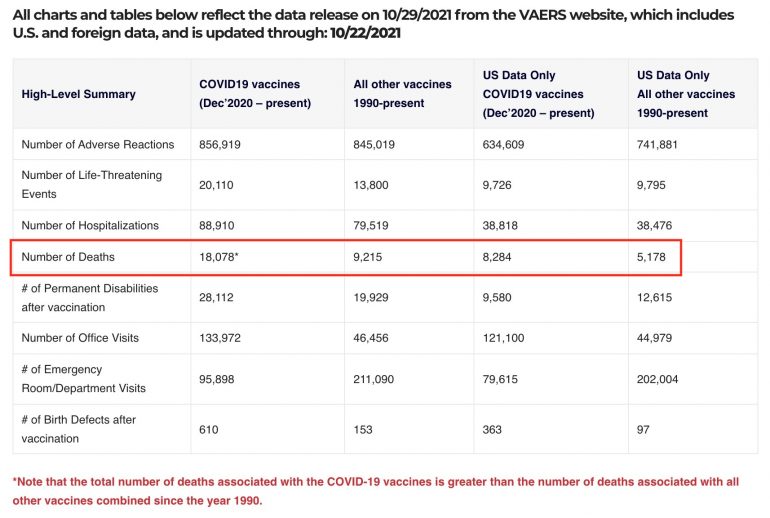 Whatever you may think of Kennedy, the statement he made is, strictly speaking, factual. It accurately describes the raw data we currently have available.

What we have not yet seen is the conclusion drawn from that data when the particulars of individual cases are properly taken into account.

Could there be entirely reasonable explanations for these deaths being so much higher than others? Sure. But let’s wait for that explanation before we jump to conclusions — in either direction.