This makes no sense whatsoever.

Assistant District Attorney Thomas Binger has become a household name for anyone watching the trial of Kyle Rittenhouse. Most of this is because of the way that he’s carried himself during the trial with precisely the kind of smarmy, duplicitous behavior that makes so many people despise lawyers.

Last week, Judge Bruce Schroeder blasted Binger for commenting in front of the jury about Rittenhouse’s “silence” after his arrest which is his Constitutional right.

On Monday, during closing arguments, Binger dropped a statement that shocked people on social media as well as lawyers who were commenting on the trial during the Rekeita Law livestream.

Binger said, “You lose the right to self-defense when you’re the one who brought the gun.”

Binger: “You lose the right to self defense when you’re the one who brought the gun.” pic.twitter.com/CFD3jcc8jg

If this is the case, then no one armed with a gun has the right to self-defense unless the person threatening them is armed with something equally threatening. According to the prosecution, a 17-year old has no right to defend himself against a 36-year-old who had been armed with a chain and had threatened to kill Rittenhouse earlier in the night.

Binger’s argument seems to be that Rittenhouse shouldn’t have been carrying a gun and that the gun itself was enough of a provocation to be attacked by the crazy lefties that were burning down Kenosha that night. Is that really what he’s going with?

In his closing arguments, Binger used a meme of the Patrick Swayze movie “Roadhouse” that read, “The Defendant brought a gun to a fistfight”.

Prosecutor Thomas Binger in the #KyleRittenhouse trial claims “you lose the right to #SelfDefense when you’re the one who brought the gun.”

?show continues after the break pic.twitter.com/75qX5tinRi

This guy is such a freaking clown!

Binger also did this.

This picture is giving me gun safety hives. pic.twitter.com/91dmFkEFzS

Dude… this is not acknowledging basic gun safety.

Rittenhouse brought the gun to Kenosha because businesses were on fire and police were letting it happen and the Governor of Wisconsin refused the National Guard troops when Trump offered them.

Whether it was wise or unwise to go there to defend the car dealership that was being torched nightly by rioters is a matter of debate, but let’s recall what Rittenhouse faced once he was there in Kenosha on August 25, 2020.

The first person shot by Rittenhouse, Joseph Rosenbaum, a homeless, bipolar, convicted child molester who had been released from the hospital earlier that day for a suicide attempt. He had made threats to kill any individual in the group that Rittenhouse was with if he got them alone.

Video evidence shows that Rosenbaum was chasing Rittenhouse while he was alone and a witness says he said, “F**k you” to Rittenhouse and lunged for his gun.

After shooting Rosenbaum, the crowd went after Rittenhouse and when he tripped and fell, he was kicked in the head by an unknown assailant, and then attacked with a skateboard by Anthony Huber, a man with a disturbingly aggressive background including battery and repeated convictions for domestic abuse.

9. Cell phone video of Rittenhouse on ground, shooting Huber & Grosskreutz then getting up and walking to the police line. #KyleRittenhouse pic.twitter.com/ZdUkytDSqj

Huber was the second person that Rittenhouse shot saying that he felt Huber grab his gun.

WATCH:
Yesterday Rittenhouse testified he felt Anthony Huber grabbing his gun before he shot Huber.
Here is a slow motion video of that incident that was just shown in court.#KyleRittenhouse #RittenhouseTrial pic.twitter.com/CfsFQUa1ln

Immediately after Huber, Rittenhouse shot a third person in the arm, Gaige Grosskreutz — often referred to as “Bye-Cep” or “Antifa Gaige” on Twitter — who admitted that he was shot after he pointed his illegally-carried Glock at Rittenhouse.

WATCH: Witness Admits He Advanced And Pointed His Gun At Rittenhouse And THEN Kyle Shot Him

It seems like a clear case of self-defense, but we’ll see soon enough if the jury agrees…

Meanwhile, the nonsensical ramblings like the argument  Binger have spawned a new word on Urban Dictionary… “Binger”.

The definition of the new word is, “A binger is a soy-filled authority figure who abuses his position to demonize others, especially people who can defend themselves who are a reminder of the fact the binger cannot. A binger riles up others against those he considered threatening to his position of power. Known for tight-fit skinny jeans, Star Wars lapel pins, and virginity.” 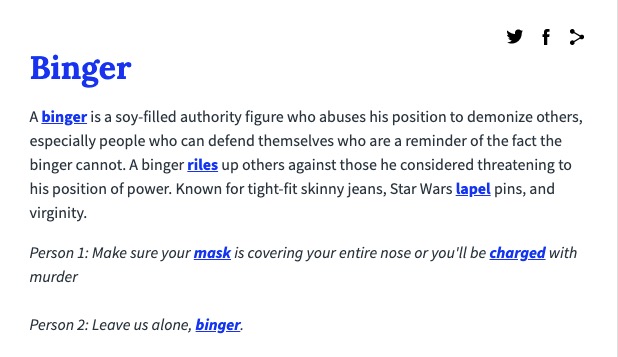 Remember kids… don’t be a Binger.