Trump and the political right is not the ‘danger to journalism’ we’ve been told it is for 4 years.

The real threat comes from the political left, against any news outfit that refuses to goose-step in time with their political masters.

We’ve seen it in the ‘Let’s Go Brandon’ administration with pressuring news agencies to be ‘nicer’, only calling on ‘approved’ reporters on the cue cards, and open calls for right-of-center news outlets to lose access to the White House press briefings.

We’ve seen a similar trend for years with Rebel News, perhaps the only news source that doesn’t march lockstep with the government-owned propaganda network, the CBC.

Despite their press pass, they’ve been repeatedly denied access to Trudeau’s public events, meaning it would shut out one of the only critical news outlets in what is becoming very nearly a one-party state in Canada. In a previous election, it took a court case to reinstate their access to Trudeau, but by the time that ran through the courts, the much-shorter Canadian election campaign was over or nearly so.

David Menzies, a reporter who would readily admit he has a reputation for being brash and loud-mouthed was standing on a public sidewalk waiting for Trudeau to arrive at a Christmas party so he could pepper him with some questions — as reporters have done since forever.

Trudeau’s private security detail — staffed by members of the federal police force, the RCMP (Royal Canadian Mounted Police) — saw Menzies standing there and decided to throw their weight around.

Three guys pushed a credientaled reporter around, crushing his face into a wooden billboard, for the grave sin of standing on a public sidewalk.

So, after demonizing us, demoralizing us, and defaming us for five years, his staff got the message. And so, they attacked us.

They smashed David’s face against the wall — David was so stunned; he couldn’t speak straight. They beat him up, they bloodied him. They destroyed his property.

David had to go to the doctor later that night — his ears were still ringing, and he was bloodied and cut.

There is no excuse for this.

The crime was committed by Trudeau’s thuggish bodyguards — who knew they were doing something evil and refused to tell David their names, despite the legal requirement to do so. —Rebel News

The news agency then called on city cops in Toronto to look at the evidence and press charges. The city cops refused to do so.

As any Canadian could tell you, in a defacto one-party state, any honest cops following up on this would be committing an act of career suicide. After all, criminal investigations into Trudeau himself were quietly swept under the rug by the same RCMP.

The RCMP, the three officers involved, and the Attorney General are personally named in a lawsuit. 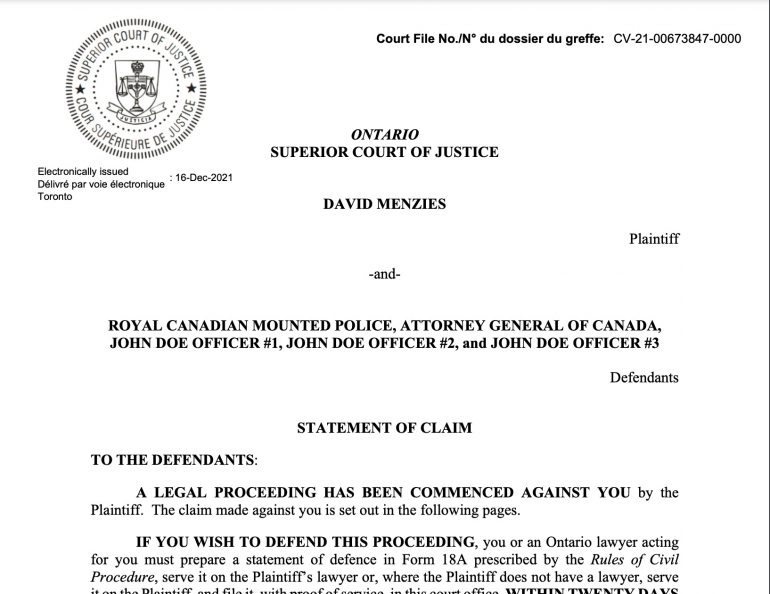