If officials want to be done with vaccine hesitancy, the simplest way to achieve that would be through maximum transparency with the public.

The last thing you want to do if you depend on the public trust is to appear as though you are hiding something… especially if what you are asking them to do is something invasive and irreversible. You know, like injecting a foreign substance into their body.

Skepticism might be entirely justifiable if the public whose unflinching obedience you were trying to compel caught those in positions of public trust hiding data directly relevant to the medical principle of informed consent, don’t you think?

Plenty of effort and energy has been spent on twisting the arms of the public and demonizing them for being vaccine-hesitant, but maybe it would help their cause if our ‘trusted authorities’ could stop beating their chests about how they are The Science™ long enough to look in a mirror and ask whether THEY are the problem here?

Remember how Pfizer said they could only produce 500 pages of FOIA request in a month and it would take DECADES to come clean with study details?

What showed up when they were forced to produce FOIA information raises even more.

The Pulse ran a story on the Adverse reactions recorded in the first 90 days of the Pfizer rollout.

Remembering that the concept of ‘informed consent’ that is foundational to medical ethics requires that a patient has a complete understanding of the known scope of risks and benefits before undertaking a medical procedure, do you remember any official news stories reporting these details?

A Freedom of Information Act (FOIA) request made by the Public Health and Medical Professionals for Transparency group has revealed that Pfizer was aware of 1,223 possible vaccine related deaths within the first 90 days of their COVID vaccine rollout.

…Table 1. in Pfizer’s documents accounts 42,086 reactions to their COVID-19 vaccine over a 90-day period from December 1st. 2020 – February 28th, 2021. 25,379 reactions were ‘medically confirmed’ while 16,707 were ‘not-medically confirmed.’ Pfizer also redacted the total number of vaccine doses that had been administered up to this point. –ThePulse

Notice, too, that the very same consideration we were never allowed to discuss regarding the reported COVID deaths was raised in their defense with respect to adverse reactions.

“An accumulation of adverse event reports (AERs) does not necessarily indicate that a particular AE was caused by the drug; rather, the event may be due to an underlying disease or some other factor(s) such as past medical history or concomitant medication.” –ThePulse

Cardiovascular abnormalities — a concern not raised until months later — were also detected in those 90 days.

Pfizer refused to release these documents until forced to comply by a court order.

Again, if the goal is to build trust, this is a really bad way to do it.

Hidden videos taken of our trusted experts aren’t helping build that trust, either.

But surely the CDC is standing strong and true, offering us all the relevant information we might need with neither deceit nor guile… right?

Well, we punched Pfizer 1,223 into a search engine, to see what came up.

The CDC website was one of the top hits, where it was talking about Pfizer and adverse effects. It brought us to this page here.

So far so good, right? Not so fast.

There was a lot of dense information to sift through on that page. Charts, different demographics. We took a chance and used a shortcut to find where the number 1,223 was used. Nothing came up. (Try it yourself.) So we tried another approach and searched for another term… death.

The one thing that came up on the page was this wall of jargon which seems to indicate that the control group and the vaccine group both had basically comparable adverse event profiles.

Well, THAT’s weird, don’t you think? After all, we’ve got a Pfizer document pointing to 1,223 deaths in the first 90 days. Did just as many people die of the placebo, too?

If that weren’t enough, ClashDaily ran a story on March 8, 2021, with screenshots of the VAERS reporting data which was already pointing to some 594 deaths. 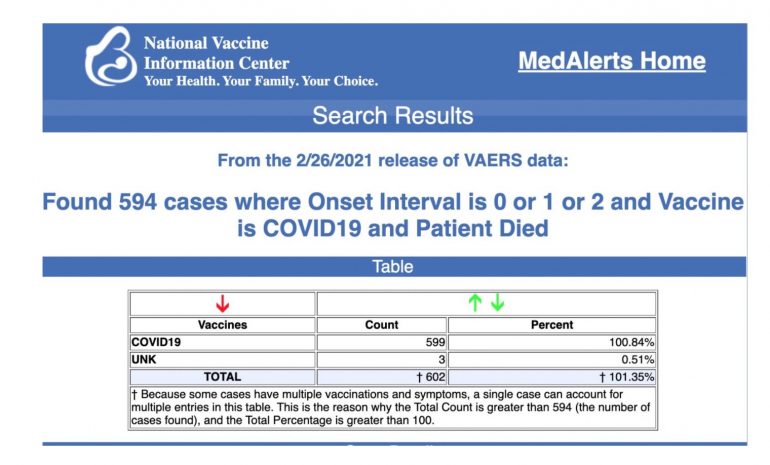 As of mid-Novemember VAERS was indicating deaths connected with the several companies’ COVID-19 vaccines totaled 17,000, giving it a risk profile entirely unlike that of ANY other vaccine since the VAERS system had been implemented. RFK Jr. Kicks Hornets Nest With THIS Claim About COVID Vaccine Safety Record

Even fear-addled Australia has acknowledged there are risks associated with vaccines. Thousands have signed up for compensation for provable injuries sustained, and at least 9 deaths have been attributed to the vaccine.

More Than 10,000 Aussies Submit Injury Claims For The Jab … Raising An Uncomfortable Question For Americans

We are now seeing a bait-and-switch with symptoms known to be associated with Adverse Effects of the vaccine being attributed to a new pandemic-related ‘stress syndrome’. Are Doctors Running Cover For Vaccine Injuries With Their New ‘PPSD’ Diagnosis?

Politicians and public officials are wringing their hands, wondering what it will take to force the public to comply with their demands we take the vaccine.

But the solution is staring them right in the face.

Stop with the fear-mongering and the threats, and speak to with us with the respect and dignity owed to a nation of free citizens with the right to say ‘no’ if we find your arguments are not compelling or in our best interests.