President Biden didn’t exactly get the warmest greeting from Kentucky residents on Wednesday.

The President went down to Mayfield, Kentucky where damage from a deadly tornado was the worst, and was greeted with a couple of shouts of “Let’s Go Brandon” from the crowd.

Two journalists that were there for Biden’s disaster photo-op, Austin Horn of the Lexington Herald-Leader, and Tara McKelvey of the BBC said that they both heard the chant that is a stand-in for “F**k Joe Biden” that was spreading like wildfire in crowded stadiums at college football games over the summer.

Two “Let’s go Brandon”s from the crowd as Biden gets out pic.twitter.com/1syheIGQx0

I’m with the president in Mayfield. Looking at destruction. There is a Trump flag and when Biden got out of the motorcade someone called: “Let’s go, Brandon.” They said it twice. https://t.co/5RuLK62O2Q pic.twitter.com/XTWtXE6ASu

Someone managed to catch the two shouts on video:

The @POTUS Twitter account tweeted, “I’m in Kentucky today to meet with local leaders and to survey the damage from the tornadoes and extreme weather. It will take all of us, working together, to recover and begin rebuilding — and we are committed to providing whatever support is needed for however long it takes.”

I’m in Kentucky today to meet with local leaders and to survey the damage from the tornadoes and extreme weather. It will take all of us, working together, to recover and begin rebuilding — and we are committed to providing whatever support is needed for however long it takes.

Here is the Shambling Husk of Mediocrity shuffling through the devastation for his photo op.

The Daily Mail reports that he ignored the hecklers.

President Biden arrived at the epicenter of Kentucky’s tornado damage on Wednesday to be greeted by jeers of ‘Let’s go Brandon’ before promising to meet the costs of the state’s first 30 days of emergency work.

The greeting, which is supposed to stand in for ‘f**k Joe Biden,’ was a reminder that this corner of Kentucky is deep red, and voted overwhelmingly for former President Donald Trump in the election last year.

But the president paid no attention as he toured a downtown reduced to mounds of rubble and piles of logs by tornadoes five days ago. The death toll in Kentucky stands at 74 – but is expected to rise higher – and another 14 people are reported dead in three other states.
Source: Daily Mail

Well of course he ignored them! First, he probably didn’t even hear them because the guy’s like 900 years
old, barely knows where he is, and — let’s face it — he was never the sharpest knife in the drawer.

If by some miracle he did notice, he had other priorities at the moment. Biden was in his element — his handlers let him out in public with his trusty face diaper pulled down while he was back to the greasy, slimeball, glad-handing politician that he’s been since the Carter administration… and there were children present.

We all know just how much Creepy Uncle Joe loves kids.

Somehow, Joe managed to dodge his “Super Creep” reputation despite all of that video and make it to the White House. Astounding.

But if you were Joe, you’d probably be wonder why you should pay attention to a couple of Trump-supporting rubes from Kentucky (of all places!) shouting mean things at you when you’ve got a child to sniff and grope, as well as some teen girls to make uncomfortable. 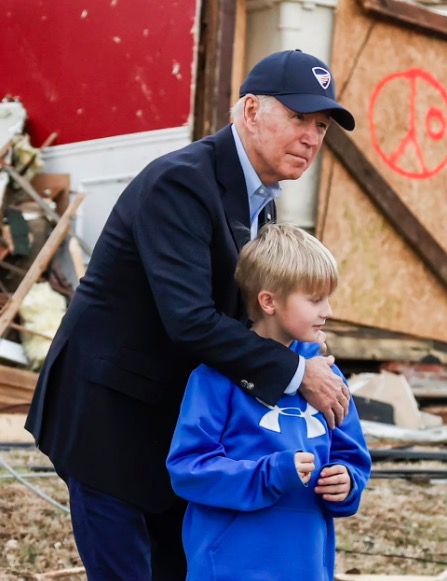 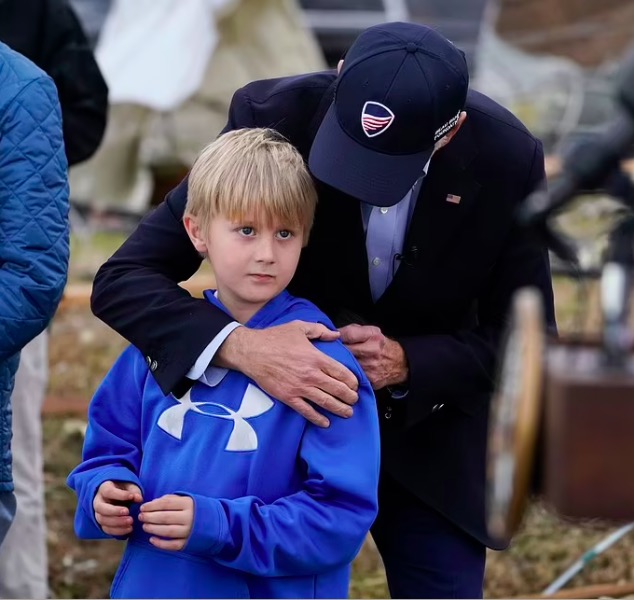 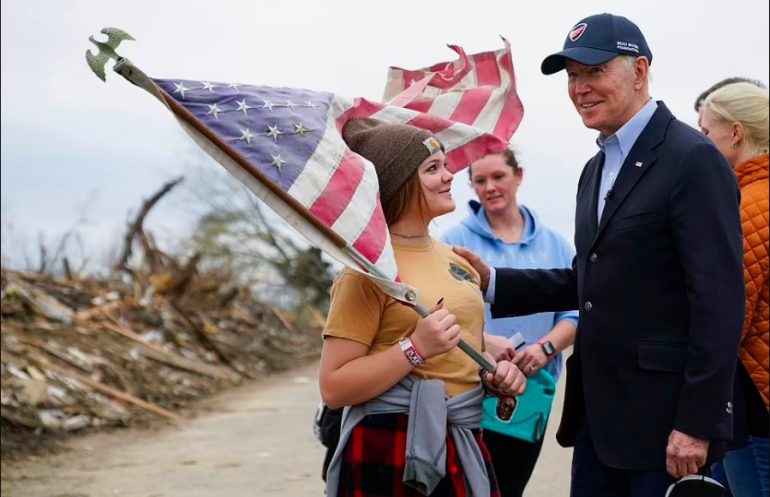 That guy is so creepy!

How did we get here, America?

How did a guy who is so shockingly completely oblivious that he makes women and children visibly uncomfortable in his presence is the President of the United States?

And we’ve got perhaps three more years to go…

If any time is right to pray, it’s now. Pray for everyone affected by the devastation from the tornado, but also pray as you have never prayed before that God kicks the ass of the Democrats in 2022 and 2024.