I was shopping at my local Wal-Mart this morning, and as I was checking out, I had a simple conversation with the check-out lady. I’d purchased a dozen roses for my wife, and as she scanned them she said, “And here are a dozen roses for your beautiful …” And then she hesitated as if having second thoughts about how to finish the sentence. I looked at her blankly, and she finally said, “For your beautiful … person.” I was perplexed. No one had ever said anything like that to me before. But perhaps I shouldn’t be surprised. In the past two years I’ve seen and heard some pretty bizarre stuff, and what’s worse, is that all the bizarre stuff is being passed off as normal and good and right.

I smiled and responded, “The roses are for my wife.”

The lady turned away and went back to scanning bar codes. And it made me wonder, What kind of world are we living in when people no longer know how to make chit-chat with a stranger?

I’m convinced that she wanted to say “For your beautiful wife.” But she stopped herself short, because she no longer knows the liberal-approved terminology. After all, I could be a homosexual, and buying the roses for another man. Although I can’t imagine what kind of man would want roses over a case of nine-millimeter ammo. The roses could also be for my secretary, oops, I can’t say that anymore. What is the latest approved term for secretary? Administrative assistant? I don’t even know anymore. I suppose they could even be for my pet dachshund, but please let’s not even visit that.

America has fallen so far from the grace of God that those roses could have been for anyone or anything they could’ve been for a man, a woman, a boy, a girl, or even a chimpanzee named Frodo.

I don’t fault the cashier for not knowing how to safely converse. But I do fault her for her lack of courage.

Does anyone else get frustrated when someone tells you Happy Holidays, or is just me? This is Christmas. So just say the word. Christmas. Say it again. Christmas. And now say it with an exclamation mark after it. Christmas! Now that wasn’t so hard was it?

I believe the goal of political correctness is to erase the final vestige of morality from the land. There is a verse in the Bible that goes like this: “Woe to those who call evil good and good evil, who put darkness for light and light for darkness, who put bitter for sweet and sweet for bitter.” (Isaiah 5:20)

So what is my point? My point is Americans no longer recognize right from wrong. But isn’t that to be expected from a society that has removed all sense of moral certitude from their lives? Many Americans don’t even understand what gender they are. It’s really quite simple. Pull down your pants or your dress. Look between your legs. If you have a Johnson, then you’re a man. If you don’t have a Johnson, then you’re a woman. When did all this become so difficult?

But many Americans love the lack of morality. It frees them from any sense of obligation or responsibility. There’s a line in one of my favorite movies “Groundhog Day.” Bill Murray is driving down the road with two drunk men he’s just met. As he drives, Bill asks the question, “What if there were no tomorrow?”

One of his drunk companions responds. “No tomorrow? That would mean there would be no consequences. There would be no hangovers. We could do whatever we wanted!” To which Bill Murray responds, “That’s true. We could do whatever we want.” And then he runs over a mailbox and then drives down the railroad tracks. And then Bill proclaims, “I’m not gonna live by their rules anymore!”

What I see today is a country that has turned its back on God. We don’t want to live by His rules anymore, simply because it’s more fun to have sex with anyone or anything willing to hold still. Many today see morality as a wet blanket holding them back from ungodly amounts of pleasure and personal gain.

And they are right. Morality does hold us back. It sets rules and limits in place that shouldn’t be violated. It keeps us from destroying our culture. All the aforementioned sins (yes, I know I’m not supposed to use the “S” word, but I figure if God can do it then so can I) carry an intrinsic price. Yes, you have the freedom to bang the blonde. But the price is too high. You’ll lose your wife and kids, your self-respect, along with any semblance of peace of mind.

Homosexuality is a sin. It means two people with the same parts are putting them in places they have no business being. But it has a price. And the price for sexual immorality is the same whether you’re with a man, a woman, or even an Aardvark on a bender.

What is the price? You forfeit your soul. You lose a civil society. When you practice unbridled freedom, then ironically, you lose your liberty. Because a republic can be maintained only by a moral people.

Here’s the problem with Bill Murray’s question: “What if there were no tomorrow?”

There is a tomorrow. And asking the question doesn’t change the reality of life. You can have a Johnson and pretend you’re a woman, but that doesn’t make it so. You can be married and pretend you’re single, but your wife will still divorce you and take half of all you think you own.

You have the freedom to choose an immoral life, but the payment isn’t worth it. Try to remember the reason most people fail is because they give up what they want most for what they want at the moment. We drink to numb the pain. We copulate with strangers for physical pleasure. But all those pleasures are gone the moment we finish or sober up.

May I speak frankly? The price of banging the blonde is your immortal soul. Because there is a tomorrow; in fact there’s an eternity of tomorrows. So go ahead, eat, drink and do Mary for tomorrow you die. And then … get ready to pay the price.

But I don’t want to end on a negative note. Now let’s talk about the reward for sexual purity. Men, stay true to your wife. Women, stay true to your husband. If you want freedom; if you want happiness; if you want the important things in life, then consider a life filled with sexual morality. After all, we’ve tried the reverse and it didn’t work. Try it God’s way now. Who knows, maybe He knows something that you and I don’t. 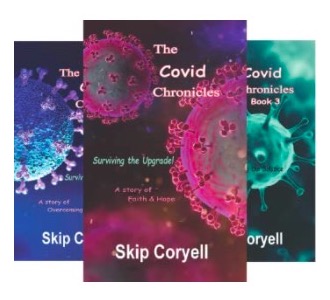 Check out Skip’s 3-book series, The Covid Chronicles. The first book was an adventure just to get it published.

Buy your copy on Amazon or get it straight from the publisher at White Feather Press.

Don’t forget to give Skip a 5-star Amazon review after you’ve read the series.

Skip Coryell is the author of 16 books, including “Civilian Combat: The Concealed Carry Book” and the post-apocalyptic adventure series “The Covid Chronicles” as well as “The God Virus.”