The Corporate Media in Australia is calling adverse reactions “rare” — but that’s not what the numbers show.

The government of Australia has been heavy-handed throughout the pandemic with lockdowns, restrictions, mandates, and quarantine in an effort to achieve the impossible goal of “COVID Zero.” Now, they’re going all-in on the “safe and effective” vaccines with more mandates.

While the government insists that people have a “choice” to be vaccinated or not, the “choice” means exclusions from everyday life — indoor dining, concert venues, theaters, travel, and even certain types of employment. (More on that below.)

The government of Australia is now pushing boosters, but they’re also doing something that many other governments refuse to do — admit that there are risks to vaccination.

They’re offering compensation to those who have suffered adverse reactions to the vaccine. Why is the government compensating individuals who are reacting to the vaccine instead of Big Pharma? Oh, right. It’s because these are all administered under “Emergency Use Authorization” and the vaccine manufacturers have a liability shield.

The 7News Australia anchor reported, “Doctors say that the benefits far outweigh the risks, but as the COVID vaccine rollout ramps up through the booster phase, there are a rare few who suffer severe side effects. The federal government is now offering compensation for anyone who becomes seriously ill after having their COVID shot.” (Emphasis added.)

There is a catch, however, which may leave many people without compensation — someone has to be in the hospital overnight in order to receive compensation.

Australia’s 7News profiled Matty John, a healthy man who suffered from severe pericarditis two days after receiving the Pfizer vaccine. John was off work for 10 weeks, but even though he was hospitalized twice for his adverse reaction, he doesn’t qualify for compensation because he wasn’t in the hospital overnight. 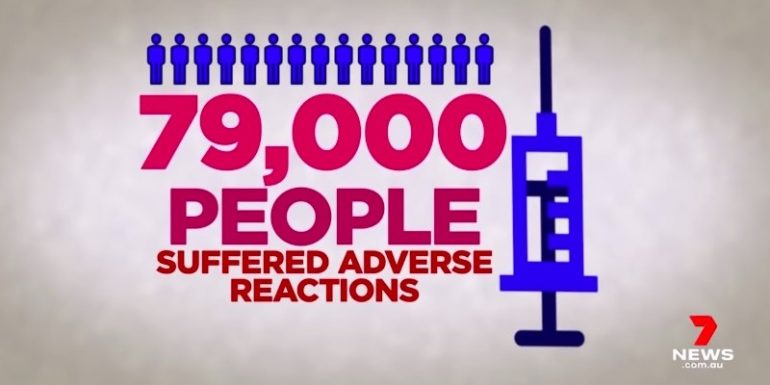 Granted, the population of Australia is around 25 million people, but not every child is (yet) eligible to receive the jab.

If you break down the numbers, it doesn’t look so great.

The Australian Department of Health provides weekly safety reports of the vaccines which include the number of adverse reactions that have been reported. The latest one was dated December 23 and showed that as of December 19, there were 94,047 reactions reported after vaccination. 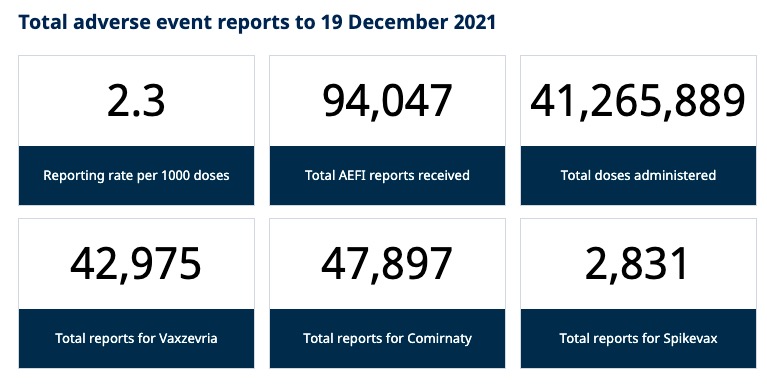 Do you recall hearing anywhere that there was a 1 in 435 chance of an adverse reaction to these jabs? No? Must’ve been an oversight.

To compare, the state of Florida has a population of approximately 22 million.

Now just imagine the hysteria that would occur if Governor Ron DeSantis mandated 3 shots of a vaccine when over 94,000 people had already suffered an adverse reaction. Joy Reid’s head would explode as she ranted about “Death Santis” wanting to kill the residents of his state.

Don’t forget that this is a virus that has disparate effects — for the vast majority of healthy, young people, it’s not life-threatening. Sure, it’s unpleasant and can make you feel like hell, but that’s not the same thing. If you’re older, obese, or have other co-morbidities like heart disease, diabetes, or COPD, then you should be a bit more concerned because your risk of severe illness and even death is much higher.

But let’s keep in mind as they push to jab all the kids that the rate of recovery is still better for an unvaccinated child than for a senior citizen with a booster.

The risk/benefit ratio of getting the shot is clearly different for various groups because they don’t have the same levels of risk. It would be nice if some of these “experts” that work as public health officials would acknowledge that.

The vaccines offer a measure of protection that appears to wane rather quickly as we see with the rise in cases now that the Omicron Variant has spread widely all over the world. The good news is that this variant is still presenting as a mild illness with lower hospitalization rates weeks after it was first detected.

And yet, governments everywhere are fixated on vaccination 2 years into this pandemic rather than on treatment, despite the vast majority of those at highest risk (in Western countries, at least) having received 2 doses of the vaccine and a booster.

As ClashDaily reported in December, Pfizer appears to have lied about the number of deaths and adverse reactions during clinical trials.

In many places, your rights are tied to your vaccination status. In Canada, you can’t travel by plane or train out of the country or even between provinces without proof of vaccination. That’s the kind of inter-state proof of vax mandate that Biden is mulling over.

In Western Australia, a new, more robust vaccine mandate for workers has come into effect.

From 12.01am January 1 all workers in sectors known as the ‘Group 1’ cohort such as ports, police, health, corrections, fire and emergency services, and some community services will need to be fully vaccinated to remain employed.

But a much larger cohort known as ‘Group 2’ will also now fall under the mandate and must have had at least one COVID-19 vaccine to keep working.

This group will be required to have been fully vaccinated by January 31.
Source: Western Austalia Today

Is that really a choice?