Initial reports of a lengthy phone call between the Presidents of the U.S. and Ukraine stated that it “did not go well” and Zelensky had to tell Biden to “calm down the messaging.”

Media coverage of Putin sending troops to the border of Ukraine has been apocalyptic, hair-on-fire rhetoric that is raising concerns that U.S. troops could be sent to ward off a possible Russian invasion into Ukraine.

This “wag the dog” attempt shouldn’t be a surprise since everything that Biden touches seems to turn to sh!t.

On Thursday, CNN’s Natasha Bertrand posted a tweet with screenshots of a report citing CNN’s correspondent in Ukraine whose source was a “senior Ukrainian official” that the phone call was a bit tense.

Bertrand included screenshots of the CNN report that had the details. 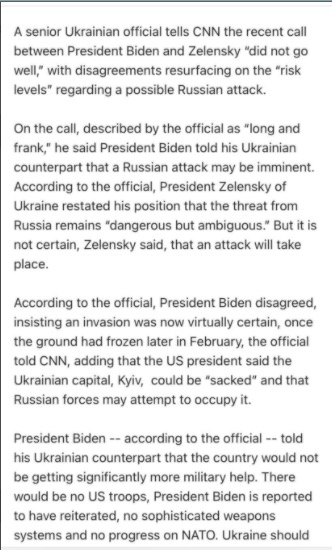 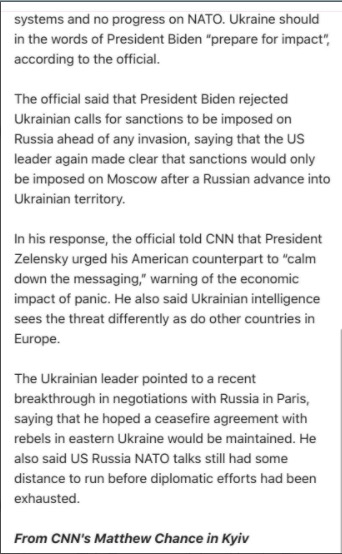 The report says that on the call, Zelensky told Biden the threat from Russia was “dangerous but ambiguous” and that an attack was not certain.

Biden disagreed and replied that a Russian invasion was “imminent” once the ground was frozen because the capital city of Kyiv could be “sacked” and that “Russian forces may attempt to occupy it.”

The President also told Zelensky that Ukrainians should “prepare for impact” because the U.S. wouldn’t be sending more military help in the form of U.S. troops, sophisticated weapons systems, and added that there was no progress on NATO. Biden also rejected Ukrainian calls for sanctions on Russia ahead of any invasion and reiterated that the U.S. would only impose them once Russian troops advanced into Ukrainian territory.

CNN also reported that Zelensky was urging Biden to “calm down the messaging” and warned of the economic impact of panic and said that Ukrainian intelligence sees the threat differently, pointing to negotiations with Russia that are being held in Paris.

Shortly after it was released, Bertrand deleted the tweet and CNN went into damage-control mode. 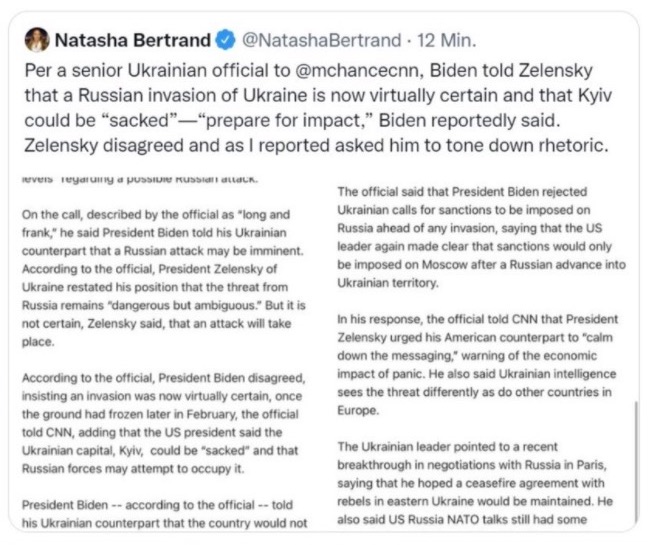 Just over an hour after Bertrand’s tweet, CNN’s Jim Sciutto says that none of that ever happened. 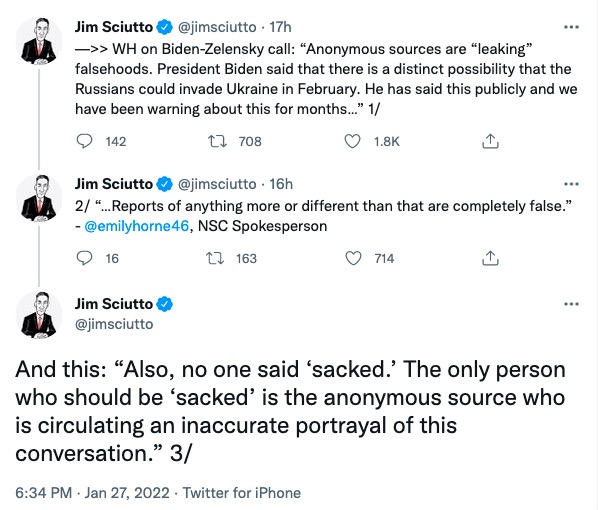 The White House and, apparently, Ukraine itself, are doing the same.

Jack Posobiec of Human Events was on it like a dog with a bone.

He posted a CNN report that CNN has now claimed has been debunked.

BREAKING: We have recovered the Ukraine call report that @JakeTapper and CNN just deleted

Please DO NOT RT this as they do not want anyone to see it! pic.twitter.com/vV67Jc1p7i

Posobiec was tweeting about the situation and gave a timeline.

Hi @NatashaBertrand! Why did you delete this? pic.twitter.com/rNKNCLhIZr

The American people deserve the truth

This is where we're at on the Ukraine call leak

We also see a tweet from Emily Horne, a Biden official, which is a brief denial, but does not include the the specific details of Sciuttio's tweet

That means the White House was working the phones to CNN https://t.co/6z8BEW3SBI

CNN’s Senior National Security Correspondent, Alexander Marquardt tweeted the initial report at 5:30 pm, then that the White House was “pushing back” on what the senior Ukrainian official told CNN just a half-hour later. It was a masterclass on how to walk back a report.

A spokesperson for Zelensky said that the reports citing a “senior Ukrainian official” are “completely false.”

Zelensky’s spokesperson about the call with Joe Biden: “Some reports regarding the content of the talks between Presidents Volodymyr Zelensky and Joe Biden have appeared on social media, citing the alleged ‘senior Ukrainian official’. These messages are completely false”. pic.twitter.com/Z3blRfCjw2

President Zelensky’s official Twitter account posted was a very different tone than that of the Western Media hyping the situation in Ukraine.

Had a long phone conversation with @POTUS. Discussed recent diplomatic efforts on de-escalation and agreed on joint actions for the future. Thanked President @JoeBiden for the ongoing military assistance. Possibilities for financial support to Ukraine were also discussed. pic.twitter.com/pAsQLYAuig

Now, President Zelensky is slamming the coverage of Ukraine in Western media.

Says they are giving the image there are tanks on the street and people fleeing, creating panic pic.twitter.com/NMfVOX1mXZ

The question here is… was it basic incompetence and CNN’s unreliable sources in Ukraine, panicked spin because Biden’s “their guy” in office, or pressure from the White House that caused CNN to change the report?

We know that the White House has successfully managed to alter CNN’s reporting in the past.

It’s all a matter of who you choose to believe — lying CNN, dishonest Biden who has been wrong on every foreign policy position for the last 40 years and desperately needs a win because he’s taking in the polls, or the President of Ukraine with the Russians sitting at the border that’s telling Biden to calm the eff down.