They don’t see the irony, do they?

Germany is trying to encourage vaccination and they’re doing it with — sheep.

According to Reuters, a German campaigner is hoping that “700 sheep forming the shape of a giant syringe will reach the hearts and minds of people hesitating to take a COVID-19 injection.”

“Sheep are popular with people and carry positive emotional connotations. So perhaps they can reach many people emotionally when logic and scientific reasoning don’t do the job,” the organiser of the campaign, Hanspeter Etzold, told Reuters.

Etzold works with shepherds, companies and animals to run team-building events in the northern German town of Schneverdingen.

“I have noticed how enthusiastically the sheep are received and that it simply reaches people deep inside, which is perhaps not possible rationally, with rational arguments,” he said.

The animals, which belong to shepherd Steffen Schmidt and his wife, followed pieces of bread spread on the ground to form the 100 metre long syringe shape as they were filmed by drone.
Source: Reuters

This guy seems to really believe that a video of sheep being herded to make the shape of a syringe will convince people to follow government diktats.

I was kinda hoping he was just trolling people for the LOLz.

Leading sheep to make the shape of a giant syringe in order to convince the unvaccinated to follow the rest of the sheeple and get the jab.

It’s perfect in its irony.

I’d love to see an interview with someone who has held out for a year and suddenly decided to get the jab because of the sheep video. Wouldn’t you?

What would they say?

“Yeah, I was concerned that these new vaccines don’t have long-term data and since I already had COVID I didn’t think I needed the vaccine, but now that I saw 700 sheep make the shape of a 100-foot long syringe in a staged stunt to emotionally manipulate me and I’m convinced! I’m going to get the vaccine right now!” 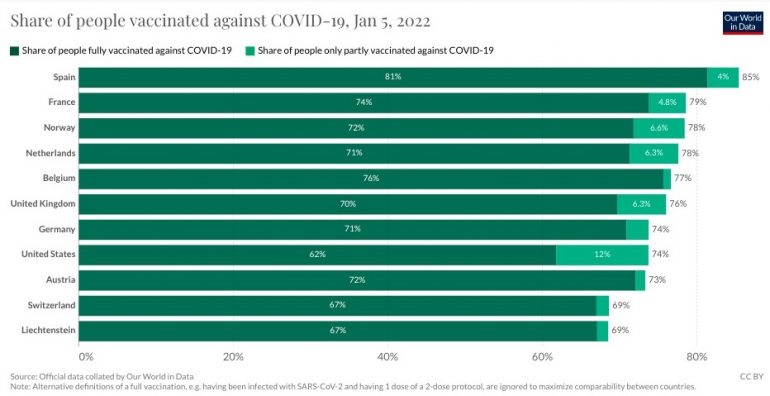 So, nearly 3/4 of everyone age 5 and up have been vaxxed but that’s simply not good enough, and it doesn’t even consider natural immunity from prior infection despite the illness spreading globally for basically two years now.

This is absolutely psychotic!

Throughout the pandemic, the German government has been pushing very hard for universal vaccination.

Once the Omicron Variant came on the scene, Germany created a two-tier society where the unvaxxed are not permitted to participate in certain activities like indoor dining, going to bars, non-essential shops, or entertainment venues.

Now-former Chancellor Angela Merkel said that there was a possibility of a national vaccine mandate for all adults as early as February.

With a narrow majority, the German Ethical Council recently approved mandatory vaccination for all adults age 18 and up paving the way for the government to make life even more difficult for the unvaxxed. The council proposed that communication surrounding the mandated vaccines are “target-group-specific, culturally sensitive, multilingual, and easy-to-understand information” and put in the caveat that force should not be used. The council’s recommendations, however, are not binding.

But if mandating vaccines the heavy hand of government shunning the unvaxxed from polite society doesn’t work now that it’s pretty clear that both the vaxxed and unvaxxed are getting the ‘Rona in record numbers, maybe they could have the sheep spell out “We’re all in this together” in German. That’ll do the trick.