It’s unclear if she got the virus in the free state of Florida or in her home state of New York.

On Sunday night, a statement posted to Representative Alexandria Ocasio-Cortez’s Congressional Twitter account announced that she had tested positive for the virus.

It states, “Representative Ocasio-Cortez has received a positive test result for COVID-19. She is experiencing symptoms and recovering at home. The Congresswoman received her booster shot this Fall, and encourages everyone to get their booster and follow all CDC guidance.” 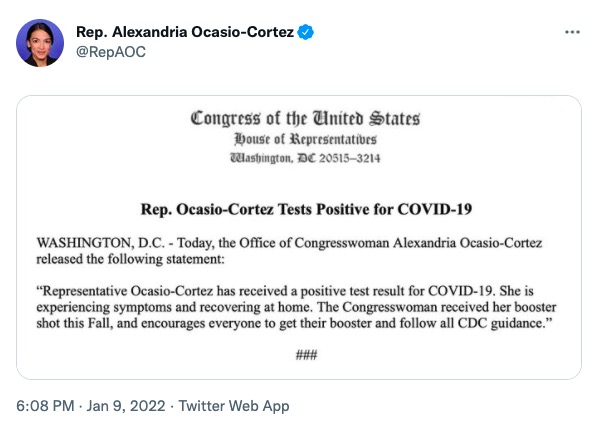 Unfortunately, this happened just after she returned from a trip to Florida which will no doubt be a great excuse for AOC to tear into the Sunshine State… again.

But let’s be honest — it was only a matter of time until the Representative of New York’s 14th Congressional District contracted the ‘Rona.

After all, she’s living in NYC where COVID cases are higher now than when the former Governor Andrew Cuomo was giving his daily Emmy Award-winning pressers and diverting state resources to write a book on pandemic leadership.

She also travels quite a bit and meets with a number of people. Heck, she’s available for the opening of a letter if a camera is there!

Video and photos of her on her vacation show her not really doing much with that whole social distancing thing — she was photographed hugging a drag queen and kissing Billy Porter.

Despite AOC’s hardline statements on masks and distancing, she hasn’t perfectly followed the CDC guidance herself, which you’d think she would if COVID was as life-threatening a disease as Democrats say it is.

The 32-year old AOC is vaccinated and boosted, lectures people on taking the virus seriously, and wears her mask all the time — when cameras are around, that is.

She also doesn’t need to wear a mask when she’s with a “sophisticated, vaccinated crowd” at the Met Gala accompanied by a fashion designer and the immigrant from Canada’s billionaire boyfriend.

It must be because the airborne respiratory virus can tell who is sophisticated and who isn’t, just like it can tell when you’re standing up in a restaurant as opposed to sitting down and eating.

But she’s getting lambasted online because she — like many on the left — liked to blame people for contracting an airborne respiratory virus as though it was their fault. Sometimes, “virus gonna virus” because precautions aren’t 100% effective 100% of the time.

Another Democrat caught in Florida with no mask!! #Hypocrite #AOC #Florida pic.twitter.com/majUWnE0fE

Her bizarre reaction to conservative commentator Steve Cortes’s criticism of her maskless vacation in Florida is now being used against her — she’s infected because the virus “just wants to date her.”

Just to recap: she’s triple vaxxed and lectures others about wearing a mask in public. Presumably, she did the “right” things.

Not that wearing a mask protects you from contracting the virus, despite the current talking points of the experts.

If you recall, masks were supposed to prevent asymptomatic people from spreading the virus to other people unwittingly. Of course, that was after Fauci flip-flopped on his original position on masks where it “might prevent a droplet or two” but won’t do much to stop the spread of the disease.

Early in the pandemic, the now-disgraced former-Governor Cuomo said, “your mask protects me, and my mask protects you.” It was the “we’re all in this together” sentiment that Democrats clearly didn’t believe because they kept violating their own COVID rules.

Besides, we now know that the virus is airborne and not just spread through droplets making universal masking a practice that makes it look like we’re doing something without really doing anything.

As Senator Rand Paul (R-KY) coined it masking up is, “COVID theater” to keep people from panicking. Study after study shows that masks don’t significantly stop the spread of the virus. The result of pushing the largely pointless masking of healthy people hasn’t really done much with regard to mitigation — but God help you if you say that on social media!

AOC is being blasted because the left has made a virus political. They’ve vilified people who contract it — right up until it’s someone they know and like, and then it becomes just something that happens.

Maybe if you do everything “right” and you still get the virus… maybe those mitigation measures don’t work as well as you thought they did, and perhaps you shouldn’t be browbeating people who don’t do those things.

Heaven forbid you suggest that taking vitamins and losing weight are ways to reduce the risk of severe illness from COVID and improver your overall health when we know that Vitamin D deficiency and obesity both contribute to hospitalizations and death. You’ll be vilified. But encourage people to wear masks that don’t really do much? That’s encouraged, of course.

Using what I found on the interwebz of AOC’s height (5’6″) and weight (143 lbs), her risk of hospitalization is 0.7%. It looks like she’s going to be just fine. She’ll be back lecturing red states about the need for mandates and lockdowns in no time.