So, we’re coming down to crunch time for the Republican primaries. Texas is about to demonstrate, one way or the other, that elections have consequences at the State level, too.

It wasn’t so long ago that Virginia showed the nation what a difference one election can make. They went from being deep-blue (thanks in no small part to some big spenders like Bloomberg and Planned Parenthood) to having some royally PO’d parents throw those goons overboard and start cleaning house with Youngkin.

Robert Francis O’Rourke thinks he can flip that same script on Texas… and he thinks Gov. Abbott is carrying enough baggage around with him that he can pull it off. You know that with Texas such a big prize in the eyes of the Left, they will be throwing truckloads of out-of-state money his way in an effort to drag his skinny butt over the finish line, and Big Tech will be sure to do their bit in silencing his critics.

He’s right about Abbott’s baggage. Abbott may have a pretty good lead right now, but he’s made some missteps and would be vulnerable over them. It’s a fight he might be able to win, but even Ted Cruz had to gut it out against O’Rourke, winning 50.9% in a statewide race.

There’s another man on the ticket who, in our opinion would be a much greater threat to Francis than Abbott is. We already know he’s a threat to Abbott in this race, despite Abbott having the advantage of a war chest nearly bursting at the seams.
Here’s a Statewide poll taken just a few weeks ago, showing that Allen West outperforms Abbott in a head-to-head against Beto. 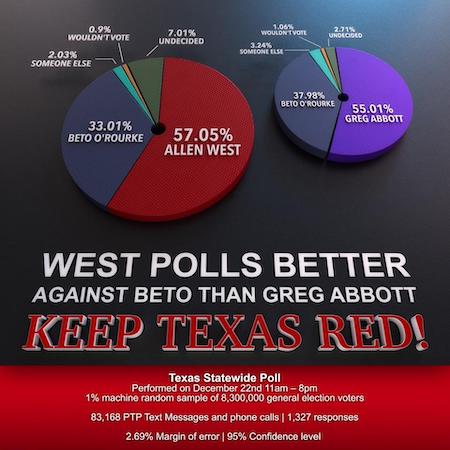 Here are a few reasons ClashDaily has chosen to endorse Allen West.

2) Freedom. Ted Nugent supported Abbott in the last election but has thrown his support behind West this time. The word freedom sums it up, but he expands on that answer here.

4) He LOVES both America and Texas. At a time when it’s fashionable to whine about what a horribly evil place America is, he is pushing back against that narrative — hard. He’s not just ‘ok’ with America, he is unashamedly proud to be an American. WATCH: LTC Allen West’s Inspiring Message About America Will Make Patriots Scream Like A Bald Eagle

5) He gives a throat-punch to race-baiters. His own biography stops racial grievance-hustlers cold. His life story of overcoming adversity proves their gospel of envy is a house of cards built on lies… and proves the American Dream is not dead by a long shot.

6) West is not afraid to call out Abbott’s failure on the power grid issue. Abbott made a promise about the power grid not failing again. Abbott had no power to deliver on that promise and he either knew it or ought to have known it. In either instance, he has no excuse to fall back on. That’s a problem of leadership. Also, West has connected the dots between Abbott’s leadership failures on this issue and the financial support Abbott got from the CEO of Energy Transfer. Beto has already started jackhammering Abbott over this issue. Running Allen West for Governor takes one of Beto’s more compelling arguments off the table.

7) Gun Rights. Beto is a notorious Gun-grabber and Allen West…? Heh. He’s the guy in this photo: 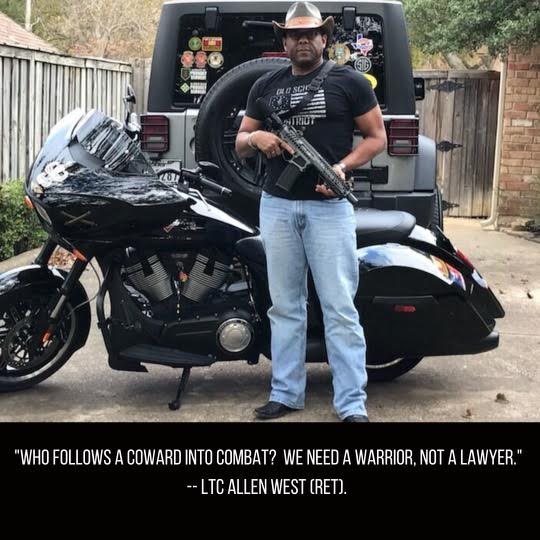 8) His ‘Never Surrender‘ attitude. He’ll fight to defend the interests of America and Texas with the same kind of ferocity he used to defend his wrongly-maligned wife.

9) The Constitution. Whether it’s the Constitutional rights of Texans that were wrongly trampled by a certain governor during the Chinavirus, or laying out a plan to defend Texas from the Cartels, his answers have been consistently and firmly rooted in that Supreme Law of the land. ALLEN WEST: Pledges To Defend Texas From Cartel ‘Invasion’ Using SPECIFIC Constitutional Powers

10) The Border. Beto wants it open. Abbott wants to file lawsuits. West wants to call it an invasion and invoke Constitutional powers to defend our sovereignty. These men are not the same.

As for reasons to support him, we could add dozens more… a quick scan through some of the other articles we’ve written about his work would speak for themselves. Who he is as a man, who he is as a patriot, his example of faith, his courage, his optimism… and so on.

But if even God could make His point with ten examples, well, we can stop there too.