Longtime readers of ClashDaily may remember the name Viva Frei from a few other major stories we’ve covered.

We first mentioned him when he looked under the hood of that Time Magazine article about the election ‘being fortified’ for Biden. His name came up again during the Rittenhouse trial. And he was one of the live-and-in-person live streamers getting the whole story that so many other reporters were keen to overlook.

He’s also a lawyer by trade, so his insights into how the government has been handling the Trucker Convoy carry more weight than your typical live-streamer on YouTube.

Needless to say, after seeing the real people on the street bear zero resemblance to the straw man narrative that the media and the goverment have been ginning up, he has gone from annoyed to upset, to fully outraged over what has happened since the Trucks first flowed into the capitol.

This tweet captures how well he’s been taking Trudeau’s crackdowns.

As for Trudeau himself? This sums it up nicely. 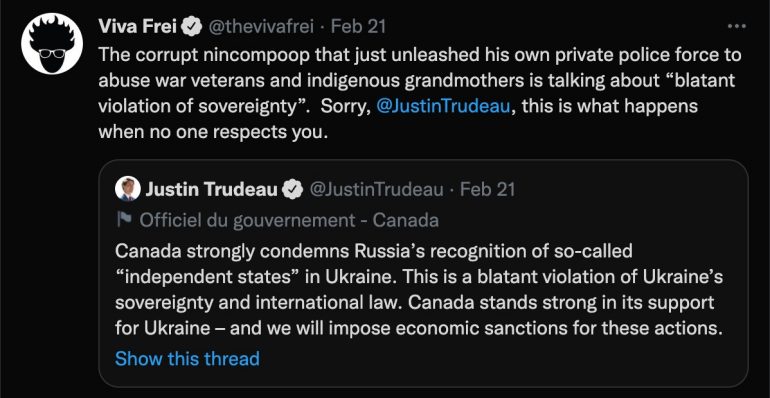 Now that we’ve established what team Viva plays for and can’t be accused of hiding our biases, let’s see what this Canadian lawyer had to say about those frozen bank accounts.

It’s so obvious that it’s hiding in plain sight.

Remember when a whole bunch of roadblocks were thrown up in front of the convoy’s crowdfunding efforts? They had to jump through all kinds of regulatory hoops in order to qualify as a registered charity.

They did exactly that.

By letting them register it as a charity, the federal government itself has signaled to ordinary citizens that this organization was on the up-and-up.

Now those same citizens that took the government imprimatur of this charity’s validity at face value are branded with all the same labels that Democrats are throwing at Jan 6 people.

Does that seem like a dirty bait and switch to you?

It does to Viva.

The Freedom 2022 Human Rights and Freedoms (i.e. the #FreedomConvoy2022 Truckers Convoy) is a federally incorporated not-for-profit. Meaning, federal government approved its status. To then go after any donors is nothing shy of the most insidious entrapment conceivable. #OhCanada pic.twitter.com/4pfVXojlkh

It will be interesting to see how the government squares that circle in court, won’t it?

But by then will it really matter, if Blackface Hitler has already achieved his goal of crushing lawful dissent?