Two of the leaders of the Freedom Convoy have been taken into custody by Ottawa police.

The Ottawa Police Department has taken action to end the protest after sending out flyers on Wednesday telling truckers who are continuing the protest to leave the downtown core immediately.

This comes just two days after progressive Police Chief Peter Sloly resigned over his handling of the protest.

Ottawa Police warned that children will be “removed” from the protest area in conjunction with the Children’s Aid Society — Canada’s version of Child Protective Services.

The Ottawa Police Service, in collaboration with The Children’s Aid Society of Ottawa, will work to ensure the safety and wellbeing of children and youth at the current demonstration in the downtown core.

Ottawa By-Law enforcement also warned truckers that their animals will be taken and held for 8 days at owners’ expense, then either adopted or euthanized if “arrangements are not made.”

That’s quite the threat now that the government has the ability to freeze all access to funds without a warrant under the “Emergencies Act” that is a 1988 retread of the War Measures Act.

Earlier today, Police were showing that they’re not fooling around. Fencing is being built around Parliament. The “House of Commons” is no longer accessible to the Canadian people.

Fencing is being installed at Parliament Hill, with some entry points onto the grounds having been completely blocked off.

A fence appears to be being built as large numbers of police move through the area where the freedom protest in Ottawa continues.

A “secure zone” has been set up around the protest area that encompasses roughly a 1.8-mile area in downtown Ottawa in order to prevent protesters from flooding the protest area as they have done for three weekends in a row.

Ottawa Police say almost 100 checkpoints will be set up in an area from Bronson Avenue to the Rideau Canal and Highway 417 to Parliament Hill (Wellington Street). 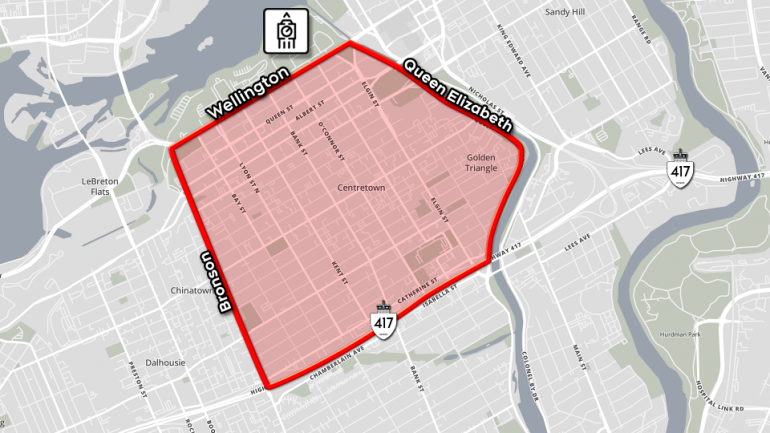 Ottawa police say anyone can enter the secured area if you fall under an exemption of the Emergency Management and Civil Protection Act.

Reasons to enter the secured area include:

– Reside, work or are moving through that area for reasons other than to participate in or facilitate the assembly;
– Are acting with the permission of a peace officer or the Minister of Public Safety and Emergency Preparedness;
– Are a peace officer; or
– Are an employee or agent of the government of Canada or a province who is acting in the execution of their duties
Source: CTV News

And if you’re wondering if you’ll have to “show your papers” at “Checkpoint Trudeau” to the armed police guards, the answer to that is… yes.

In a statement, the Ottawa Police said, “You will be required to show proof of exemption for your travel to the Secured Area.” This can come in the form of a driver’s license, work identification, or a shipping manifest to show that you require access to the area.

Andrew Lawton, a journalist with True North explains how bizarre it is that there is a “No-Go Zone” that encompasses pretty much the entire downtown core of Ottawa.

The “secured area” is pretty much the entirety of downtown Ottawa. pic.twitter.com/32F0LAwzIz

Highway offramps to downtown are closed. The City of Ottawa provided a map that is “subject to change.”

As announced by Ottawa Police today (Feb 17), here is the map of the Secured Area and road closures. https://t.co/2blTs8QDhN pic.twitter.com/FwAGslcA7o

A big snowstorm is expected in Ottawa on Thursday night. As the snow started falling, the police action began.

Two of the most prominent organizers of the nearly 3-week long protest have been arrested.

BREAKING: Freedom Convoy protest organizer Chris Barber got arrested in Ottawa as he was walking down the street. https://t.co/oFSoJ2ez4I pic.twitter.com/6Itq8ypRKR

Here is Chris Barber speaking to Tucker Carlson on January 31:

Freedom Convoy trucker Chris Barber tells Tucker Carlson that a few politicians from each party owe the truckers an apology for having “said some things that are completely uncalled for.” pic.twitter.com/PhLB7IHppG

Tamara Lich, the Métis mother and grandmother who was one of the key organizers and promoters of the protest, was also arrested later in the evening.

Tamara Lich has been arrested, but we will continue to #holdtheline pic.twitter.com/GaPZdsrhVe

Earlier on Wednesday, Lich posted a video saying that it seemed inevitable that she would be arrested and resigned herself to that.

She has always said that she would “Hold The Line.”

Meanwhile, things on the streets of Ottawa are descending into chaos…

A conflict has broken out among opposing factions at the Ottawa #freedomconvoy22 protest.

They have begun to engage each other in a vicious… snowball fight. pic.twitter.com/1wSFgW0ltA

Those damned Canadian insurrectionists and their “mostly peaceful” snowball fights!

Seriously, is there anything more Canadian than this?

A snowball fight has broken out at the freedom protest in Ottawa.

Even with the leaders getting arrested, it can’t seem to stifle the joy in that crowd.

Protesters remain defiant and are committed to “Hold The Line.”

Arresting peaceful protesters isn’t going to be a good look for Fürher Trudeau.