Big Pharma “pay us hundreds of millions of dollars a year to hire and keep the reviewers to approve their products,” says the FDA executive.

Project Veritas published two videos of FDA employee, Christopher Cole, speaking rather openly about conflicts of interest and overspending within the agency. He also explained why it’s difficult for those within the FDA to speak out against the abuses.

You can watch Part 1 here where Cole talks about how Biden wants to “innoculate everyone”, the approval of annual COVID shots, and that he believes that the vaccine will be approved for toddlers despite a lack of long-term safety data.

EXPOSE FDA: Annual COVID Shots Are Coming And So Is The Jab For Toddlers Says FDA Exec (VIDEO)

After Part 1 of “Expose FDA” by Project Veritas was released, a spokesperson for the FDA issued a statement to the investigative organization saying, “The person purportedly in the video does not work on vaccine matters and does not represent the views of the FDA.”

However, according to his LinkedIn profile, Christopher Cole is listed as the “Executive Officer, Medical Countermeasures Initiative at U.S. Food and Drug Administration.” 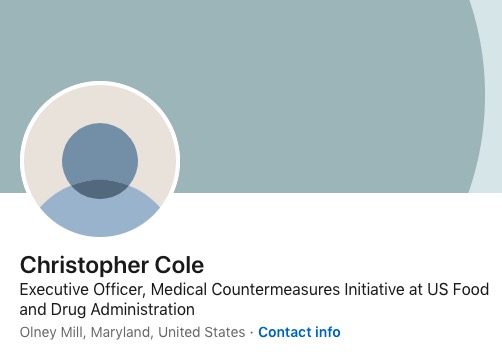 This statement from the FDA contradicts what was said on a phone call between Christopher Cole and James O’Keefe, founder of Project Veritas.

You can hear Cole try to backpedal what he said on the phone with O’Keefe. He claims that the investigative report “seems like a hack job” and accuses PV of “bugging” him.

In the second video, Cole goes into the funding model at the FDA that creates a dependency on the industries it is supposed to regulate. Cole says that user fees charged by the FDA are used to hire more reviewers to speed up the approval process which increases the chance of approval thereby allowing Big Pharma to make more money.

He said that almost a billion dollars a year go into the FDA’s $5.5 billion budget from the companies that the FDA regulates.

Cole adds that user fees are added for “non-payroll expenses” and the FDA has become “overzealous” in charging them. He also says that the imposition of user fees has become “excessive”, but the FDA needs them to cover other costs.

“A long time ago, Congress approved user fees for [the] FDA. Basically, we charge the industry millions of dollars in order to hire more drug reviewers and vaccine reviewers, which will speed up the approval process, so they make more money,” Cole says in the hidden camera footage.

He then reveals that the FDA tones down the impact that these user fees have on the agency’s operations because, “they’re dependent on the drug companies, and the vaccine companies and these other companies for their agency to operate.”

The incendiary footage, which features Cole talking about how the additional money the FDA brings in “gets banked” to be spent on “whatever you can, whether it’s right or wrong,’’ also features Cole discussing reasons why it’s difficult for anyone in government to speak out about practices he sees as “probably excessive.”

“I don’t think there’s enough people saying they’re, like, ‘Look, that’s fine, but that’s not right. So, we’re not going to charge that.’ You don’t want to be that person. You’re not going to have a long shelf life in the agency if you’re always that person,” Cole said.

“There’s not an incentive to speak out in government, surprisingly. You would think there would be, but there’s not. It’s better just to just not say anything and just ignore it. The whistleblower, well, it’s high-profile whistleblower statutes and everything, that’s kind of ridiculous,” Cole said before adding “it’s better to just stay quiet and accept.”
Source: Project Veritas

Cole said that whistleblowers in government are rare because it’s just not worth it — speaking out means that you’ll be flagged for “rocking the boat.”

Cole did say that most of the approvals are based on data, but if they aren’t and there are adverse reactions, then the approval is pulled and the drug is taken off the market. When the undercover journalist asks, “Does that happen?” Cole responds, “It’s happened. It happens a lot.”

Blaze TV host Sara Gonzalez made some interesting points about what the “experts” had said was “safe and effective” in the past.

Remember what the “experts” used to say was also proven to be “safe and effective.” pic.twitter.com/5wpjrzkXqf

Nearly 90% of all FDA recalls are because it’s either:

-Class I: a dangerous or defective product that could cause severe health complications, or even death

-Class II: a product with the potential to cause a temporary or serious health problem

Kinda makes you think, doesn’t it?

It would appear that a trusted government agency has been exposed as being financially dependent on the very industries that it is supposed to regulate.

How can Americans trust what the FDA says is true anymore?

These medical experts have beclowned themselves over the past two years, and that’s such a dangerous thing.

All they had to do was admit that they were wrong and that they’d learned as more data came in, but they just couldn’t do that, could they?