What Putin is saying about Ukraine’s President Zalinsky is almost indistinguishable from the political cheap shots we see from any of the media sock puppets criticizing their political enemies on the left.

In a political landscape where elections have consequences, but ideas don’t, media and Big Tech have been the defacto AV department of the DNC’s agenda. At this point, the political, financial, and power agendas have become so entangled, it would be difficult to distinguish who is ultimately serving whom.

When it became clear that the Access Hollywood tape and Avenatti weren’t doing the necessary damage to Trump, and that Russian Collusion accusations were losing traction, the NYTimes had an editor’s meeting in which it explained they were shifting the basis of the paper’s reporting. For the rest of Trump’s term in office, so much as possible, every story touching on Trump would be filtered through the lens of ‘race’. ClashDaily reported on that here:LEAKED: New York Times Staff Meeting Reveals The NEW Plan On How To Cover President Trump

It’s no surprise that the Very Fine People hoax is so widely reported as fact… the left WANTS you to believe Trump is a bigot. This is despite Jim Acosta himself — who posed the question to Trump in the first place — admitting in a contemporary tweet that Trump explicitly denounced bigots as evil.

But Joe Biden STILL used their big ‘very fine people’ lie as the cornerstone of his election campaign, because nothing is worse in America than being branded a bigot.

With the media left, it doesn’t matter if the allegation is TRUE, it only matters if the lie can advance your cause and give you political power.

If you can discredit your political enemy, you can claim the moral high ground (see: Jan 6, or bigotry, etc), and you don’t have to worry about defending your own ideas. You can just attack the enemy.

The left is so confident in the destructive power of that tactic that they’ve been caught red-handed faking racism… most notably with the Lincoln Project’s embarrassing failure with the Tiki Torch ‘Youngkin Supporters’ who were all connected to the campaign of Youngkin’s Democrat opponent.

Look how casual the media has become in slandering people with the tag ‘bigot’. Nick Sandmann won a defamation case over it. Kyle Rittenhouse would have a strong case, if he ever decides to pursue it. Everybody to the Right of Bernie Sanders, these days, stands a good chance of being denounced as ‘fascist’ or ‘NAZI’.

That tactic was used so endlessly, it became the subject of a meme. 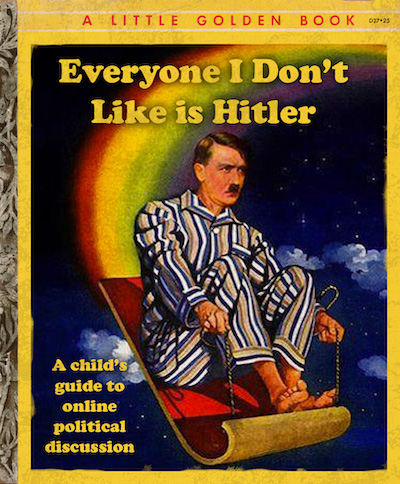 It evolved to acknowledge some other variations on the theme. 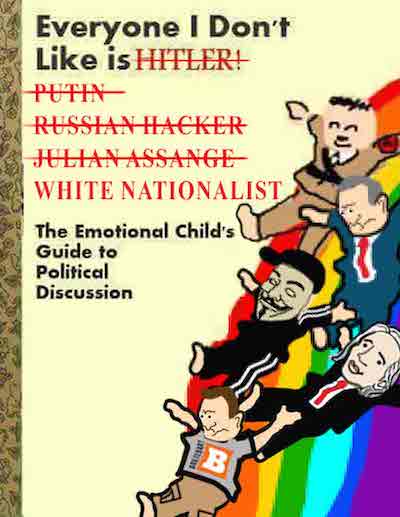 As a former KGB officer, Putin was familiar with such smear tactics and is more than happy to adapt the Democrat’s version of it to his own purposes in his standoff with Ukraine.

Does this rhetoric sound familiar?

As tensions run high in the war-torn Donbass region, Putin remarked that Ukrainian President Volodymyr Zelensky had been sucked into the orbit of the “Nazis” who had been pulling officials off the path of seeking a diplomatic resolution to the conflict.

Speaking to journalists at his annual end-of-year press conference on Thursday, the Russian leader said that “instead of responding to his people’s request for peace … President Zelensky came to power and, rather than fulfilling them, he, like his predecessors, fell under the influence of radical elements – as they say in Ukraine, Nazis.” —RT

It puts those media sock puppets in a difficult position. Do they call out as outlandish the tactic of calling someone a NAZI (etc) with zero actual evidence?

Putin is the bad guy in this story and they want to take away his moral high ground of being some kind of an anti-Nazi crusader fighting a just cause of removing an *ahem* ‘threat to Democracy’ by kicking a fascist to the curb.

But we all know that’s just a political power-grab. Putin would like nothing better than a friendly puppet calling the shots in Ukraine. Calling their current Head of State a Nazi makes him out to be anti-oppression… just like the media’s good friend ‘Antifa’ have claimed to be while leaving journalists with serious head trauma for reporting the ‘wrong’ story.

If they say that calling someone a NAZI/fascist/white supremacist is not the same as someone actually BEING one, that undercuts the left’s main narrative right now as they use allegations of ‘systematic racism’ as the excuse to rip up the current system and replace it with a dystopian nightmare.

If they told the truth, their whole house of cards would come crashing down.