For a guy who just budgeted $2.6 Billion of your tax dollars to promote global ‘gender equity’, this is a pretty big step in the wrong direction, and it is a direct result of his own incompetence.

Elections, Barack Obama liked to crow, have consequences. But the fact of the matter those consequences are not always good.

Biden’s first-year has been characterized by ineptitude and ideology

For example, with Biden sworn into the White House (leaving aside whatever might be said in defense or criticism of the circumstances thereof), there were real-world consequences.

We saw it domestically with heavy-handed authoritarian COVID policies, race essentialism permeating our various organs of government, energy independence, debt, and inflation — among other issues.

We have seen it internationally in timid leadership and bumbling negotiation where our ‘experts’ seem to believe that appeasement and bribing our global counterparts to show good behavior is somehow an effective strategy to promote national interests.

This is nothing more than a continuation of disastrous ‘America Last’ policies uncovered in reporting on the Cassandra Project during the Obama years in which we gave away the store to Iran, hurt our national interests, and enabled Hezbollah to grow, unchecked, into a real player among global criminal cartels.

Mr. Soul of the Nation isn’t doing much better. Their woke ideology caused Blinken to humiliate America in their first meeting with China. In Nigeria, Blinken caused something of a diplomatic crisis on his very first visit and followed that up by de-listing a country in which 3,400 Christians had been murdered in a year by extremists from the religious freedoms ‘Country of Particular Concern’ status.

Then there was Afghanistan, in which a 65-page Senate report laid the blame for Afghanistan’s failures squarely at the feet of Joe Biden.

One section of the document we brought attention to in our reporting of that story catches the main idea. 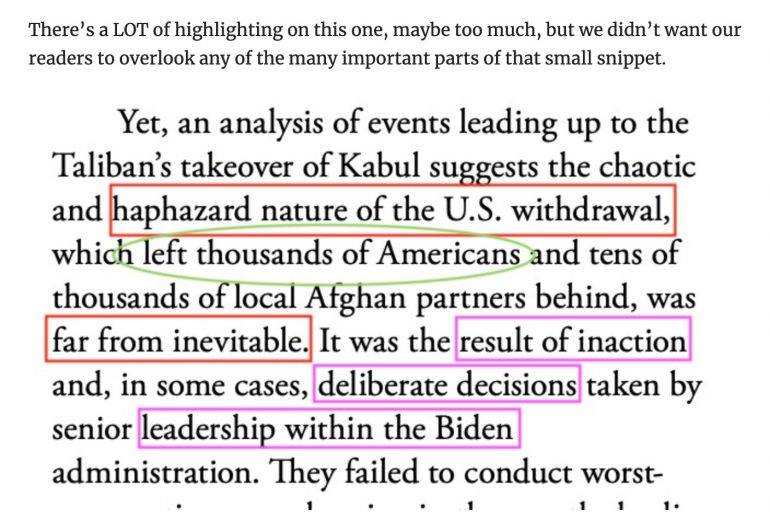 That ineptitude and ideology has real-world victims

In this case, the victims are school-age girls in Afghanistan.

The Taliban have reversed a decision to allow Afghan girls to return to high schools, saying a ruling is still to be made on the uniforms they must wear.

Schools were set to open nationwide after months of restrictions since the Taliban seized power in August.

This chaotic and last-minute policy reversal makes clear the divisions within the group – and underlines how out of touch with the aspirations of modern Afghan society parts of the leadership are.

Activist Mahouba Seraj, founder of the Afghan Women’s Network, was bemused by the U-turn.

“The excuse they gave was ‘you don’t have the proper hijab on’. There was no ruling, they just decided this morning that the hijab was not proper, for whatever reason,” she told the BBC.

Remember this story from just a couple of weeks ago?

The funds will be part of his fiscal 2023 budget request to Congress and will double the amount requested for gender programs last year.

“On this day and every day, let us recognize that all of us have a better future when women and girls can reach their full potential — and together, let’s renew our efforts to advance dignity, equality, and limitless possibilities for all,” Biden said in a statement.

The president said International Women’s Day is a time to recognize the achievements of women and girls, celebrate progress, and recommit to work that needs to be done.

“Ensuring that every woman and girl has that chance isn’t just the right thing to do — it’s also a strategic imperative that advances the prosperity, stability, and security of our nation and the world. Yet too often, in too many places, women and girls face obstacles that limit their possibilities and undermine their participation in economic, political, and social life,” Biden said. —TheHill [emphasis added]

The direct consequences of the personal leadership failures of Joe Biden in Afghanistan have already done more to move the world further from the kind of ‘inclusive’ world.

If Biden has made bad decisions that have led to a chain of events resulting in Afghani girls being denied education, his very own words condemn him.

If Afghani girls are denied education, then Joe Biden himself has made the world a worse place, with a worse future, has set back the dignity, equality and possibilities of all.

Furthermore, by his own logic, the Let’s Go Brandon administration has set us all back strategically in terms of prosperity, stability, security, both domestically and globally.