What began as a meaningless display of social media slactivism ended as a display of this Teacher Union leader’s absolute incompetence.

And we’re happy to revel in it.

Why? Because this is the same chick who pressured Biden’s government to keep kids in schools wearing masks and eating lunch outside in the middle of winter.

Not wanting to miss out on the Ukraine bandwagon, Weingarten’s AFL-CIO had signs made. A lot of them: 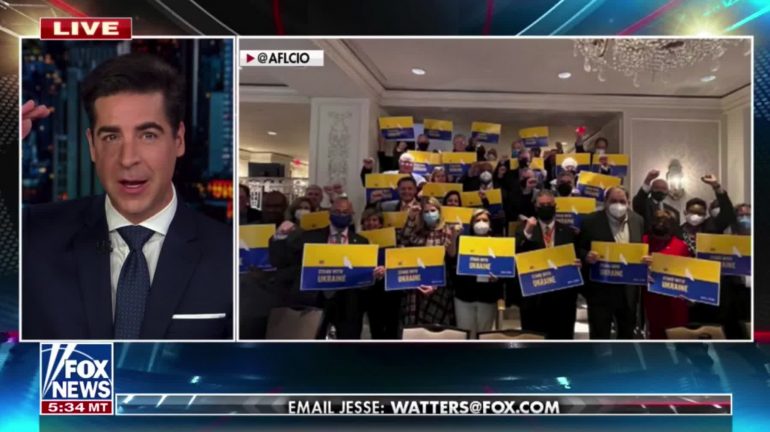 Can you spot what’s wrong with the sign she’s holding? 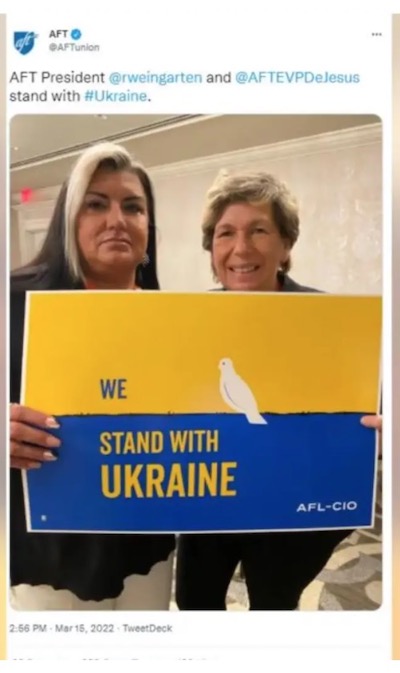 They messed up on the flag.

There are several explanations for the meaning of the colors on the flag. Here’s one:

The blue and the yellow of Ukraine’s flag represent the country’s role as Europe’s breadbasket. Blue denotes the skies over the vast land, while yellow stands for the grain growing in the huge wheatfields beneath. —Flag Institute

With that in mind, look at her photo again. Does public school no longer teach students that the sky is above the ground?

She came to a fork in the road. She could have just accepted her mistake, or even show herself to be the bigger person by laughing at it.

She tried to fix it.

That did NOT go so well.

The @AFLCIO has now deleted their photoshopped “stand with Ukraine” photo.

Join me on a journey.

Get dragged for upside down Ukrainian flags

Remember when Don Lemon had those guests on mocking Trump as ignorant, and being unable to ‘find Ukraine on a map if it had the letter U and the picture of an actual crane’ on it? And remember how he mocked his supporters with a (badly done Southern accent, no less) as the ‘credulous boomer demo’ for thinking ‘Trump is the smart one and y’all elitists are duuumb’? (The guests were Rick Wilson from the disgraced and discredited Lincoln Project and Wajahat Ali who writes for the left-wing rag Daily Beast. Ali was very awkwardly trying to fit into the impromptu ‘comedy’ session.)

Remembering the context of this conversation is Ukraine, we’d like to draw particular attention to this part of the clip:

Wajahat Ali: ‘You elitists with your geography and your maps and your spelling…’

Wajahat Ali: ‘…yeah, your reading, you know, your geography, knowin’ other countries, sipping your latte…’

Rick Wilson [still with accent]: ‘…all those lines on the map…’

Wajahat Ali: ‘…only them elitists know where Ukraine is… sorry, I apologize…’

It was an embarrassingly unprofessional exchange that showed a complete lack of understanding even in what the right’s objections to the left really are… with a healthy dose of bigotry thrown in for good measure.

How were these clowns measuring the intelligence of Republicans their education and knowledge of … Ukraine.

What does that say about this gaffe by the head of the teachers’ union?

“They did to that flag what they did to education these past two years… pretend they care, but really, they just made it upside down,” Reopen California Schools tweeted. — FoxNews