It must be exhausting to carry all that water for the Democratic Party 24/7/365.

According to the byline, an opinion piece titled, “Republicans boast they have not pulled a Kavanaugh. In fact, they’ve treated Jackson worse” was authored by the editorial board of the paper with the slogan “Democracy Dies in Darkness” on its masthead. 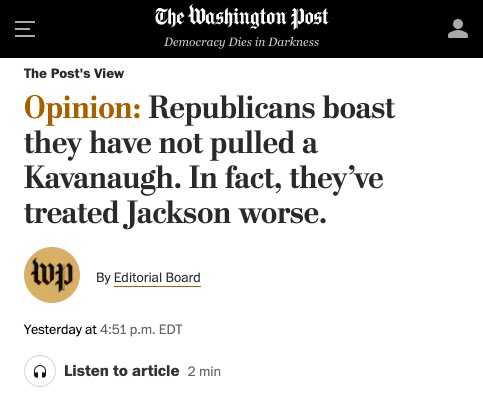 The Washington Post’s editorial board has decided to waste ink on what they’re calling the “antics” of some Republican Senators during the confirmation hearing of Kentanji Brown Jackson to the Supreme Court. WaPo argues that the questions about her judicial philosophy and examining her record have “distracted from… more productive questioning.”

But, to these partisan hacktivists at WaPo, it’s far worse than just that. In grilling Jackson on her record as a judge, this has — in their view — detracted from the real focus of the confirmation “recognizing the historic nomination of the first Black woman to sit on the Supreme Court.” (Emphasis added.)

I’m sure you’re just as surprised as I am to learn that every single member of the WaPo editorial board also holds a degree in biology since that’s what this nominee has said is required to determine what a “woman” is.

The Washington Post editorial board is itching to have a black woman on the Supreme Court because “it’s time” and they are just thrilled that Biden nominated an activist leftist judge.

Speaking of “antics” did WaPo even cover the Wikipedia activism of her former clerk who keeps her page “up to date” the way that ClashDaily did?

A quick search shows that no, they did not.

But let’s get to the meat of the op-ed. They focus on the composure that Jackson has exhibited in the face of “egregious behavior of some on the Republican side.”

Throughout her Senate confirmation hearings, Judge Ketanji Brown Jackson has been a model of composure, which is made all the more impressive by the egregious behavior of some on the Republican side.

During the hearings, Republicans such as Sen. Lindsey O. Graham (S.C.) have congratulated themselves for declining to treat Judge Jackson the way Democrats handled the nomination of Brett M. Kavanaugh. In fact, by the most relevant measures, Mr. Graham and a handful of other Judiciary Committee Republicans have handled themselves worse.

With all respect that is due to WaPo, which, admittedly, isn’t that much… are they high?

They truly believe that Jackson has been treated worse than Kavanaugh. Not only that, she is a better model of judicial impartiality for not getting emotional during questioning of her record and judicial philosophy the way that Brett Kavanaugh did when Sen. Dianne Feinstein pulled an unsubstantiated attempted rape allegation out of her backside at the 11th hour after sitting on it for some time and then all hell broke loose.

A woman credibly accused Mr. Kavanaugh of sexual assault. Democrats rightly asked the committee to investigate. After a superficial FBI review, Republicans pressed forward his nomination. In the end, it was Mr. Kavanaugh who behaved intemperately, personally attacking Democratic senators and revealing partisan instincts that raised questions about his commitment to impartiality.

Oh, look! They’re bringing out the ol’ “credibly accused” canard. There was zero credibility to any of the accusations against Kavanaugh.

Let’s be frank — Christine Blasey Ford could not remember the day or location that she was allegedly groped at a house party and every witness she mentioned had no idea what party she was talking about. That’s not credible. Her emotions might have seemed credible, her accusation was not.

But that’s not all… they allowed the absolutely clownish woman, Julie Swetnick, who was represented by the currently-jailed Michael Avenatti, to accuse Kavanaugh of running a gang-rape ring while he was in high school and she knows it was him because he was wearing his school uniform at the time.

And then WaPo attacks Kavanaugh for reacting to this clown show? Give me a break!

It was all absurd and yet, Senators like Kamala Harris, Amy Klobuchar, and Cory Booker — incidentally, all of whom went on to run to be the Democratic nominee in 2020 — took the accusations very seriously and said it’s important to “Believe All Women.” You remember that mantra, right?

We’ve gone from “Believe All Women” to being unable to define a woman in 4 short years.

The media itself was complicit in this smearing of a SCOTUS nominee in 2018 and it continues to happen every time his name comes up… just like they do with Justice Clarence Thomas.

But that’s not a “smear” according to the mental midgets at WaPo — to them, a “smear” is showing how a judge has consistently imposed and advocated for extremely light sentences on disgusting perverts who have been caught with images of children being sexually abused — jail time which is far less than the recommended sentences.

By contrast, Republicans have smeared Judge Jackson based on obvious distortions of her record and the law. Mr. Graham and others painted her as a friend of child pornographers, despite the fact that her sentences in their cases reflect the judicial mainstream. Even conservative outlets had debunked these accusations before the hearings began. The more Judge Jackson argued for rationality in criminal sentencing — or attempted to, as Mr. Graham continually interrupted her — the more Mr. Graham ranted about the evils of child pornography, which Judge Jackson had already condemned repeatedly and her record plainly shows she takes seriously.

The fact that this is the “judicial mainstream” in sentencing is the problem, WaPo. The questions by Sen. Hawley, in particular, show that Judge Jackson is an activist judge that thinks it’s perfectly fine to legislate from the bench because she doesn’t see the guidelines on sentencing for people who get sexually aroused by watching children being raped as “fair” to the sick, twisted pervert.

In general, it seems that the left cares more about the criminals than the victims — unless the victim is able to be exploited to further their agenda. It would appear from her answers at the confirmation hearing that Judge Jackson is no exception to that rule.

WaPo continues on to criticize Sen. Marsha Blackburn (R-TN) for “assailing those concerned about transgender people” by asking Judge Jackson to define what a “woman” is which is relevant since “woman” is a protected class under the law; Sen. Ted Cruz (R-TX) for “attacking” Judge Jackson for sitting on the board of a D.C. private school that is pushing “anti-racism” to students which is a hot-button issue right now in education and parents of all backgrounds are opposing it when they realize that it’s just racism rebranded.

The article ends with the WaPo editorial board pinning the blame on Republicans for the politicization of the Supreme Court confirmation process.

Neither side is blameless in the politicization of the confirmation process. But, particularly after they iced out then-Judge Merrick Garland in 2016, Republicans have done the most damage. The clownish performances by Mr. Graham and others continue them on that trajectory.
Source: Washington Post

Apparently, WaPo is unaware of the “high-tech lynching” of Justice Clarence Thomas or that the term “Borking” came about because of the outrageous character assassination of Robert Bork who never made it to the Supreme Court.

Ironically, in Ted Kennedy’s 1987 speech about “Bork’s America”, he warned about segregation, children wouldn’t be taught accepted truths, government censorship would be rampant, and “rogue police” breaking down doors of dissidents in the middle of the night. These are all things that the Democrats currently support, albeit in somewhat different forms than what Kennedy laid out. How times have changed!

They probably don’t want to touch either of those because that happened way before 2016 and both smear jobs were done by Democrats.

After all, if WaPo can’t be dishonest for their own team, then they can’t live up to that clearly stated goal of having “Democracy Die in Darkness.”

Never forget that the Regime Media pushes a whole lot of Fake News and it’s because they hate anyone who is to the right of them ideologically.