One of the few things that would get you in trouble on social media FASTER than asking questions about irregularities in 2020 elections or Feds implicated for Jan 6 involvement is mentioning a couple of drugs used to treat the Chinavirus.

When Joe Rogan successfully fought off Covid in about a day, one of the details about his treatment that came up was his use of Ivermectin. He was denounced for it, and there were calls for his removal from Spotify for spreading ‘disinformation’… which is weird because all he said was ‘I took this combination of medicines, and I got better quickly’.

The implication was clearly, ‘this medicine is unfit for people. Don’t take it.’

But when that same medicine won a Nobel Prize, it did so because it had been used by people, and used very successfully as an anti-malarial.

Several countries that were being ravaged by Covid when there was no prospect of getting a vaccine rollout ahead of the infection turned to Ivermectin, a cheap and readily available drug, with great success. How much success? Enough success that India’s Bar Association is suing the WHO for advising against the use of Ivermectin.

As for the studies that discredited Ivermectin, we’ve peeked behind the curtain with the doctors responsible for looking at those studies, and saw how politics, money and influence were elevated above the actual data they had been working from here: ‘CORRUPTING THE SCIENCE’: Whistleblower Calls Out Falsified Ivermectin Report From Jan 2021 … Discrediting A Lifesaving Drug

If those ‘horse dewormer’ people weren’t looking ridiculous enough, it gets better.

While everybody was busy trying to discredit it, some actual researchers were busy doing their jobs and getting results. They were testing Ivermectin as … a cancer treatment.

The photo below is ‘clickable’ and can take you back to the original study. Notice we’ve drawn attention to both the headline and the date. 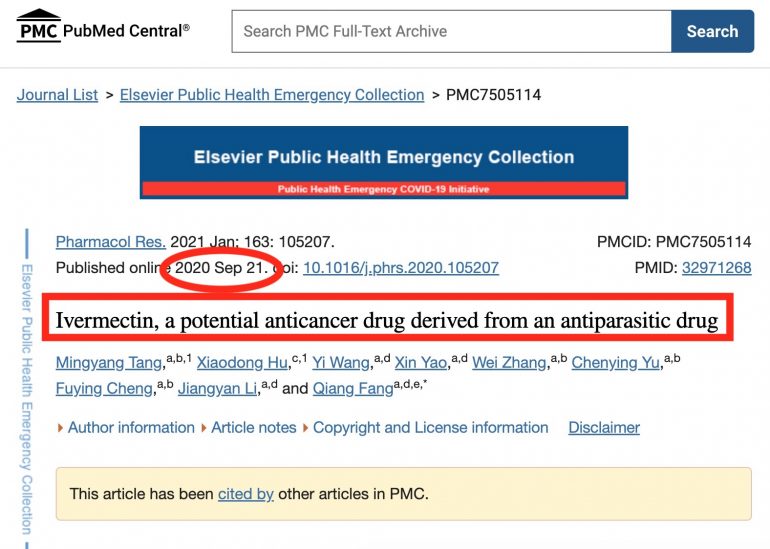 As you read on, notice that this NIH peer-reviewed study — cited by other studies — has nary a mention of veterinary medicine. It speaks very optimistically of a wide spectrum of potential anti-cancer treatments with applications for human patients clearly in view.

What cancers did Ivermectin show promise in treating?

Here are the cancer varieties mentioned by name in the study:

It can also work in tandem with chemotherapy to increase its effectiveness.

This ‘horse dewormer’ has some pretty good medical potential.

And that study was released in September of what year again? That would be 2020. It’s almost as if we’ve been systematically lied to by people who know better.

Gee, why do you suppose the public has been losing trust in our medical ‘expert’ class?