Partisan parroters of Democrat talking points in the press spent most of the past month running interference for Joe Biden’s SCOTUS nominee, squealing with outrage any time a Republican dared bring up questions about such scandalous and irrelevant points as her judicial philosophy or her record of past rulings.

But she’s been confirmed now and all of that is ancient history. Now there are other Democrat agendas that need safeguarding: like the government’s right to micromanage every aspect of our lives.

Now that a Trump-appointed judge has slapped down the Administrative State’s habit of using Alphabet Agencies as a work-around letting Democrats rule by executive fiat when they couldn’t do so through actual laws passed by Congress, the media are very, very vexed.

Here is the ruling to which they objected: 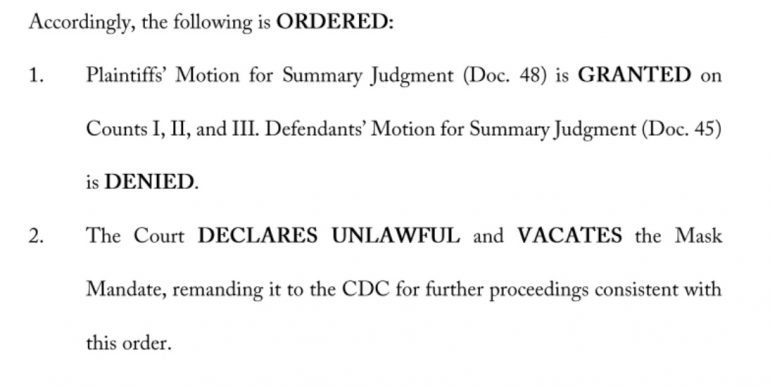 Mandatory federal mask mandates for travel have officially been shut down.

The mask requirement covered airlines, airports, mass transit and taxis, and was the biggest vestige of pandemic restrictions that were once the norm across the country.

The decision by U.S. District Judge Kathryn Kimball Mizelle in Tampa, an appointee of former President Donald Trump, also said the CDC improperly failed to justify its decision and did not follow proper rulemaking procedures that left it fatally flawed.

…The judge said “a limited remedy would be no remedy at all” and courts have full authority to make a decision such as this — even if the goals of the CDC in fighting the virus are laudable.

“Because our system does not permit agencies to act unlawfully even in pursuit of desirable ends, the court declares unlawful and vacates the mask mandate,” she wrote. —TampaBayTimes

Predictably, for those who have fallen in love with the Nanny State, this news was not received with relief or joy.

Instead, the same people who circled the wagons around Biden’s judicial nominee wasted no time in bringing out their knives for Judge Mizelle herself.

As a baseline ‘just the facts’ comparison, here is how a right-leaning group shared this story:

The mandate was struck down, the judge ruled it unlawful.

The ruling itself was some 59 pages long and gave a detailed account of the issues at hand.

I encourage everyone to read US District Judge Kathryn Mizelle’s 59-page ruling in favor of the plaintiffs in striking down the federal transit mask mandate. It’s thoughtful and evidence-based: https://t.co/RiFYxdUCGc @DrJBhattacharya @adamcarolla @ZDoggMD @afshineemrani

Having taken the time to read it here at ClashDaily, we agree with Dr. Hemmati.

Not that the partisan media types would care, but this lies at the core objection:

As for the particular party seeking redress, it involved a frequent flier with an anxiety disorder which is not exempted from mask-wearing, even though wearing one worsens the plaintiff’s condition.

In short, the CDC published a mandate that exceeded any legitimate scope of its lawful authority.  Here is a window into the deliberations:

The ruling went into such wide-ranging issues as linguistics of the word sanitation, quarantine, police powers, federalism, the implications of ‘conditional release’ as the mandate’s enforcement mechanism, and failures to justify the pressing need to bypass the 30-day public consultation period. The ruling identified several specific deficiencies in the CDC’s process of rolling out this mandate ranging from the exercise of authority beyond the scope of the law, to failure to involve public consultation, to failure to offer a reasoned basis for the agency’s action.

Alright, what did the other side have to say?

The usual simplistic partisan blistering outrage. They can’t impugn the message, so they’re shooting the messenger.

This guy is from Slate.

This is why the public lost confidence in them in the first place.